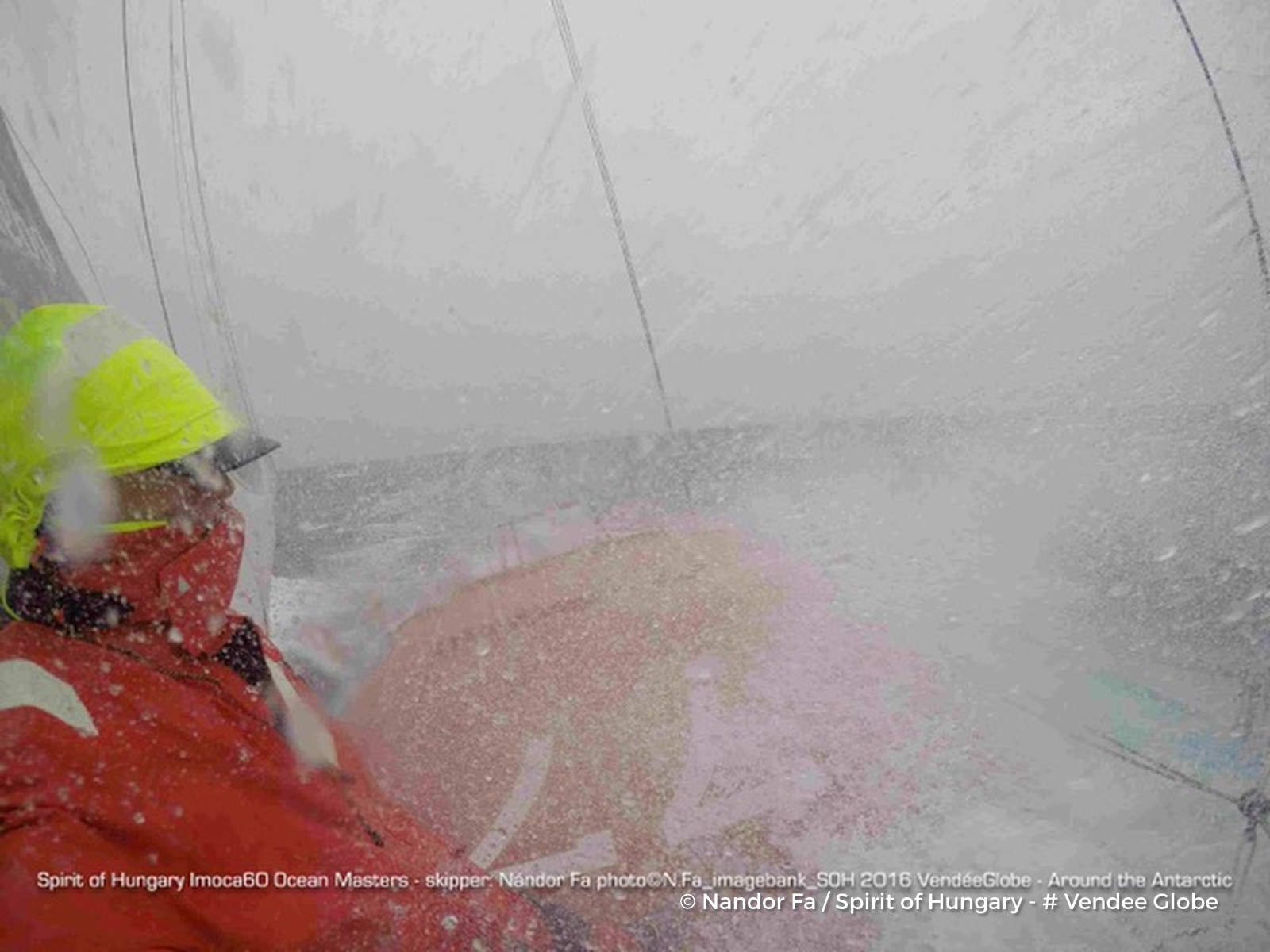 Hungarian Vendée Globe skipper Nandor Fa is having the race of his life in the Vendée Globe. The 62-year old wrestler, turned canoeist turned Olympic sailor, who came back to solo ocean racing after a 20 year hiatus to compete in this pinnacle event of shorthanded sailing, is expected to pass Cape Horn on Sunday morning. This Friday afternoon Fa is some 620 miles shy of Cape Horn and his release from what has been a tough Pacific ocean for him and the IMOCA 60 which he designed himself.

When, 30 years ago, he was making his first passage round the famous cape in a 31 foot cruising yacht which Fa and his friend had built from a bare hull, the current Vendée Globe leader Armel Le Cléac'h was a nine year old in his Optimist at home in Morlaix Bay. Fa and his friend had sailed away around the world as their expression of freedom from a political regime which, showing solidarity with the Russian boycott, banned Fa from taking his place as the Finn class representative at the 1984 Olympic regatta in Los Angeles. Since then Fa has been round the Cape two more times solo, during the BOC Challenge in 1990, in his first Vendée Globe in 1993 in which he finished fifth, and more recently during the Barcelona World Race when he sailed with Conrad Colman in 2015. Fa's Vendée Globe is far from finished, but the Cape will mark a big emotional milestone. No skipper has the right to finish the Vendée Globe, but Fa has certainly endured enough hardship and frustration in recent years trying to get to the start of this race to at least be granted a safe passage round the Horn.

The Spirit of Hungary which he built in Hungary, overseeing most of the construction, hands-on for much of the time, suffered structural delamination in the Atlantic in 2014 on his way to New York for his first race. He had to repatriate the boat by cargo ship, re-laminating and refitting much of the hull, before only just winning a race against time to start the Barcelona World Race. Some weeks from the start his chosen co-skipper chose to stand down as he feared that he had not yet the experience to contribute safely alongside Fa. Colman stepped in. But the Pacific is not giving in easily to Fa, who said this afternoon, “It makes me happy to be getting closer, but it does not come easy. I am fighting for each and every mile. The wind is not easy. Yesterday I had a terrible night and day and all the waves were coming from ahead and the boat was so slamming I was afraid for the boat. I am moving and I am happy. It is so freezing cold. You can only work outside for a couple of minutes. It is six degrees in the cabin. The boat is OK. I check everything regularly and I always find something. I am really, really keen to be there. It is so cold. It is so difficult, everything. I am really fed up with the Pacific Ocean right now.”

The Doldrums are becoming slow and sticky at times for race leader Armel Le Cléac'h (Banque Populaire VIII) but sometimes he has still been managing to make 15kts in the squally gusts. Second placed Alex Thomson (Hugo Boss) is still with a decent SE'ly trade wind and so scything into the French skipper's lead once again. Already today he has reduced Le Cléac'h's deficit by 100 miles to 235 miles and was still making 21kts of average speed.

In third place Jérémie Beyou gets into more established E'ly trade winds and also starts to accelerate at some 700 miles behind Thomson. There seems little doubt that the Doldrums will compact the first three, while the North Atlantic is a strategic chessboard. Alex Thomson said today: “It will be interesting to see how it all pans out in the next couple of days. After the Doldrums into the North Atlantic and we are upwind, it is kind of an unusual situation and the models are not really agreeing. It is not really clear how to find a path through the mess and in to Les Sables d'Olonne. With these scenarios in the North Atlantic it does create some opportunities and what I need is an opportunity to close in on Armel and be able to challenge for the lead. Change is good for me.”

On the Epiphany, the day of the Three Kings is celebrated in European countries, but the wily King Jean Le Cam – also a three times winner of the Solitaire du Figaro – has proven masterful at staying with Jean-Pierre Dick and Yann Eliès. It is the consistent speed and rhythm of Le Cam that impresses his nearest rivals at the moment. The veteran 57 year old who finished second in 2004-2005 and fifth in 2012-13 is now up to fourth, moving ten miles ahead of Eliès and 20 miles ahead of Jean-Pierre Dick. Le Cam races the Farr designed yacht which won the 2008 race as Foncia which was extensively remodelled before winning the Barcelona World Race with Le Cam partnering Bernard Stamm.