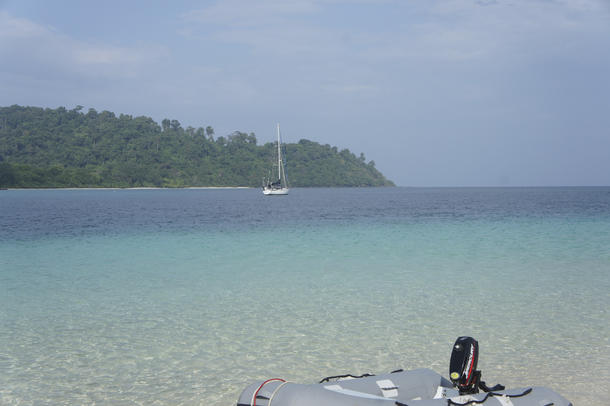 View towards Elizabeth Jane II over the lagoon formed by the Surin Islands reef.

After spending six weeks of day sailing and island-hopping our way through the spectacular cruising grounds of the Krabi Coast, Phang Nga Bay and the western side of Phuket, we were making way for the almost deserted Surin Island group in the north west Thai waters adjacent the Burmese border.

We had seen and experienced some of Thailand’s most breathtaking natural beauty such as soaring limestone cliff faces towering above us while we swam and relaxed on the soft silica sandy beaches; or the beauty of the aqua waters of the southern Thai islands. We were also weary of the omnipresent tourism sector that was in every islet or beach location no matter how seemingly remote, filling our ears with the drumming of the wooden Thai longtail boat engines or a speedboat disgorging hundreds of snorkelers in red life jackets into the pristine water below.

We were spoilt yacht owners who were seeking some idyllic paradise location to enjoy Christmas in peace and relative solitude.

The 14 hour, beam reach overnight sail from Khao Lak on the western side of the Phang Nga Province was marked by the hundreds of timber fishing boats lighting up the horizon and filling our ears with the humming of their engines.

The moon was rising late and the night brought vivid phosphorescense glittering in the black water we carved through as shooting stars tracked across the darker canvas overhead. The three hour helming shifts were a particular struggle because we were out of practice after day sailing for so long. Getting up at 2am was hardly something that one looked forward to.

We rounded the southern end of Koh Surin Tai with the wind whipping up to 25 knots and the sun spreading a pink hue across the grey dawn sky. We turned into the sheltered bay on the western side of Surin Nua and Surin Tai amazed by the clear water and aqua-coloured reef at the base of jungle covered hummocks.

Surin Tai crept towards the sky reaching 335 metres and beating its northern rival Surin Nua with its height of 314m. Surrounded by Thai fishing boats sharing a mooring, we arrived at 8am and easily picked a National Park mooring before promptly going to bed.

After a quick nap we were greeted by the National Park officers who came to our boat
via an outboard powered RIB. While they spoke limited English we paid the four-day park fees and gleaned some information from the officers, there was a walk on Surin Nua and two bungalow restaurants opened for three meals a day run by the national park co-op. We were excited at the prospect of going for a walk and exploring some of the dense jungle that seemed to enclose the hilly landscape to prevent entrance by visitors.

Admiring our slice of paradise

After a quick brekky we headed out. Snorkelling on the eastern side of Surin Nua island was absolutely magnificent, with abundant tropic fish life and some interesting coral spread all throughout the bay.

We enjoyed two hours on that first day exploring the fascinating aquatic delights of the reef, spotting clown fish, sweet lips, moray eels, clams and listening to the crunching sounds of the parrot fish munching on the coral heads.

A rich array of soft and hard corals were on show, providing the landscape for the fish to meander in their underwater world. With water at about 28° Celsius we could have stayed in the water all day.

A refreshing 15kt wind kept the 38°C heat of the day pleasant, providing us with a clear blue sky as a backdrop to the luscious green jungle tumbling down the hills. The glittering diamonds of sunshine on the water made the spot all the more idyllic.

The contrast of the seemingly impenetrable deep green foliage with the blue and aqua waters and white silica sand beaches was something that we spent hours admiring.

We were not the only ones soaking up the view, a graceful chestnut Brahminy kite soaring above keeping a sharp eye on the abundant feeding ground below.

The beauty of the place is hard to describe but was exactly what we had been dreaming of all those months ago while working in offices in Sydney before making the big leap and taking
an extended break.

On a trip ashore to Surin Nua we investigated the simple but tasteful onshore accommodation, restaurant and information centre managed by the National Park. This was the best managed National Park we had visited on western Thailand. It made a refreshing comparison to the commercial tourism in the other locations. The distance from mainland Thailand made day-trips unfeasible so the only visitors were those on private boats or patrons of the National Park accommodation. This location was just exquisite, the relaxed atmosphere made for a fabulous tropical Christmas.

We went on a number of long dinghy trips, exploring the many coves and beaches within the lagoon area.

The reef and its abundant fish life were visible below the water and we would dive off the dinghy to paddle around and view the fascinating ecosystem. The adventures that you could have here were seemingly limitless and we barely scratched the surface in our four day visit.

We had meticulously planned a trip to the Khao Lak markets four days prior to pick up a fresh piece of pork, which with Hugh’s hilarious hand gesturing with the lady at the market, we learnt was from the rump of the pig. After many months in Indonesia and Malaysia, roast pork was going to be a real treat and one that we were really looking forward to, even if a traditional English dinner was a strange choice for a tropical Christmas.

On Christmas Eve we had a busy day of snorkelling and bush clambering along the dense jungle of the signposted two kilometre nature walk. We landed at Ao Mai Ngam beach on the western side of Surin Nua, where there was another small camping area with holiday-makers casually relaxing on the white sandy beach, paddling in the clear lapping waters and generally enjoying their remote getaway.

We backtracked along the walk and made our dinghy trip back to the boat where we set up our Christmas tree which consisted of a pineapple with a yellow rubber duckie as the angel and some solar Christmas lights tied to the mast. Under our makeshift tree we placed the presents given to us some eight months ago in Sydney by friend Krissy and Hugh’s sister.

We settled back in the cockpit to watch the bright red orb of a sun set over the Andaman Sea and toasted our blessings with rum cocktails.

Christmas day was glorious with bursting golden sunshine. After food preparation for our roast lunch, we set off on a snorkelling adventure on the Koh Pachumba reef where we enjoyed the playful antics of the clown fish and some sneaky moray eels. If I could breathe underwater I could spend all day watching clown fish dancing in soft coral and wagging their fins when you come near.

To be able to snorkel in such exquisite water with no one around was truly special and is one of the defining features of the Surin Islands.

Returning to the boat we marked time by indulging in some pink champagne which made the protracted lunch cooking time in our slow oven less tedious. For a late lunch feast we tucked into our roast pork, potatoes, onions and carrots with crackle, Yorkshire puddings and lashings of fatty gravy! An excellent meal was had as we cracked open our last bottle of Australian Shiraz we had saved for such
a special occasion.

The only other sailing boat in our lagoon was owned by Dick and Anita, fellow cruisers on Kind of Blue who had spent eight years sailing around the world from the Netherlands. We had Christmas night sundowners and a light dinner ashore at the restaurant together, which was lovely. They were wonderful company and told many stories of the exotic island locations they had visited.

They had sailed to other Southeast Asia destinations that we would be embarking on in the coming year so it was great to get some advice and information on the anchorages. We were constantly surprised by (and often the beneficiaries of) the experiences of other cruisers and the detailed information that they kept about their travels to provide to other cruisers.

After a lovely Thai dinner of chilli chicken and rice at the co-op we picked up two t-shirts at the tourist counter and that was that, a superb Christmas in a breathtaking location. Just us, the fish and some new friends.

Our time at this idyllic Christmas island destination was fulfilled in every way and we could not be luckier than to be here on our own boat. Where would we be for next Christmas?

Well, we will see where the winds take us!