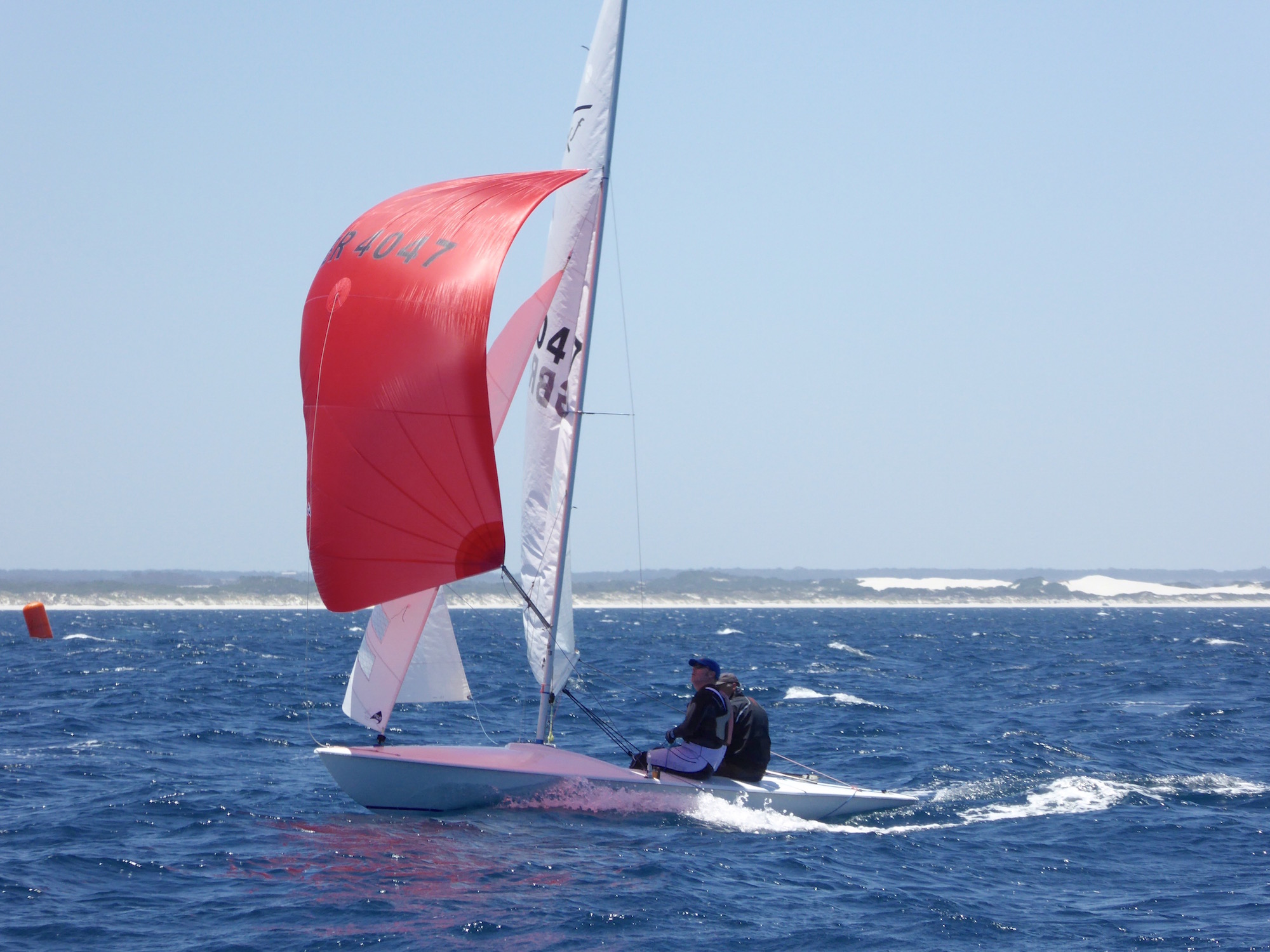 Just another day in sailing paradise as 40 Flying Fifteens took part in day 3 of the Gemmill Homes Flying Fifteen Australian Championship in Esperance.

Clear blue skies, warm temperatures and a superb day of steady breezes ranging from 15 – 20 knots and a 1m swell. Three more races using a variation of courses made for an exhausting but thoroughly enjoyable days racing.

Race 5 of the championship was called a general recall so a quick fix on the pin and away we went again. Clean this time with most of the fleet favouring the left hand side of the course. John Wilson & Matt Summers (Ffast Lane 4) pop the dayglow yellow kite in the lead followed by (Glamour Buoys) Greg Leaversuch & Peter Barblett and the familiar blue kite of Nick & Janet Jerwood (Ineffable) with another (Ffast Lane) Ashley Smith & Adam Kingston from Queensland in the mix.

In lap 2 these four boats arrive at the leeward gate in a row and two go left and two go right. The three leaders remain the same but Alan Bax & Simon Childs (Fforever Young) are rising through the ranks to challenge.

On the final triangle Wilson & Summers have around a 100m lead but its never enough with the Jerwood's in pursuit. Around the final wing mark and a fast reach to the finish. Wilson goes high to protect height whilst the Jerwood's sail fast and low, surging past to take the gun. Wilson & Summers settle for 2nd and a slightly fluffed gybe by the Glamour Buoys leaves the door open for Baxxy to slip past to snatch 3rd. The chasing pack became a private battle between the Royal Freshwater Bay YC boats finishing 4th – 7th.

Same glamour conditions for race 6 and another clean start. This time the Brits lead round lap 1 chased by the hungry, ex Brits (now Aussies), the Jerwood's. The ever consistent Wilson / Summers combo from SoPYC fight for 3rd with the RFBYC pack. Although there were changes in the minor placings, the race was on to see if Bax & Childs could hold off the charging Jerwood's. On every hoist and every gybe they seem to be just a bit slicker than the rest of the fleet so the pressure was on in every manoeuvre. On the final gybe at the wing mark, spectators expected the usual scenario but the multi championship winners from Hayling Island in the UK, used all their experience and skills to hold off the charge to finish the job and claim their first bullet of the regatta. Jerwood's second and Wilson / Summers 3rd. Yu & Nelson (Tuffan Up) finish 4th and Chris Paterson & Ed Repsevicius (Storyteller) and excellent 5th.

The breeze was gradually getting a bit stronger with some big gusts but a third race of the day was irresistible so a weary fleet lined up one more time. There were a few left shifts this time necessitating a bit of shuffling of course marks and a slightly longer course with an upwind finish.

A cracking start at the pin by the Queenslanders Smith & Kingston and the fleet working the offshore (left) side of the course. Rounding first was the in form Brits Bax & Childs with Greg Tonnison & Mark Lovelady (Spot the Difference) on their stern and the Jerwoods breathing down their necks.

With their slick boat handling and turbo downwind speed the unstoppable Jerwoods surfed past into the lead. Tonnison & Lovelady also slip streaming past the Brits on the triangle. The last upwind work to the finish the mighty Jerwood machine extended away to take the gun and have one hand on the title. Tonnison & Lovelady just held off Bax & Childs and Philippa Packer & Dean McAullay recovered with a late surge to take 4th.

Nick & Janet sum up their day: “We were pushed very hard in all the races, its very tight, there is very little difference in all the boats, they have all been around for a while so everyone knows the settings to make them go fast so there are very small differences. Its just about how hard you work and where you position the boat on the course. Can you get off the start line and stay clear?.

“You would struggle to wish for something better than we got today, it was great sailing, a good fleet, good courses, a full range of wind conditions, excellent competition on the race course. Even after the finish when you turn round to come back to shore you have a spinnaker reach to die for, you don’t get sailing like that anywhere its perfect!”

Special mention goes out to Bill Shand and his crew David Parish from Gippsland Lakes in Victoria. Bill is an 87 year old veteran of Flying Fifteen sailing and has finished every race and currently sits mid table in the championship. He builds all his own boats and trails them across the Nullarbor to compete in WA. He is a legend.

Contrasting in ages, the youngest competitors JJ Wallace (18yrs) and Sam Gardner (21yrs) from Esperance Bay YC had finished all their races but were not so fortunate today. JJ was rammed by his dad John, taking both boats out of contention and no doubt causing a family row at the dining room table over a large repair bill!

The final race of the championship takes place on Thursday morning when a slightly alarming forecast for air temperatures of 40 – 45 degrees and a wind forecast from nothing to everything and the kitchen sink! So an early start time of 1000 hrs (local) is scheduled before the fleet melts under the Western Australian sun.

Nick and Janet Jerwood for SoPYC have sailed an impeccable regatta but the remaining podium places are undecided as a second discard comes into play after 8 races are sailed so all to play for on the final day.