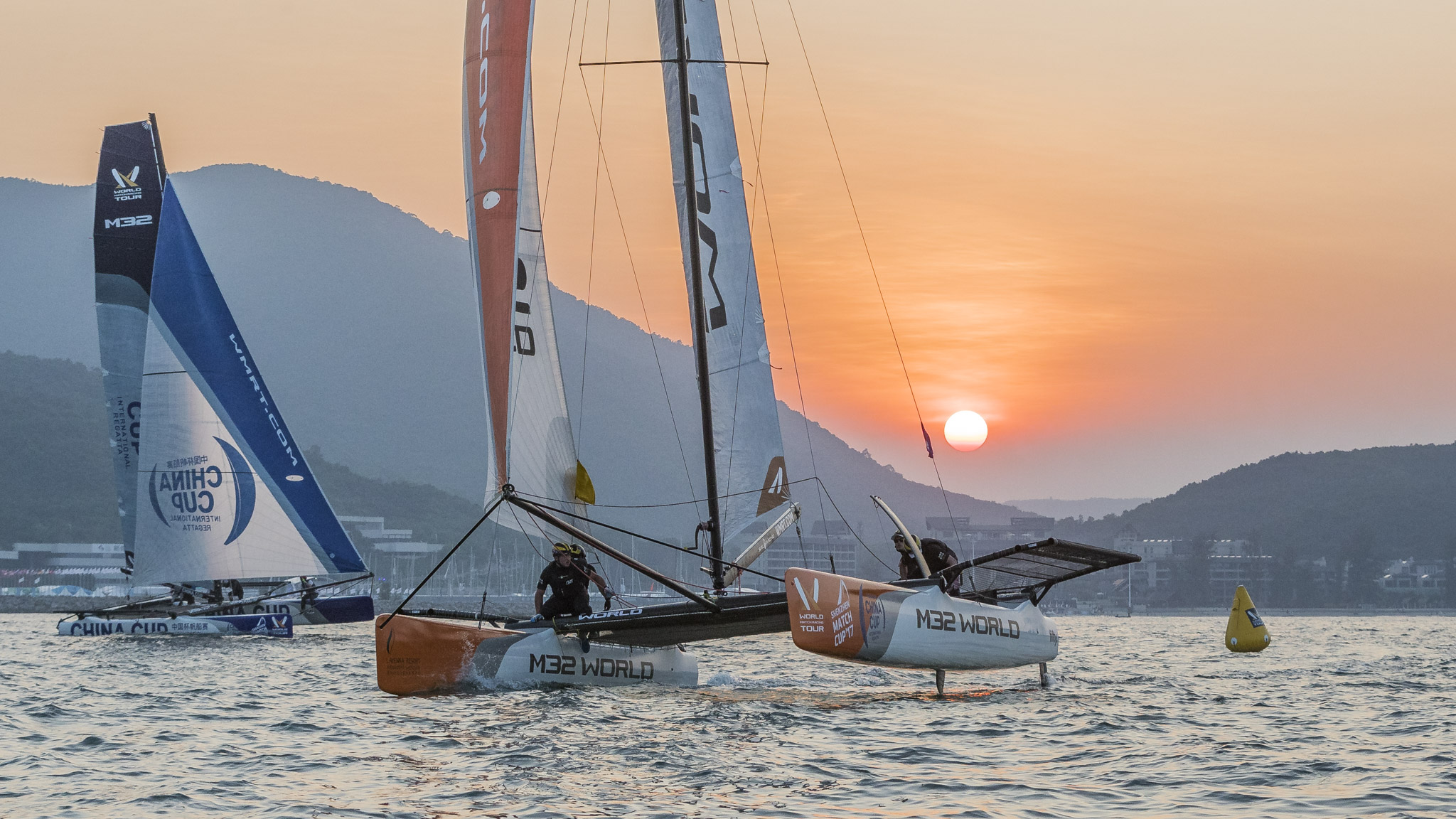 Shenzhen, China: After a day of very little wind at the 2017 Match Racing World Championship, the breeze kicked in for the final hour before sunset and the drama unfolded.

Defending world champion, Phil Robertson, was on the ropes against young Australian Harry Price, but a gust from heaven combined with an enormous wind shift blasted the Kiwi past his rival and into the Semi Finals.

After catching up by more than half a leg, Robertson made no secret of his good fortune this evening. “That was the day, better to be lucky than good,” he smirked.

“It was a pretty brutal day today – nasty conditions out there – big shifts and puffs and holes everywhere. Difficult to navigate around the course but Harry Price did a nice job. We had the better of him twice in the starts but he managed to sail around us twice and I guess we're lucky that we were able to get past him at the end with a massive shift.”

Meanwhile another Kiwi, Chris Steele, made short work of the six-time World Champion Ian Williams, as GAC Pindar crewman Richard Sydenham admitted afterwards. “It was very shifty all the time, and there were some crucial wind shifts about 20 seconds before both starts,” said Sydenham. “We weren’t fast enough to respond and Chris just sailed too well for us to be able to get back to him in either match.”

Steele’s confidence is growing by the day, and he’s looking forward to a Semi Final against his fellow Aucklander Robertson. “Phil's had a target on his back all year and we've got an opportunity to take a pop at him which is really exciting.

“We know that if we sail like we did today we can beat anyone. If you look at our progress over the season we've been building up all year. We're very confident with the way we're sailing and we're just getting better and better every time we go sailing.”

The young Kiwi knows he’s up against a competitor who won’t give an inch and is a master of the ‘smash n grab’, as he was against Price today.

“We saw Phil's lucky moment watching from the hotel,” said Steele. “It's been like that all year, but you can't take it away from him. He seems to be getting the rub of the green a lot, but you have to give him credit that he puts himself in positions to take those chances.

“Harry’s lead in that last race looked unassailable and we were sitting hoping that he would go around the right-hand mark at the bottom; but he went left and that was going to give Phil a chance, and sure enough, he snuck through.

“We have gone over different processes about how you shut those opportunities down; that's what we did today with Ian and if we keep putting our boat in the right place then it makes it hard for the other boat to get any chances.”

Robertson is billing his upcoming match with Steele as the “Battle of the Bridge”. “We both grew up in Auckland. I live the right side of the Bridge and he lives the wrong side.

“We faced off in Sweden in the Quarter Finals and we managed to get the better of him there. But Steeley’s going to come out swinging tomorrow. He's got nothing to lose and it'll be a good match. We've had a good season, won all bar one of the Tour events, but this is the big one, the one we've been ramping up to do all year.”

Torvar Mirsky has also lined up a spot in the Semi Final stage after dispatching David Gilmour 2-1 in their Western Australia derby. Yann Guichard is 1-0 up against Taylor Canfield but the plan is for first-to-two points in their Quarter Final, the winner of which will go up against Mirsky.

There’s a forecast of more breeze for the final day which, if it materialises, will come as a great relief to the sailors. If today was more about being lucky than good, every competitor would rather see Sunday’s Final decided by superior skill than good fortune.