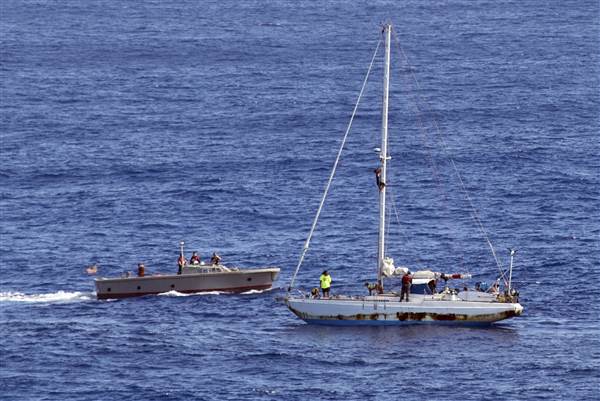 Sailors from the USS Ashland approach a sailboat with two Honolulu women and their dogs aboard as they are rescued after being lost at sea for several months while trying to sail from Hawaii to Tahiti. Jonathan Clay / U.S. Navy via AP

When I first saw this one, a few things didn't ring true. Tiger sharks that big? Attacking a boat? And a broken spreader that couldn't be jury rigged? The mast was still up. They managed to contact a fishing boat via VHF but couldn't raise other boats they claimed to have seen. VHF is line-of-sight.

And neither the women nor the dogs looked to be in a bad way, as you would expect. Fortunately, someone has done some “due diligence” and suggests this is a hoax. Check out the NBC report, then look at what Linus Wilson has to say and finally check out another mainstream news report which highlights more inconsistencies:

Two American women lost at sea for five long months have been rescued after a broken spreader on their mast and a disabled engine took them thousands of miles off course.

Jennifer Appel, 48, and friend Tasha Fuiava were found by a Taiwanese fishing vessel around 900 miles southeast of Japan, the U.S. Navy said Thursday. A Navy ship based out of Sasebo, Japan, rescued them on Wednesday morning Japan time.

On May 23, the women set off from Oahu bound for Tahiti, about 2,600 miles away, but problems soon arose. First, a piece of the mast called a spreader failed, Appel said, limiting the sailboat's maneuverability, and on May 30 a storm flooded the engine. Communications were also impacted.

Appel and Fuiava described a sense of despair after making daily distress calls for 98 days straight, but the calls were out of range. They spotted other ships that did not or could not respond, and fired at least 10 flares. Twice the ship was attacked by Tiger sharks, they said.

“I could see light and I could see vessels, and once you get closer, we thought it would be close enough to do a [distress] call,” Fuiava told TODAY. “When they would turn and keep going, yeah, it was kind of sad.”

The women were rescued along with their two dogs, Zeus and Valentine, who had been aboard with them. While the dogs provided an immense source of comfort during the ordeal, at times Appel and Fuiava feared they would tip off sharks circling around their boat.

“I went downstairs with the boys and we basically laid huddled on the floor and I told them not to bark because the sharks could hear us breathing. They could smell us,” Appel said.

Continue reading and watch the video at NBC.

Linus Wilson of Slow Boat To Cuba thinks the story is very fishy. Here's his reasoning:

On October 25, 2017, the USS Ashland rescued Hawaiian sailors Jennifer Appel and Natasha Fuiva from the sailboat SV Sea Nymph. They claimed to be adrift for five months unable to reach land. Many of the details of the story: 50-foot sharks, their battling of a force 11 storm, and the size of their boat do not check out.

Check out this one from the Belfast Telegraph which addresses more of the “inconsistencies” (I'm being kind here) in the womens' stories: http://www.belfasttelegraph.co.uk/news/world-news/rescued-women-defend-inconsistencies-in-account-of-ordeal-at-sea-36279902.html