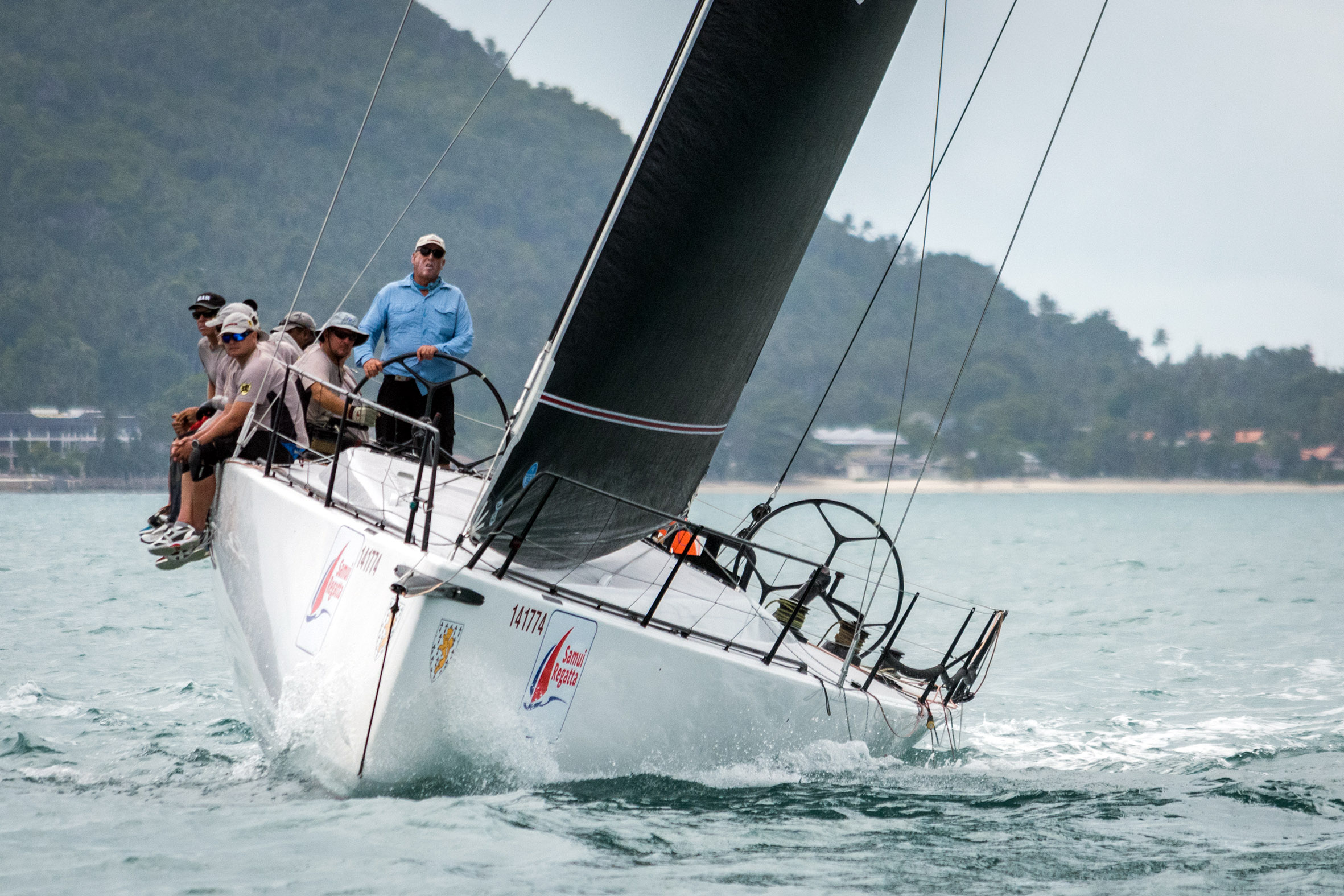 Samui, Thailand – Ahead of the game after just three days of racing, Race Officer Ross Chisholm sent all classes south on a coastal courses today – 30nm for IRC Zero, 22nm for IRC One and 18nm for Cruising and Multihulls – and following the Lay Day, some of the crews looked a little rusty.

As the fleet neared the bottom mark on their respective courses the 10 knots of breeze on the start line was forgotten as the wind softened to a whisper. Early gains were narrowed, but as the breeze picked up again the competitors readied for their final runs to the line.

With three classes topped by undefeated boats, all was to change today. The challenging conditions tested both skills and patience and the Chinese team arrived, the back markers became front runners, and new names made it on to the podium.

The all-conquering TP52 of Kevin and Tom Whitcraft, struggled in the fickle winds and never managed to find their rhythm, settling for third place in IRC Zero and with it losing their record of clean sheets.

After more than four hours of racing it was the smallest in the class, Marcel Liedts' Ker 46 Zannekin that converted their last across the line into a handicap win – their first win of the series – and with that they edge out a two point lead over third place overall, and second on the day, Sam Chan's TP52 Free fire, with one day and a maximum of two races remaining.

David Dim mock’s Club Swan 42 Loco has been quietly dominating IRC One with a consistent string of second and thirds, plus a single win, but today is one they'll happily discard. A fifth on handicap was not what they wanted heading into the final day, and this was compounded by Gary Bagley’s Fuji pulling out all the stops to secure a first place when it mattered, closing the gap to Loco in the overall standings, which now stands at just two points.

Competing for their first time at the regatta, the all Chinese crew on the Beneteau First 40.7 Ocean Knight have been making improvements race by race and today outsailed all but their bigger Beneteau brother to take second place, a conformable four-and-a-half minutes ahead of the modified Sydney 40 East Marine Imagine on corrected time.

Chris Mitchell's undefeated Cruising class record on his Nauti 40 Lady Bubbly came to a halt as the X-99 Sail Quest Hi Junks, skippered by Tim McMahon and with a student crew on board, sailed a clever race to win by just two minutes on handicap, after more than four hours of racing.

Elsewhere on the race course another undefeated record fell as Nut Thongtoam's Multihull Solutions H3O lead from start to finish only to not cross the finish line, score a DNF, and gift the win to the ever-persistent Pixalux, skippered by Mick Tilden.

Hosted by Centara Grand Beach Resort Samui for the 16th consecutive year, the regatta is organised by Regattas Asia in conjunction with the Samui Yacht Club Regatta, under the auspices of the Yacht Racing Association of Thailand, the Municipal of Koh Samui and the Sports Authority of Thailand. Racing finishes tomorrow off Chaweng Beach.