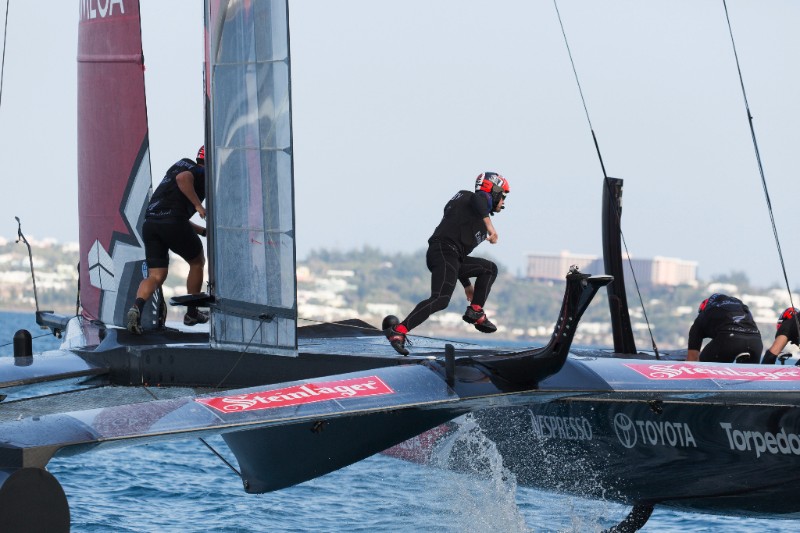 Emirates Team New Zealand will begin their fight for redemption from San Francisco tomorrow when racing kicks off with the Louis Vuitton America’s Cup Qualifiers in Bermuda. After four long years of reflection, rebuild and refocus the team is excited by the challenge ahead.

“This is the moment we have all been waiting for. Everything we have been working so relentlessly towards over the past four years has been focused on this date- the 26th of May 2017.” said Skipper and helmsman Glenn Ashby. “It really is hard to reconcile everything we have been through as a team since San Francisco. We’ve had so many  ups and downs, but everything that has happened has really made this team such a strong and unified group over that time and every team member is looking forward to it. You can sense the increase in intensity around the base. It is race time.”

All indications from weeks of practice racing out on Bermuda’s Great Sound is that there are at least four very evenly matched boats in terms of speed on the water. So talk is now turning towards the differences between winning and losing coming down to boat handling, wind shifts, race tactics and,perhaps most importantly, starting strongly.

“I think it is fair to say this is going to be without doubt the hardest regatta we will have ever done as sailors. But I know with the group of guys we have onboard that they are really looking forward to the challenge before us. It is the pressure and the intensity that these guys thrive on so we are looking forward to the gun,” explains Ashby. “Don’t get me wrong, this is going to be anything but plain sailing for all of the contenders. There will be ups and downs and good days and bad days, and the team that deals with the adversity the best is more than likely to come out on top.”

When asked if Emirates Team New Zealand is ready, Ashby replied, “We are as ready as we could possibly hope for. You always want more time, but what we have achieved in the time and with the resource we have is unreal, especially when you compare to some of the other teams that have been on the water for over a year longer than we have, and have plenty more resource. We know we are in the game, and we know we have got here through plenty of old fashioned kiwi ingenuity, creativity and hard work. And this won’t stop until our last race – whenever that will be.”