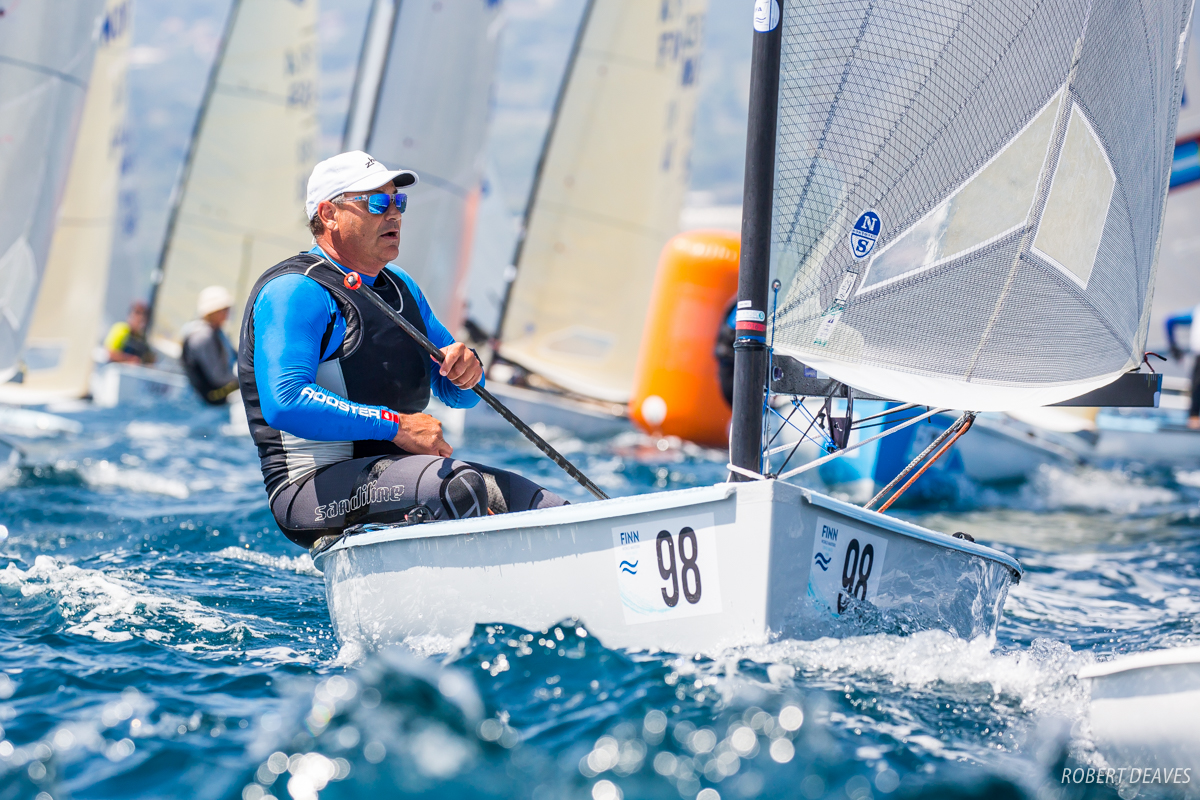 After three days without wind, the 2018 Finn World Masters finally got underway on Wednesday with three glamour races at El Balís.

The 350 boat fleet, split into four groups, each sailed three races in a sea breeze that built from 7-12 knots during the day. The 1988 Olympic champion, José Luis Doreste, from Spain, leads the 350 boat fleet from Giacomo Giovanelli, from Italy, and Aleksander Kulyukin, from Russia.

Racing was rescheduled to start at 12.00 to make best use of the best forecast of the week. The first two days of racing, and the practice race, had been abandoned due to lack of wind.

As expected the race management was perfect with quick turnarounds, square lines and true beats. The fleet was coming ashore by 15.30 after three fantastic races. It was just a great day to be on the water racing Finns.

In the Yellow fleet Doreste and Giovanelli shared the line honours. Doreste was unsure about his speed before racing started and surprised himself with how well he sailed. “We had a very nice day, the wind was not too light, not too strong, and I hope we have another two days like this so we have a very nice championship.

“If I had to choose the wind strength to sail in, it would be what we had today. My boat is very powerful and I have good speed, so I had a very nice day with a 1,2,1. Much better than what I expected.”

Giovanelli, added, “I think it was a very good day. I won one race and in the other had two seconds. So, actually a wonderful day. The conditions were good for me as I am not so heavy. I had great speed and 10 knots is very nice.

“I know that that the guy who won two races in my fleet was Doreste, so for me it is great to race against him and beat him. I hope the next days will be windy so it will be very nice for all the fleet.”

In the Blue fleet, race wins went to David Huet, from France, Matt Visser, from Australia and Xavier Penas, from Spain. The 1977 Finn Gold Cup winner, Joaquin Blanco, opened with a 2 and 3, but then slipped up with a 19th to sit in 15th overnight.

“Three good races for all the fleet. A shifty day but it was quite good for me.

“I had two good races and one further back, as the wind shifted to the left on the last one. I am happy with the first two races, but I also got a jury penalty in the second one when I was second.”

Visser is two places higher in 13th, after an exceptional day on the water with a 5, 1, 15. He explained, “I have got Jake Lilley’s mast and boat, so I just had speed to burn upwind. In the first race I made some stupid mistakes, but in the second I just kept out of trouble. Blanco was just behind me, he got pinged on the reach, which helped. But he was going faster than me downwind; in fact there were a lot of guys going faster than me downwind. I was just trying to start clean, but nothing makes you look smarter than speed.”

On the other course areas, arguably the harder fleets with most of the favourites allocated to them today, race wins went to Thomas Schmid, from Germany, defending champion, Vladimir Krutskikh, from Russia, and Phlippe Lobert, from France.

In the Green group, Laurent Hay, from France dominated the first race, had a problem finishing the second due to catching up the previous fleet and crossed second and then got a jury penalty at the start in the third, which left him mid fleet. Antonio Poncell, from Chile, won the second race and Fredrik Tegnhed, from Sweden, the final race.

So that’s a lot of racing in one day. Twelve starts, 11 winners, and only one man won two races, Doreste, who leads overall.

Four races are needed for a series, but after five races, then a medal race can be sailed on Friday.