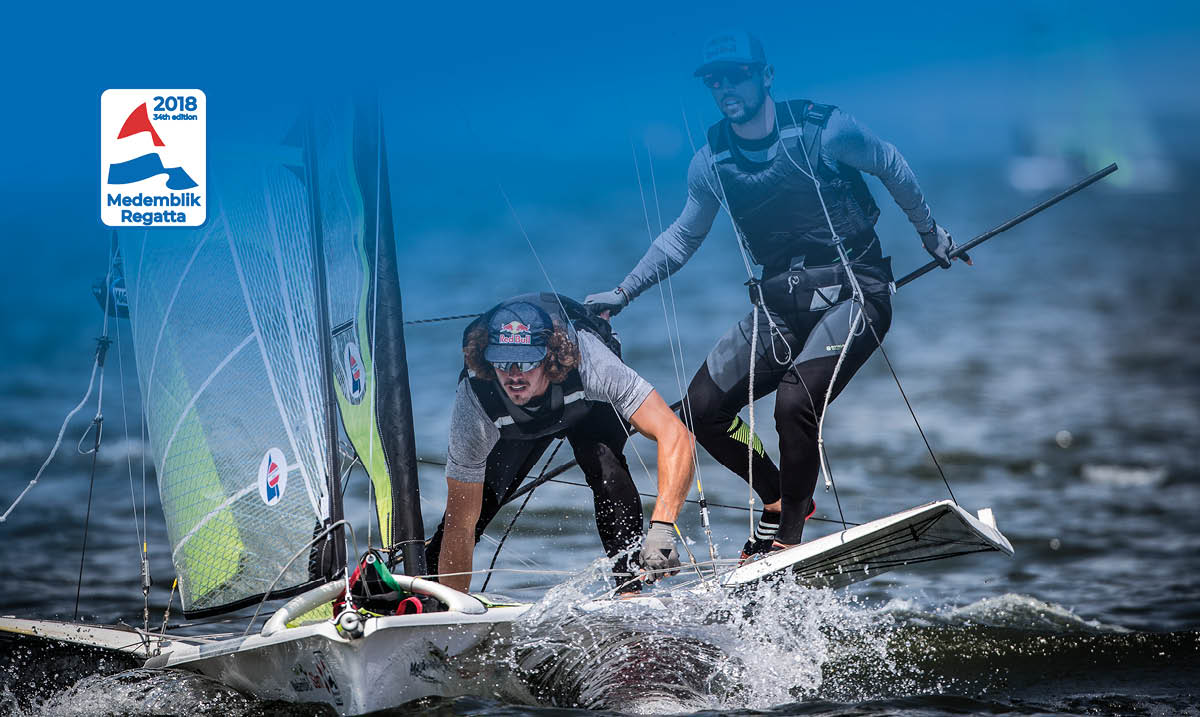 The second day at the Netherland's 34th Medemblik Regatta started with light winds. During the day the wind builds and gives the day a strong finish. This kind of weather is difficult for most sailors, but some know how to handle these conditions and took their advantage.

It's almost a copy of day one. With a morning filled with light winds, a little dip in the afternoon and then steady winds closing the day. All races have been sailed and competition is getting more and more exciting.

In the morning the weather looked perfect for racing today. The Laser sailors gathered at the Laser park to set up their boat and get out onto the water; leaving the harbor to get ready for the first start at 10 AM. But then the wind just dropped and races were postponed. Elliot Hanson: “Today was a reasonable day, lot of waiting around. The first race was tricky for me, we saw a wind range of 120 to 130 degrees, and wind going from 3 to 12 knots. But I still managed to finish somewhere in the top 10. Last race I finished 3rd, so that’s good.” And leading the fleet with 18 points, Etienne le Pen (FRA) is in second place with 31 points and Maxime Mazard (FRA) in third place (33 points).

In the morning Dutch Laser Radial sailor, Maxime Jonker, commented on the perfect conditions: “When the wind came in yesterday, the conditions were perfect. I think we have similar condition today, but hopefully the day is a bit shorter!” That shorter day didn’t work out as she had planned. Her teammate Daphne van der Vaart was happy with the conditions today. “I had a better day compared to yesterday. I don’t mind the light winds, gives me a chance to work on my personal goals. But it also makes a race more interesting. In the first race today everyone came together at the upper mark, there it gets exciting. Even when you’re a really fast sailor, you still have to work hard in such a close group.” Van der Vaart is leading the fleet now after two days, Croatian Elena Vorobeva is in second place and Polish Magdalena Kwasna is in third place.

The Polish Zofia Noceti Klepacka is leading the RS:X Women after the second day of racing with 18 points. Russian Stefania Elfutina comes in second with 23 points and Dutch Lilian de Geus is back in the top 3 after a difficult first day. The Polish Maja Dziarnowska started the day in the lead, but had a tough day. Here launches were good, but somehow she manages to finish somewhere outside the top 10. Dziarnowska stays positive, she still got 3 days of racing left.

In the RS:X Men two of the Dutch favorites are not in the place they would like to be. Kiran Badloe (in 6th place): “It was a tricky day, we've raced three races with light wind. Lot of pomping, overall I'm satisfied. Tomorrow the real racing starts!” Thursday more wind is predicted, those are the conditions Badloe is happy to race in. For his trainingspartner Dorian van Rijsselberghe it's more about getting into the rythm again: “I'm happy racing over here, it's going ok but we have difficult circumstances. But I've got my old feeling back on the board, that's a good thing!”

The youth windsurfers are having a strong competitor in Fabien Pianazza (FRA), who is winning almost every race. His fellow France sailor Tom Garandeau is in a strong second place, finishing almost every race behind Pianazza. Dutch Jim van Someren is in a third place after two days of racing.

The foiling Nacra 17 didn’t start before 3.30 PM, but when they finally started some good races have been sailed. Spanish Fernando Echavarri Erasun and Tara Pacheco van Rijnsoever are racing a steady Regatta so far. “We’re doing really well so far in these tricky conditions. And the rest of the week is going to be interesting with the different conditions predicted at the moment.” The Spanish duo is leading with only seven points after 6 races. New Zealand's Gemma Jones and Jason Saunders come in second place with 11 points, third place is for John Gimson and Anne Burnet (GBR).

“Today was OK for us, bit of a tricky day”, Charlotte Dobson from Great Britain is sailing the 49erFX with Saskia Tidey. “We didn’t really have a strategy for today, we just handled the situation as it was presented. I feel like we got through it quite OK, it could have turned out really differently!” Dobson and Tidey didn’t mind the many general recalls today. “We wanted to practice starting, so with all those general recalls today, we are really getting everything out of this event we want.”

Last class from the water was the 49er, they had to wait a while before their last race of the day could start. It didn’t seem to impress France Lucas Rual and Emile Amoros, finishing either in first or second place throughout the regatta so far. Yago and Klaus Lange (ARG) are in a steady second place and Danish Jonas Warrer with Jakob Precht in third.