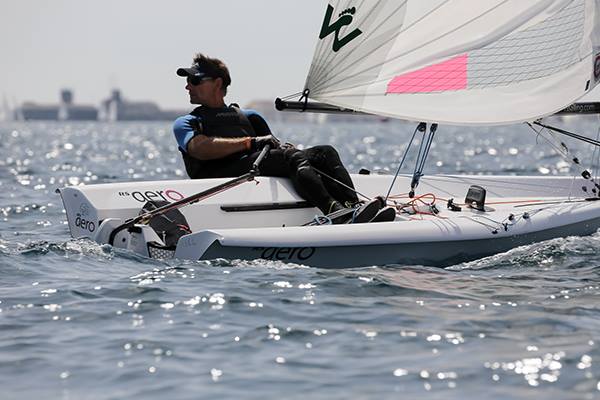 Yet another big day out on Weymouth and Portland Bay as we launched into a light northerly, and after one aborted race as the wind switched, we had three more races for the four flights (205 RS Aeros in all) in an increasing south-westerly peaking at over 20 knots.

RS Aero 9 – by Richard Watsham, GBR
A mixed day on the water, with changeable conditions, making for a great day of tactical sailing. Peter Barton stamped his mark on the RS Aero 9 event and did GBR proud by gaining three bullets, breaking Mark Jacobi’s (USA) clean sheet of firsts to that point.

The day started with a light to moderate north/north-easterly wind that built up to very fresh westerly by close of play. Keeping an eye on the clouds and taking the wind shifts was the only way to win on the beat, making for close quarters taking duels of the line in the first race.

As the wind increased into the second and third races, tired legs started to show, and those that had the fitness required to sustain the effort made big gains on the beat. In the final race there were a few wobbly moments on the downwind leg as the gusts and waves made for adrenalin fuelled action.

Ready for some more fast and furious Aero racing tomorrow!

RS Aero 7 – by John Wilcox, GBR
Today was the first day of the final series for the RS Aero 7 fleet. All competitors were in their final Gold and Silver fleets.

Winds started from a northerly direction, which made for a very shifty first beat, with left appearing to pay off early. However, after a 90 degree wind shift, the race was soon abandoned.

The now westerly wind was freshening quickly. The Silver fleet got away cleanly, and a handful of people in the Gold fleet black flagged with two general recalls.

Sailors able to deal with the chop were performing well upwind. There was some great surfing downwind, with some spectacular capsizes. The challenging conditions were starting to spread the fleet out significantly.

More General Recalls and Black Flags for both fleets in race two. Those in the Gold fleet were pushing the line hard on the third race of the day and more competitors were Black Flagged.

With the gusts now hitting Force 7, the fleet was enjoying some great planing conditions downwind, but some legs were starting to get tired upwind. The beers and pasta party for return of tallies was a welcome respite when everyone arrived back on shore.

RS Aero 5 – by Karlijn van den Boogaard, NED
Today started out with a race that got abandoned. So, we might have the smallest sails, but we also sailed the highest number of races. Also, that first race was my best race so far, so it will be a nice one to remember even if it does not count. That must really apply to Lucy Greenwood, who actually won it!

We realised today, that the RS Aero 5s got spoiled getting the first start every time. Although we had to wait a bit more, it was really nice to see the other rigs starting and watch the RS Aero 9s finishing on the planing reach!

The last race was shortened, so we got to finish on the top mark meaning we could sail straight home to the Harbour. It was still quite a long way, legs are tired, but we all survived!