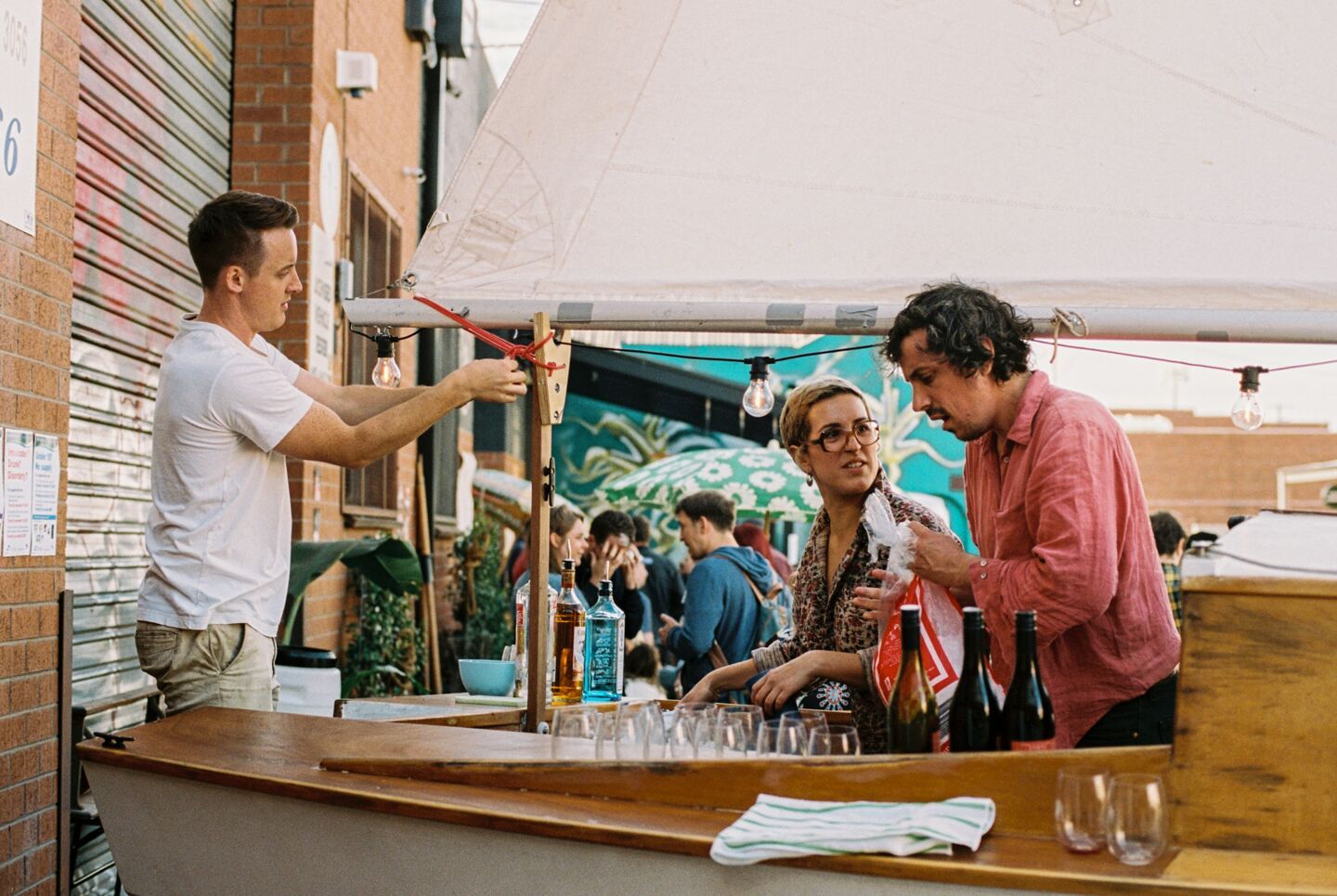 Bryn, Giselle and Ed aboard either / oar. Pic - Alan Weedon

Mel Farley introduces the 16ft drinks bar that reefs in a blow!

The Hartley 16 is an icon, widely recognised for its role in transforming sailing culture by making the pastime accessible to everyday Australian families.

The plywood trailer-sailer, designed by New Zealander Richard Hartley in 1959, was based on the lines of a small New Zealand fishing boat and could be built at home by aspiring sailors with basic carpentry skills. More than six thousand plans were sold globally.

The TS16, as it is commonly known, remains a popular choice amongst sailors today for its performance, affordability and simplicity of design. It’s a familiar sight on coastal and inland waterways around Australia.

Far less so in the Queen Victoria Gardens at the centre of Melbourne’s Southbank Arts Precinct, where sail number 699 temporarily took up residence last year as the primary player in an urban activation project known as either / oar.

699 has been remodelled as a mobile bar, which some sailors may argue is not a significant departure from a sailboat’s traditional use. Sailors are renowned for enjoying a tipple. As Francis Chichester famously declared, “Any damn fool can navigate the world sober. It takes a really good sailor to do it drunk.”

But either / oar is more than just a bar. Once again, the humble Hartley 16 has become a vehicle for societal change, with this particular boat encouraging communities to gather in disused spaces, reclaiming industrial and urban sites, while they contemplate the transition of place through time. Not unlike sailors discussing the vagaries of the wind over a drink in the yacht club bar at the end of a day on the water.

either / oar is the brainchild of urban planner, Bryn Davies’, who first had the idea of a pop-up bar housed in a timber sailboat while living in Berlin, working as a custom timber furniture maker using recycled wood.

“Berlin has many beautiful lakes within easy travelling distance of the city centre and the boats were cheap and plentiful,” Davies explains. “Berlin was also awash with vacant spaces, many of which had a rich story to tell of the city’s colourful past.

“I nearly bought a boat while I was there, but bureaucracy and logistics made it difficult, so the concept was put on ice.”

Davies’ fascination with nautical memorabilia continued once he returned home to Melbourne. It was while buying a pair of wooden oars from a Gumtree seller that he was introduced to the Hartley 16 and realised it was the perfect boat for his passion project. Now he just had to find one.

Like many would-be buyers searching for that elusive first boat, Bryn found that over the next few months he was either beaten to the sale or boats were priced out of his reach. Recognising the popularity of the TS16 on Melbourne’s Port Philip Bay, he wrote to the commodore of every bayside yacht club, describing his vision and asking if they knew of a Hartley 16 for sale. Which is how he was eventually introduced to Hartley sailors, Charlie and Gillian Horvath.

Multiple generations of the Horvath family have sailed TS16s. The family cruised and raced together, accumulating boats as the years went by. Captivated by Bryn’s vision and enthusiasm, they were delighted for sail number 699 to be repurposed by Bryn for new voyages of a very different kind.

Much of 699 remains unchanged, with one notable exception; the cockpit floor has been removed to accommodate the bartender behind the ‘bar’ – the port side cockpit seat – newly topped with a gleaming timber veneer that was the original sole. Bryn hopes to eventually install brass taps on the gunnels, with the lines leading back to kegs discreetly housed in the cabin.

While the conversion from boat to bar is Bryn’s handiwork, the extension of the project to include urban activation events is a three-way collaboration with project partners, Giselle Diego and Ed Service. The trio combine their experience to stage activation events in disused buildings and spaces, encouraging communities to think differently about the way they interact with a place.

But while her future journeys will be land based, either / oar’s rigging and sail plan remain a key component of her suitability for use in crowded urban areas. The team was compelled to document a risk management plan for the Queen Victoria Gardens that addressed the boat’s stability in the event of wind gusts. A quick call to Charlie Horvath and the problem was solved. either / oar is the only bar in Melbourne to rely on ‘reefing to reduce sail area’ to manage the impact of strong winds.

With sails hoisted and fairy lights entwined through her rigging, either / oar is a stunning sight against the city skyline.

With Covid-19 restrictions easing, 699 and the urban activation project can once again set sail, transporting more communities across the oceans of space and time to visit the future possibilities of urban and regional land use – and introducing a new generation of potential sailors to the beloved Hartley 16.

About the author: Freelance writer Mel Farley is an avid boatie, based on the Gippsland Lakes in Victoria, Australia. Her uncle built a Hartley 16 in the backyard in the late 1970s and introduced Mel to ‘stick and hanky’ boating.