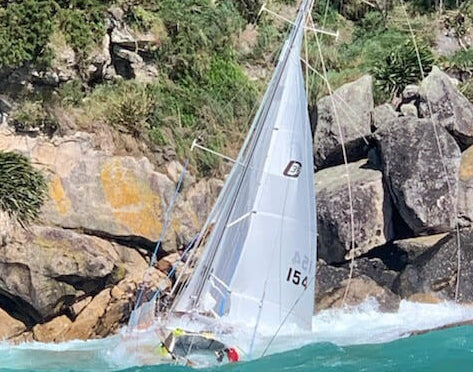 Michael Davey, from Adelaide, will no longer be able to participate in the race starting in France in September 2022. Pic - Michael Davey

Australian sailor Michael Davey has been forced to withdraw from the 2022 Golden Globe Race after his yacht was washed onto the cliffs in Tasman Bay. In a Facebook post, the sailor recapped the unfortunate event.

After having completed a solo, non-stop circumnavigation of the North Island of New Zealand, as part of her extended sea trials and as her qualifying sail for the Golden Globe Race, it is with immense sadness that I advise The Dreamcatcher was driven onto the cliffs in Tasman Bay just before midnight, last Monday, during a gale.

Initial hopes of possible salvage were quickly dispelled as the pounding by high seas over the next 48 hours shattered her to pieces.

I count myself particularly fortunate to have escaped physically unharmed. This was in large part due to the professionalism and dedication of the heli-rescue team and the coast guard men and women who were prepared to consider a sea-based rescue, despite the treacherous conditions, should the aerial evacuation from the cliffs prove impossible.

With great regret, therefore, I must withdraw as an entrant to the 2022 Golden Globe Race. With a broken heart I grieve the loss of a beautiful boat … and with her a dream.