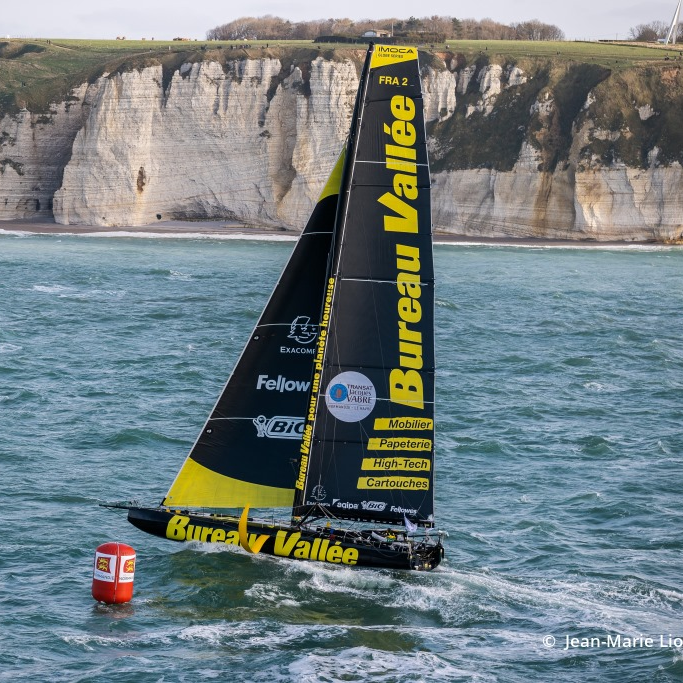 Bureau Vallée has withdrawn from the race after it was dismasted. Pic - Jean-Marie Liot / Alea

They are the first boat forced to abandon this 15th edition of the Transat Jacques Vabre race following a dramatic dismasting just 10 hours from the start in Le Havre, France.

The pair spent a difficult night securing and recovering sails, cables and mast parts in tricky tidal conditions. Burton explains what happened, “We had just passed the Raz Blanchard, we were arriving north of the island of Guernsey. What was surprising was that despite the spring tides, the sea wasn’t too bad. There were 15 knots of wind.

“We heard a big noise half an hour before we dismasted. We wondered if we had hit something. We checked everything including the stacks but nothing had moved. We were under full mainsail with a headsail.

Our speed was 18-19 knots when it broke. I was in the cockpit trimming, Davy was sailing. The first sound was like an explosion, the mast didn’t fall down, it imploded. Then there was a cracking sound and we heard a crash on the deck. Then we realised that the mast had fallen down.”

There were problems also for Equipe Voile Parkinson in the Class 40 fleet. An issue with the bowsprit forced the French pair of Florian Gueguen and Raphael Auffret to stop in Cherbourg for repairs. Tonight, they have almost caught up and are just 20 nautical miles from the rear of the fleet.

After a lively start on Saturday afternoon, conditions in the English channel have since proved very tricky, with light winds and strong spring tides. However, the Ultimes have now started the run south across the Bay of Biscay with little to separate them. Banque Populaire is nudging ahead but Sodebo and Actual are side by side and only a whisker’s length behind.

The Ocean Fifty multihulls are right on the stern of the Ultimes with Koesio and Primonial seemingly inseparable, for now.

Charlie Dalin and Paul Meilhat on Apivia, winner of the last edition, are already well ahead of the other IMOCAs. The French pair entered the Bay of Biscay in the early evening almost 40 miles ahead of second placed Fortinet-Best Western sailed by Romain Attanasio and Sébastien Marsset.

Meanwhile still battling currents and light winds in the English channel are the Class 40. Winner in 2019, Ian Lipinski on Crédit Mutuel is chasing down the leader Project Rescue Ocean which only has a 4 mile lead.