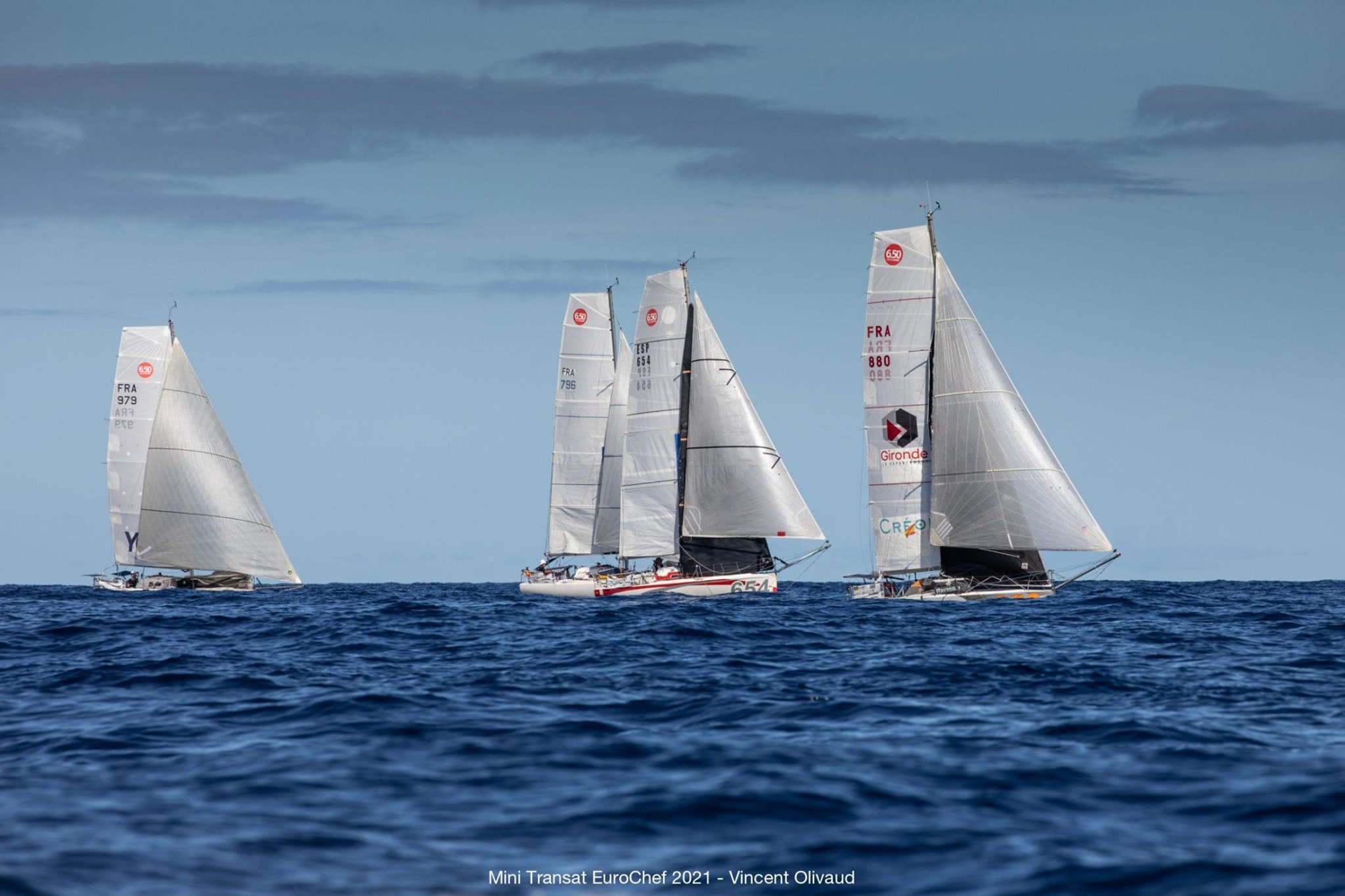 The trade winds have arrived for the Mini Transat fleet. Pic - Vincent Olivaud

As the leaders of the 23rd Mini Transat EuroChef fleet pass the ‘1,000-miles to go’ mark in their race to Saint-Francois, the trade winds is finally making its presence felt out on the racetrack.

The latter remains fairly wheezy at less than 20 knots, but it’s beginning to become more uniform from north to south. What this means is that from tomorrow all the 84 competitors still competing in the event will benefit from pretty much the same breeze. Within this context, those who have banked on a southerly option will be able to reap the benefits of their positioning over the next 24 hours. After that, they will have virtually zero advantage in terms of pressure.

Though those in the south have clearly had the advantage over recent days in terms of wind strength, things are about to change out on the racecourse. Indeed, the trade winds is slowly but sure re-establishing itself. It still remains a little lazy, generating between 13 and 18 knots depending on the time of the day, it’s gradually becoming more balanced in the corridor where the solo sailors are making headway.

Ultimately, from tomorrow all the skippers, whether they’re located to the south or 500 miles further north, will then benefit from the same wind strength. As such, the differences in speeds should be much more uniform.

Needless to say that those who have opted for a more direct trajectory, especially Antoine Bos 825 – Rhino), Victor Eonnet (525 – Fondation Arthristis – Amiens Naturellement), Anne-Gaël Gourdin (626 – Cassini) and Pierre Meilhat 485 – Le Goût de la Vie), will be delighted to be able to power along again at double-figure speeds.

In contrast, those who have invested heavily in the south will see their separation become less and less advantageous. For them, the challenge over the next 24 hours will clearly be to claw back as many miles as possible in between times, before they lose their edge.

Inevitably, this fact has not escaped Pierre Le Roy (1019 – TeamWork), leader in the prototype category for the past two days. He is currently sailing with his pedal to the metal and boasting an average speed in excess of 12 knots, whilst the majority of his rivals, with the exception of Fabio Muzzolini (945 – Tartine sans Beurre), are making between 6 and 8 knots.

It’s a pretty similar scenario for Hugo Dhallenne (979 – YC Saint Lunaire) in the production boat category. Currently second in the overall ranking after the first leg, he too has put all his chips on the southerly option, particularly so yesterday. He’s now making headway at the same latitude as Lille and he too is making the most of the added bonus he has in terms of breeze right now over his playmates, the closest of whom are 60 miles further north.

Those in the fleet who are furthest ahead, will still have a slight edge over the others, and this is set to be the case right the way to the finish. A finish which, according to the latest routing, is shaping up to be Friday 12 November for the first prototypes and overnight on 13through into 14 November for the leaders in the production boat category.

Of note elsewhere on the racetrack: the Spanish sailor Marc Claramunt (657 – Abicena) is dealing with an issue with his autopilot ram, but is hanging on in there.