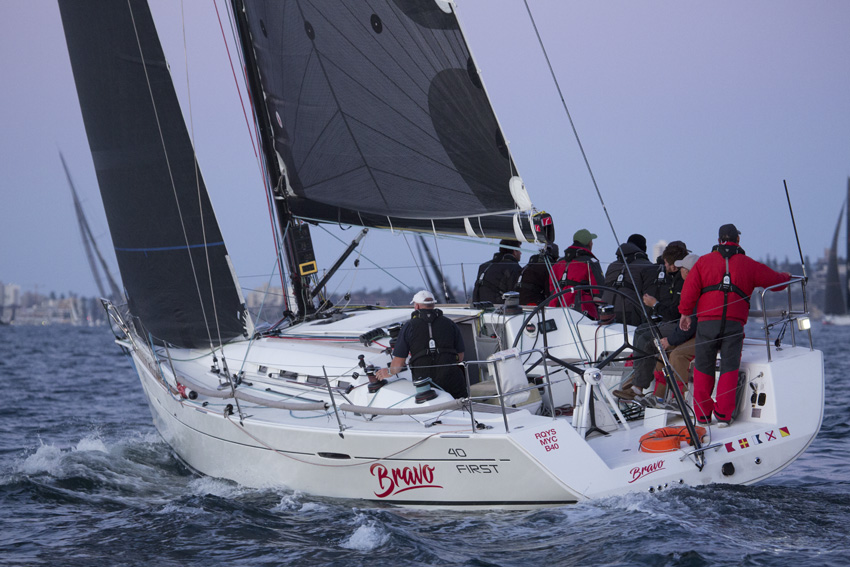 Queenslander Robbo Robertson enjoyed a race-long battle with two other Beneteaus to take out the Cabbage Tree Island Race, his Beneteau 40, Bravo staving off challenges from the Black Sheep and Ariel, to claim Race 4 of the Cruising Yacht Club of Australia’s Blue Water Pointscore (BWPS)

The trio stayed in touch throughout the race, according to Bravo’s navigator, Carl Crafoord. With the handicaps applied, Bravo beat Derek and Martin Sheppard’s B45, Black Sheep and Ron Forster and Phil Damp’s B40, Ariel by 25 minutes plus. The ORCi result mirrored that of the IRC result.

“It was a lovely race,” Crafoord said, as Robertson was unavailable for comment. “We started well and beat all the way up to the Island in a patchy breeze. We wanted to win our division, so stayed in touch with Ariel and Black Sheep, holding our time on them.”

Bravo was almost to the Island when a wind change from the north-east to the south-west arrived. She ran the rest of the way to Cabbage Tree Island under spinnaker and then went wide. At one point the crew thought they were on their way to Lord Howe and then Noumea, before the decision was made to tack.

“We had gone out on the shift and the current – like my dad taught me,” Crafoord said of his father the Late Max Crafoord, a veteran of 30 Sydney Hobarts and countless other offshore races.

“We lifted on port tack and only tacked once coming back to Sydney,” Crafoord recalled. The pressure was on to stay ahead of particularly Black Sheep, which has been at the top of her game, winning Race 3 of the series, the Newcastle Bass Island Race in October.

“We watched the fleet on AIS (marine traffic) – it’s like a big chess board and you have to keep your leverage – and we did that,” said Crafoord who went on to praise Robertson and crew member Hugh Brodie, who, he said, “made a significant contribution to our win.

“And Robbo, he’s from the old school – he could teach a few people. He organises the boat and crew, he runs the boat, he navigates; he cooks and cleans. He knows where everything is on that boat. And he listens to the crew,” said Crafoord, who made sails for the Queenslander 40 years ago. The friendship remains.

Derek Sheppard, skipper of Black Sheep, said: “From our perspective, in the bigger fleet, it’s hard to get clear air until you’re out of the Heads. Once we did, it was a great mix of conditions. Bravo – they sailed a very good race – made no mistakes. We did everything we could to get ahead of them, but couldn’t.”

Principal Race Officer, Denis Thompson, said he got the fleet away on time, “In a 12-15 knot north-easterly. They were nicely spread along the line and Maserati got a great start at the pin end.”

Race 5 of the BWPS is the Bird Island Race on Saturday, December 3, starting at 10am.