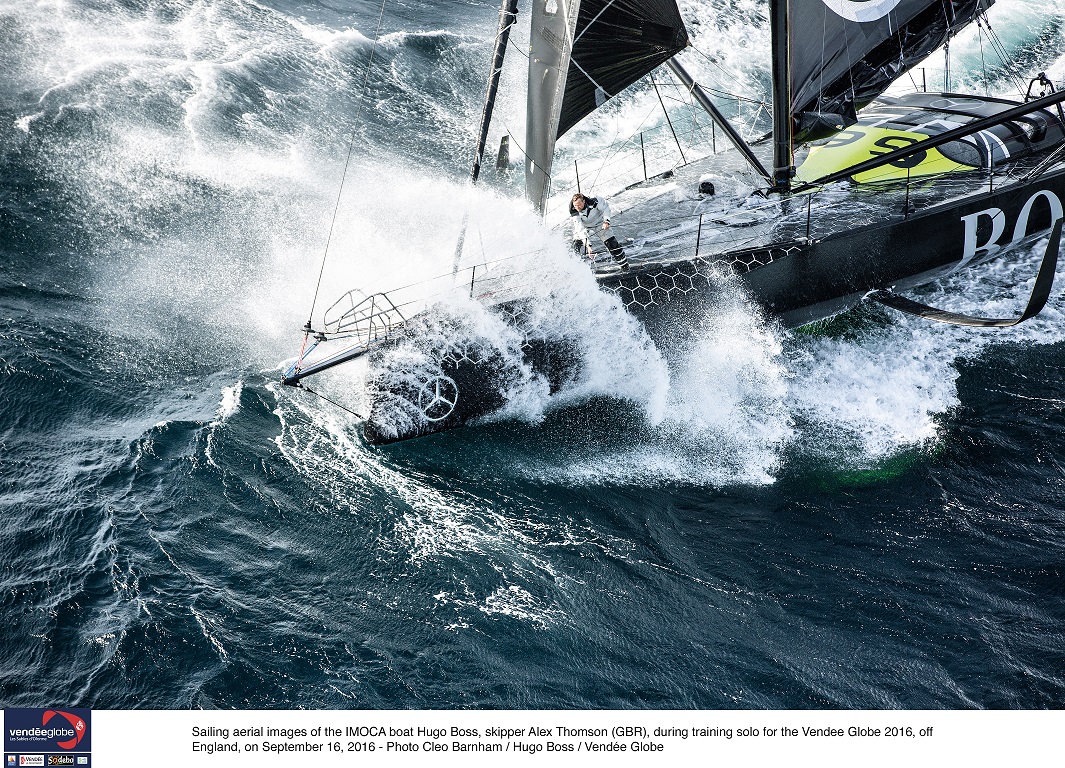 British sailor Alex Thomson was forced to slow his 60ft foiling yacht today after hit a submerged object in the South Atlantic. One of the boat's two foils, which help lift it out of the water to give it more speed, was damaged in the collision with the unidentified object floating beneath the surface.

Thomson was sailing at 24 knots in 22 knots of wind at the head of the Vendee Globe fleet, a position he has occupied for a week, at 0935 UTC when he heard a bang and his boat Hugo Boss changed direction. Thomson, who had been down below trying to sleep at the time, went up on deck and turned the boat downwind so he could inspect it. He found the starboard foil to be damaged and also noticed scrapes down the starboard side of the hull. Until the collision Thomson had been on course to set a new 24-hour solo distance world record, and in the 24 hours prior to the 1100 UTC position update had notched up 531 miles.

Thomson has now retracted the damaged foil and slowed his boat. He said there does not appear to be any structural damage but he will further inspect the boat when the weather conditions allow. “Having had a pretty quick night where the boat was sailing high averages and the boat was super uncomfortable I had retracted the foil 30 per cent early this morning and was sailing the boat pretty conservatively in a building breeze,” Thomson said this evening. “At 09.35 UTC this morning I was down below trying to sleep and the boat was sailing in 22kts of wind with a J2 and one reef in the main. I was averaging 24kts of boat speed when I heard an almighty bang and the boat stopped and turned to starboard by about 20 degrees. I quickly went on deck, eased the main sheet and realised I must have hit something. I eased the boat down wind and went to take a look and the starboard foil has been damaged and there are some scrapes on the starboard side of the boat. Right now I have taken the foot completely off the throttle and changed sails and retracted the foil and will sail on in these conditions until the wind and sea state moderate and I can inspect the damage and assess. I didn't see anything in the water but it felt like the boat wrapped itself around something and it has caused some pretty significant damage to my foil. I was instructed to carry out an internal inspection of the boat and there does not appear to be any structural damage to the hull that I can see. For now I am going to continue and assess when I get the chance.”

Ross Daniel, technical director of Alex Thomson Racing, added: “We spend years pre-Vendee Globe trying to mitigate risk but hitting something in the water is something you have absolutely no control over – it's very frustrating. We always knew that there was a risk that a foil could hit something so we took it into account with the design of the boat. It can sail with or without the foil, so it's not the end of the world, but obviously one tack will now be faster than the other. Alex is going to have to change the way he sails depending on what tack he is on. At the moment there is just the stump of the foil left so Alex will remove that once the weather allows and he will be back up to speed again. Luckily for us the majority of port sailing in this race is down to Cape Town and thereafter there's a lot of starboard. If we were mid-fleet it would be a different story but we've got a nice gap at the front.”

It might be fast and furious at the front but life in the peloton is about to get worse. A second centre to the notorious St Helena High is developing right in the path of the group led by Yann Eliès, who now lies some 624nm adrift of Thomson in eighth. The door that welcomed the race leaders through is about to slam shut, trapping the chasing pack in light winds and rendering them powerless to stop the gap growing further.

Meanwhile veteran skipper Bertrand de Broc this afternoon took shelter in the lee of Fernando de Noronha, a South Atlantic island chain off the coast of Brazil, to inspect damage caused when he hit an object off the coast of Portugal. De Broc dived underneath MACSF and was able to see some damage but couldn't establish what it was before he was forced to board his drifting boat. It is thought he will anchor to allow him to dive for longer.

Meanwhile Dutch competitor Pieter Hereema was relishing the 'champagne sailing' on offer in the south easterly trade winds. Despite being in 24th place, the 65-year-old was high in spirits as he forged a path south on No Way Back. “It's fine, beautiful weather – beautiful sailing conditions,” he said. “It's a shame it's all upwind but that's what it is in this part when you want to go south. I'm enjoying it very much and I hope in a few days to be able to crack the sheets and have a little bit of an easier angle to sail. This part here is not what the Vendee Globe is famous for – this is champagne sailing. The race is not only about big waves, freezing cold and 45 knots of wind. It's a long race and there are many more weeks to come that will be more difficult and more uncomfortable.”