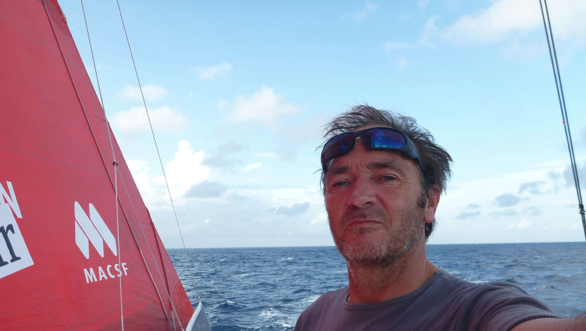 Following on from the collision that his boat experienced early in the race off Portugal, and after sailing to the island of Fernando de Noronha and diving twice to inspect what was happening under his hull, Bertrand de Broc, skipper of the monohull MACSF, after consulting with Marc Guillemot his Team Manager, has taken the decision this evening to retire from the race.

Bertrand de Broc decided yesterday evening to head for the island of Fernando de Noronha to inspect the hull of his boat. After consulting his architect, Bertrand has been forced to retire from his fourth Vendée Globe. A large part of the hull has in fact been damaged, making it impossible to continue in the race. The deafening noise that is coming from the damaged hull is very handicapping for the skipper, even if he was wearing noise-cancelling headphones. This was a very difficult decision for the successful skipper and his team, who have done their utmost to enable him to continue this solo race around the world. Tackling the Southern Ocean in these conditions, Bertrand knew would be extremely risky. It was therefore the wise thing to do, even if he is very disappointed.

Bertrand de Broc : “Having to take this decision is very hard to bear. It is bound to happen some time in a skipper's career, but it doesn't make it any easier to bear. I'm disappointed. But it would not be reasonable to face the Southern Ocean in this state,”.

Doctor Philippe Eveilleau, President of the MACSF Group accepts this difficult decision and wanted to offer his full support to the skipper of the boat sponsored by health professionals. “Bertrand de Broc is living up to his legend and has attempted everything to continue. Even if he hasn't completed the voyage, this has been an extraordinary adventure and we would like to congratulate him on his courage and perseverance. On behalf of everyone at the MACSF, we thank you for taking us aboard for this story with the Vendée Globe.”

Following a collision off the coast of Portugal, vibrations aboard the MACSF monohull have led to an unbearable noise.

For several days, Bertrand de Broc has heard a deafening noise. The cause of this was a knock off Portugal. As such bangs are very common in a race, Bertrand de Broc did not really worry about it initially. But the noise has grown and has become unbearable, when the boat goes above 14 knots.

Bertrand de Broc has therefore taken the decision this evening to change course and head for Fernando de Noronha to check out what is happening on the boat and try to understand what is causing the noise. Several ideas are being explored by Marc Guillemot, the team Manager for MACSF, to identify the cause. A thorough check will be required, in particular of the hull, keel and rudders. To do that, Bertrand plans to anchor leeward of Fernando de Noronha, to be able to dive to inspect the boat.

Bernard de Broc: “Aboard an IMOCA, there is always a lot of noise and that is part of our every day life. There are the noises we know, which are reassuring and those which are an alert. I don't wear noise-reducing headphones when I'm sailing, as I want to hear the noises and recognise them. In the long term, when there is a problem, it can become unbearable.”

Bertrand, currently 14th in the rankings, is still in the race.