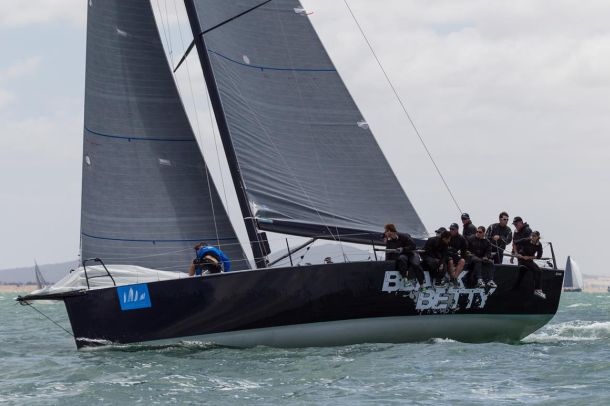 Royal Freshwater Bay Yacht Club in Perth is pleased to be hosting another showcase of sailing on the Swan River. A selection of WA’s IRC Big Boats will be joined by a fleet of four M32’s for stadium style racing right in front of the club. Spectators will enjoy watching the racing from the picturesque grounds which look over the natural arena of Freshwater Bay.

The four M32’s will be raced by local sailors who were invited to enter the event. Each skipper will bring two of his own crew along and they will be joined by two licensed sailors who will assist them to race the M32. Licensed sailors come from the experienced teams, Sam Gilmour’s Neptune Racing and Matt Jerwood’s Redline Racing.

Race one and two will be an exciting show of high speed M32 racing with Neptune Racing v’s Redline Racing with one of the entered skippers on each boat in the hot seat position.

Skippers Ian Clyne, Darryl Dedman, Alistair Murchison and Ian Jenkins will race the following series of races in their teams. The four are from diverse sailing backgrounds, Ian Jenkins has catamaran experience, Alistair is an Etchells sailor, Darryl has a skiff background and Ian Clyne races his J122 offshore as well as river racing on a Foundation 36.

The IRC Big Boat fleet is sure to put on a picturesque display too. Yachts include Gary McNally’s GP 42 Black Betty who is well known locally for her speed on the river and success offshore. Dave Walling’s Farr 40 The Next Factor is the current WA IRC State Champion and for the third year running while Peter Chappell’s 32’ lightweight racer The Cadillac always looks spectacular.

With 15 knots of steady southerly breeze forecast it’s looking like an exciting evening on the water.

Skip Lissiman from Aston Harald Sports comments: “At M32 Australia we are pleased to give local Perth sailors an opportunity to sail on the M32 Catamarans and hopefully expand the M32 Owner Driver racing class in to Australia. Perfect sailing conditions are forecast for the event so we will get to see how exciting the M32 catamarans are to sail on as well as thrilling to watch for the spectators on the shoreline.”

There will be loads of entertainment for spectators ashore at the RFBYC event with live video streaming to big screens thanks to broadcast partner Front Row Screens, an M32 interactive area and expert race commentary with Ed Fethers and Dave Gilmour. Ed is known for his radio show Let’s Go Sailing on 91.3FM and Dave is an experienced young sailor in match racing and racing the 49er class, he is sure to entertain the crowd.

To kick off the broadcast, Front Row Screens will display a live video feed from on-board RFBYC offshore racing team M3. Peter Hickson’s TP 52 will be racing in the CYCA Cabbage Tree Island Race in NSW. The crew will stream a live video of the race start which is scheduled for 19:00 Sydney time.

If you can’t get to Royal Freshwater Bay Yacht Club to watch the action, tune in to watch the event live on YouTube using this link – M32 & IRC Big Boat Arena Racing at RFBYC or online with www.boatson.tv