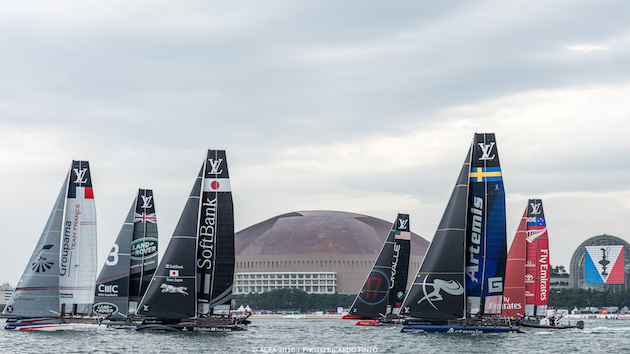 The stage is set for the final weekend of racing in the Louis Vuitton America's Cup World Series.

The ultimate event is taking place in Fukuoka, Japan this weekend, the first America's Cup racing in Asia, and showcase event for SoftBank Team Japan, the first Japanese Cup challenger in 15 years.

Land Rover BAR has a 14 point lead over ORACLE TEAM USA going into the final races in the two-year series.

But with 90 points on offer over the six races scheduled on Saturday and Sunday, the fight for the title is still open.

“It is very close in terms of the overall points. We have a bit of a gap to the other two boats, but in reality we’re going to have to sail really well this weekend if we want to end up on top in the Louis Vuitton America’s Cup World Series,” said Ben Ainslie. “We have to do the absolute best we can.”

While second placed ORACLE TEAM USA has their sights set on the top of the leaderboard, the team could be forgiven for looking over its shoulder at Emirates Team New Zealand, who are just three points back. But skipper Jimmy Spithill says the focus is on taking a win.

“We never think about looking after second place,” Spithill said. “We are here for the win. No question, it’s Ben’s to lose but stranger things have happened. We'll be giving everything we can to try and reach the top.”

The spotlight this weekend won't only be on the leaderboard. For SoftBank Team Japan, this weekend marks an opportunity to bring America's Cup racing to Asia and Japan for the very first time.

SoftBank Team Japan sailor and general manager Kazuhiko Sofuku sailed with previous Japanese challenges, but this is the first time he's been able to race in his homeland.

“I’m very excited to be here and already I feel like this is going to be a really big event,” he says. “There is so much enthusiasm from the media and the fans and I know ticket sales have gone very well. I am looking forward to seeing everybody who is going to come out to see us this weekend.

“For us as a team this could be the perfect way to keep building up our performance. We were third in Chicago and Portsmouth, then second in Toulon and we keep improving so as long as we do that the results will follow.”

On Friday, the teams took to the water for Official Practice racing, with SoftBank Team Japan taking a popular first race win.

Four races were completed in light to moderate conditions. The final race of the day was the designated substitute race, which may be scored over the weekend should conditions not be suitable for racing. Series leader Land Rover BAR took the win, with ORACLE TEAM USA in second place.

Six races are scheduled over the next two days – three on Saturday, and three more worth double points on Super Sunday.