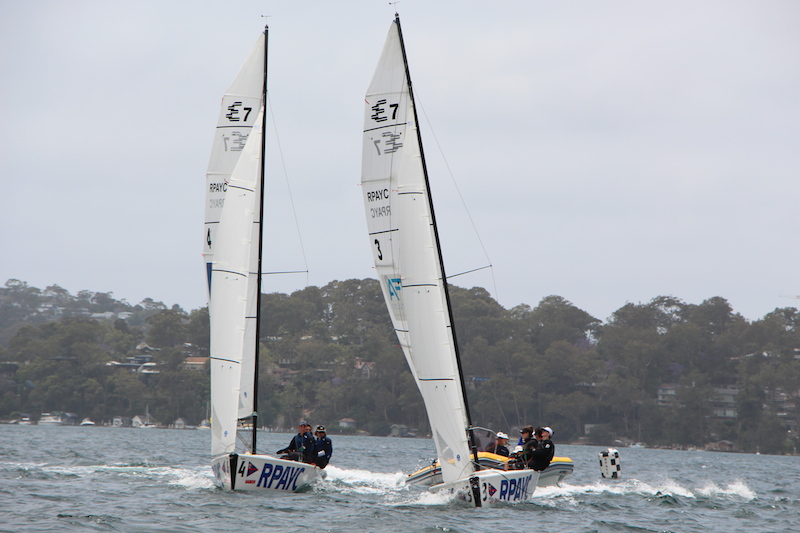 Will Boulden and his Alpha Racing Team from Perth took out first place in the round robin and elected to compete against Jelmer Van Beek from the Netherlands. Boulden continued his strong performance to secure a place in the semi-finals after convincingly winning three from three races.

Second ranked team into the Quarter Finals was Royal Prince Alfred Yacht Club’s Malcolm Parker who chose to sail against Oakley Marsh from Wellington. Parker dropped one of four matches after trawling his kite but finished the day with a convincing lead on Marsh to take out the second place in the semi-finals.

Sarah Parker and her all female team from Pittwater were chosen by Will Eastman from Wellington, New Zealand. The girl’s local knowledge and clean crew work helped them to win three from three close races and take out a spot in the top four. Race two between the teams had Sarah Parker leading off the line with a penalty and clearing it on the final leg of the race. In the final match between the pair Sarah lead around the track and in a nail biting finish crossed just second ahead of Eastman on the line.

George Anyon and Matthew Hughes were left to fight for the last place in the semi-finals in a ‘Mate V Mate’ sail off that went to five races. The training partners from Auckland harbour left it all on the track with Hughes eventually taking out the final top four spot.

Places 9th – 12th duelled in a sudden death format to determine their final placings in the dying afternoon breeze.

Late in the afternoon Match 1 of the Semi Finals was undertaken with Will Boulden electing to compete against Sarah Parker in their Semi Final leaving Malcolm Parker to race Matthew Hughes. The first to score 3 points will progress to the final.