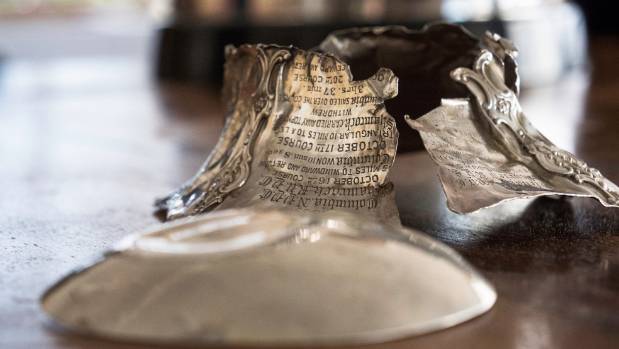 The two pieces of the original America's Cup that were damaged and replaced after the 1997 hammer attack in Auckland have been reunited with the Auld Mug in New Zealand. Photo Emirates Team New Zealand.

They are like classic pieces of silver right out of a sailor's treasure tale and they're finally back in the hands of Team New Zealand.

The two chunks of buckled silver are leftovers from the three-month repair work done by London jewellers Garrard & Co after the America's Cup was damaged in a hammer attack by protester Benjamin Nathan at the Royal New Zealand Yacht Squadron in 1997.

They've led a dangerous life, turning up on a website auction in the wake of that repair, only to be saved by Swiss syndicate Alinghi who had won the Auld Mug off Team New Zealand in 2003.

When courts got involved in the litigious 2010 deed of gift challenge between Alinghi and Oracle Team USA, won by the Americans, the silver pieces were officially listed as still being part of the America's Cup in a court ruling.

Yet when Emirates Team New Zealand won the Cup back from Oracle Team USA in Bermuda last year, they didn't come with the handover of the imposing trophy.

Team New Zealand's rules and legal adviser Russell Green noticed the shortfall when he read through the court ruling from the Alinghi-Oracle spat and asked Cup authorities where they were.

Initially, the dwindling America's Cup Authority for the Bermuda regatta pleaded ignorance but said it would look into it.