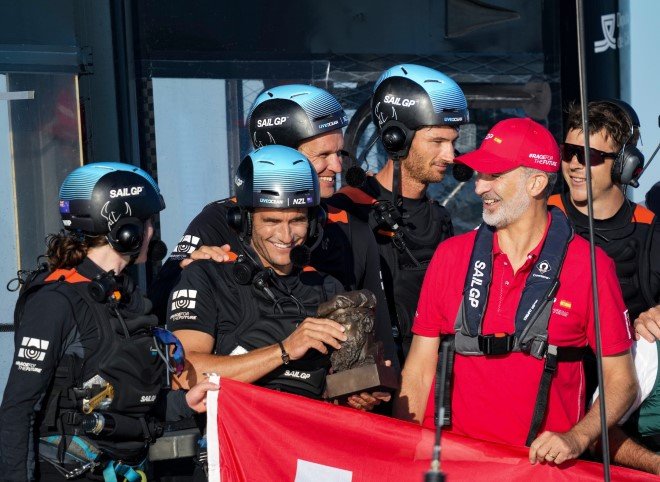 The Spaniards are looking to win on home waters - SailGP pic

Spain: With the stage set for the first ever Spain Sail Grand Prix, the port city of Cádiz is buzzing with excitement as the home team sets its sights on finishing on top of the podium.

Upping the ante for the sixth event of the season, the weekend will also see – for the first time – the Women’s Pathway Program (WPP) athletes make their racing debut.

Ahead of a weekend filled with high-octane racing, a one-off commemorative race took place to mark the 500th anniversary of the first circumnavigation of the globe involving Phil Robertson’s Spanish team, Peter Burling’s New Zealand team and U.S team driven by Jimmy Spithill.

After a close fought battle, it was Burling that came out on top to take the Sebastian de Elcano Trophy and have the honor of being presented it onboard the Kiwi F50 by His Majesty King Felipe VI.

Burling said: It was great for us as a team to win our first race. It felt like it was a tricky practice day before that, but it was just great to put together a good last race when it counted. It gives us a good boost going into tomorrow and we are really looking forward to going racing.”

Ahead of the trophy race, all eight teams took part in three practice races. It was the first chance to get a glimpse of the roles that the Women’s Pathway Program athletes would take. With a four-crew configuration for the first practice race – and the second outing of the 29-metre wing – each team took the unanimous decision that the additional crew member would contribute to the power in the grinding position.

The pressure is mounting for the home team who are desperate to win their first event. Added pressure came at the official press conference when Ben Ainslie (GBR), Nathan Outteridge (JPN) and Rome Kirby (USA) placed them as the favourite team and the one to watch.

Spain SailGP Team wing trimmer, Florian Trittel, said: “We’ve been working on so many things, as obviously we want to improve every day. Getting time on the F50s is very precious and very difficult, but we’ve got a lot of time these past few days.

“We have changed things in the playbook, and we are feeling confident. We just want to keep working the same way we have been so far and put on a great performance for the home crowds.

“It’s definitely been amazing how we have been received here in Cádiz. Conditions have been glamorous. We’ve been here from Monday training and it’s been a very productive week for the Spanish team. We are just looking forward to the weekend and looking forward to some action and hopefully a great result.”

With wind conditions in Càdiz forecasted to shift over the next two days, tactics used in previous light wind conditions by the dubbed ‘wind whisperer’ may need to be adjusted.

Outteridge said: “It’s really good to be here in Cádiz. Yesterday we had really tricky conditions, and it looks like the forecast for today and tomorrow are tricky, and Sunday looks quite windy. We’ve created a bit of a habit on our team for performing well in these light and shifty races, so we are crossing our fingers for a bit of that this weekend.”

After a crushing start to the season in Bermuda, the U.S. team has steadily gained throughout the season with a consistent showing on the top half of championship leaderboard.

U.S. SailGP Team flight controller Rome Kirby said: “We definitely had a tough start to the season in Bermuda, getting tangled with Japan, and we’ve had our fair share of tough breaks. But we focussed on the process and are just building on this. Whether it is a breezy venue or a light-air venue, we work on that process with the goal just to be in the Grand Final in San Francisco and win that.”

The series would not be complete without drama, and Saint-Tropez was no exception. A mistimed manoeuvre by Ainslie’s British team ended in a regretful swipe of the Spanish boat while attempting to squeeze through a narrow gap. The damage was seemingly minor, but on further inspection it proved costly, resulting in penalty points for the British team and extensive repairs for Spain.

Ainslie said: “Look, it was my mistake. In terms of the decision we made of going for the gap – it was there at the time we went for it, – by the time we got there it wasn’t, obviously. It’s one of those moments you have to put your hands up, take it on the chin, and analyze to try and do it better and avoid those situations later down the line.

“None of us want to have collisions, and we get pretty heavily penalised for it – to the extent that we probably would have been better not turning up at all in Saint-Tropez. But those are the rules and that is exactly how it should be in terms of protecting the assets of these boats; they are expensive bits of kit and we want to avoid them coming together.”

Rounding out the bottom half of the leaderboard is the New Zealand team in sixth, and Nicolai Sehested’s Denmark SailGP Team presented by Rockwool in seventh. Quentin Delapierre’s France SailGP Team inherits eighth position as he makes his debut at the Spain Sail Grand Prix following the departure of Billy Besson.

New driver Delapierre said: “I’m not here to revolutionize the French team, I’m just here to learn as quickly as possible and get into it. I think this first week we just have to feel confident with my boat handling and steering style. I hope for Sydney we will be able to just race at a good level and have fun.

“At this time, I want to build a solid team with a solid partnership with Bruno (Dubois, team manager), and I think on the sailing part we need to work with the entire team and look at the data and see if we can improve and be confident on the racecourse.”

Action-packed racing awaits fans in the Bay of Cádiz, beginning on Saturday, October 9. The Spain Sail Grand Prix comprises five fleet races and a final podium race where the top three boats will battle it out on the water to decide the event winner on Sunday, October 10.

The boating community is invited to take their vessels out to watch the high-speed F50 racing and can register via SailGP’s Bring Your Own Boat Program. Once registered, boaters will receive all of the racecourse information and a VHF channel to listen to for all the latest updates.

For those unable to attend in person, the action can be watched via the broadcast across 175 territories, including live via RTVE in Spain. Full details can be found at: SailGP.com/Watch