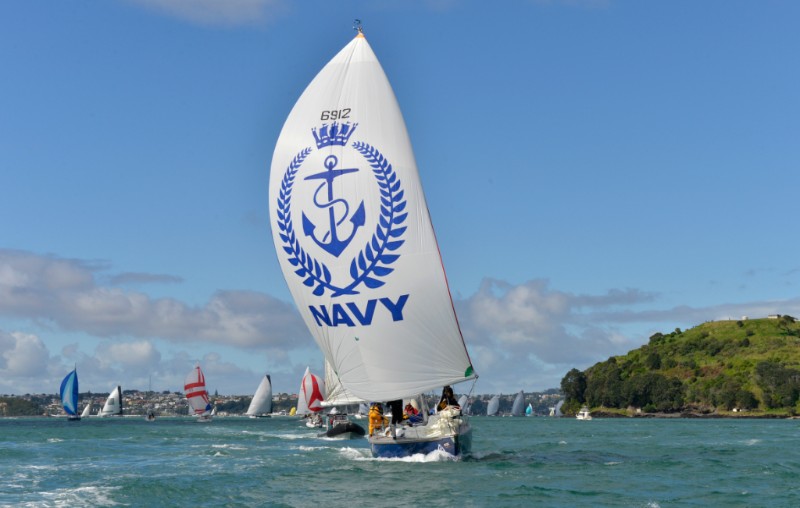 Two organisations who pride themselves on the wellbeing of New Zealanders at sea are due to square off as part of next week’s PIC Coastal Classic yacht race from Auckland to the Bay of Islands: it’s the New Zealand Defence Force vs a crew of Auckland Coastguard volunteers.

The New Zealand Defence Force will enter one of their 40ft Sail Training Craft with a crew that represents various defence organisations and with a good mixture of youth and experience.

Five of the crew will drive up from the Army base in Linton, three are regular serving Navy, and rounding out the team is a NZDF civilian employee. Since commissioning three Sail Training Craft 25+ years ago, the Navy has entered at least one boat (but more often than not, three boats) in a total of 22 races.

Last year, the NZDF crew beat Auckland Coastguard’s unofficial entry- Campaign – by just 13 minutes over the race which took them approximately 10 hours to complete. The NZDF, on board Manga II, were the 107th boat to cross the finish line, and Campaign (skippered by Rebecca Jackson) were 113th to finish the “Great Race North”, the Coastal Classics’ unofficial moniker.

While they don’t officially represent the Auckland Coastguard, every single one of the crew on board Campaign are dedicated volunteers with plenty of sea miles under their belt. Their experience from last year has led them to recruit additional shore crew to stock the boat with extra supplies for the return leg and plenty of baking for the race too.

The crew on board the Navy’s Chico 40, Mako II will use both the race up, and the return passage, for the crew to advance their Skipper Restricted Limits training records.

The PIC Coastal Classic is a 119 nautical mile yacht race from Auckland to the Bay of Islands, organised by the NZ Multihull Yacht Club. It can be a sprint for the fastest boats who have finished in less than six hours, or a challenging marathon for the crew on some boats that may take more than 24 hours to reach Russell.

The race starts from 9:30am on Friday 19th October in the vicinity of Devonport Wharf.