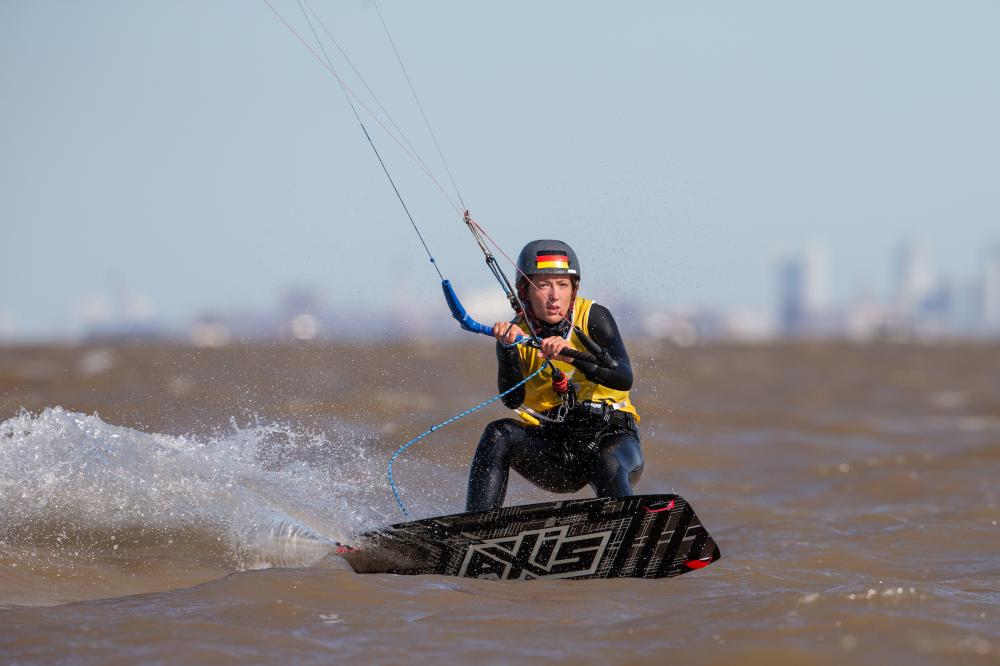 A dazzling display on the water from Alina Kornelli (GER) ensured she remains top of the Girl’s Kiteboarding fleet at the Youth Olympic Sailing Competition at Club Nautico San Isidro, Buenos Aires, Argentina.

With lighter windspeeds than the previous day, all three classes were able to race. Windsurfing reverted back to fleet racing, and though Kiteboarding was initially affected by a postponement which saw them return to shore, the wind picked up sufficiently for them to return to the water.

Kornelli has won four out of five races so far, including two wins today, and is five points ahead of Sofia Tomasoni (ITA) in second and six points ahead of Nina Font (ESP) who is third.

“The last A final was really close between me and Nina; at the beginning I was first, then she was first, but I won it in the end,” Kornelli explained. “I’m really happy with my results in the competition. I will try and stay focused and really do my best.”

In the Boy’s fleet, Slovenian kiteboarder Toni Vodisek moved into the top three with a win in the last race of the day.

“The wind was pretty light today; we had the 17s, the biggest kites we have, and we finished a race from yesterday before doing two more,” he said. “Yesterday I was unlucky as the equipment I took was too small, but today with the same equipment it went better.”

In the Nacra 15 fleet, the Dutch duo Laila van der Meer and Bjarne Bouwer stormed into second place, taking two wins from four races. They are now six points behind leaders Dante Cittadini and Teresa Romairone (ARG) who took a race win, a second, a sixth and one seventh, which they discard.

“The wind was really shifty and gusty; it was hard to predict what was going to happen,” explained van der Meer.

“The number three is always the tricky spot, so the number two feels good, but we’re still not there,” added Bouwer. “The Olympics is so much more than a normal regatta. My roommate won a medal in rollerspeed skating and he was so happy. We are enjoying every second.”

In Girl’s and Boy’s Windsurfing, the overall leaders remained unchanged as Giorgia Speciale (ITA) and Alexandros Kalpogiannakis (GRE) kept up their excellent form on the water. Speciale has yet to finish outside the top three during the competition and is 13 points ahead of second-placed Manon Pianazza (FRA).

Entering the top three for the first time is Naama Gazit (ISR) who is now level on points with her French opponent.

“I started the day not so good (7th, discarded) but my second race was better and in the last race I finished second,” she said. “The wind was really shifty and the course kept changing so we spent a long time on the water, but I’m really happy to be in the top three.”

There’s a close fight between Kalpogiannakis and Nicolo Renna (ITA) in the Boy’s fleet. The pair are separated by six points, with third-placed Finn Hawkins (GBR) 15 points behind the Italian.

“It was a really tricky day today; a lot was happening and the wind was flicking about all over the place,” said Hawkins. “You had to pick your spot, find your outwind and try and get some consistent results.”

Racing continues at 12:00 local time on Thursday 11th October. It will be a reserve day for the Nacra 15 fleet, meaning only Kiteboarding and Windsurfing will be competing.