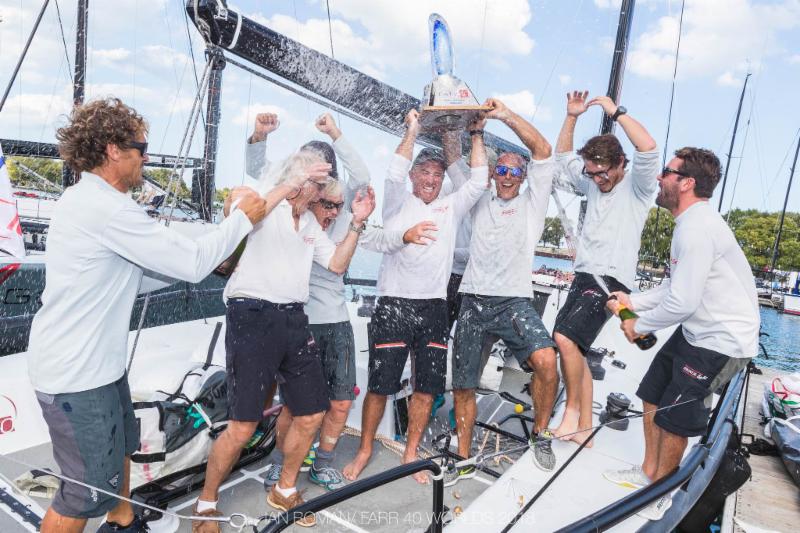 CHICAGO, IL (October 9, 2018): The culmination of the 2018 Farr 40 World Championship served up nail-biting competition, coming down to the final race of the event as Wolfgang Schaefer's Struntje light edged out Alex Roeper's Plenty which finished a critical two boats behind nullifying their two-point lead. One of the two boats was the Corinthian Champion, Leif Sigmond and Marcus Thymian's Norboy, capping-off a dominant performance over the Corinthian fleet.

The final day of racing at the 2018 Farr 40 World Championship saw the least amount of breeze and flattest water with unseasonably warm temperatures for fall in Chicago. With southerly winds dipping below 10 knots, teams who excelled in the lighter conditions established themselves early.

Struntje light and Plenty entered the day tied at 27 points. The German boat established themselves early, seemingly putting the Championship title in the bag after Race One as they moved up the standings three points ahead of Plenty. However, all plans were cut short when they finished a brutal ninth place in the second race, preventing early celebrations and handing the lead to Plenty.

“We had a little bit too much bad luck in the second race,” lamented Schaefer. “We said, 'Okay, there's one man in the sky that can pull us through it.' And then, he did!”

The event was then decided on the final leg of the last race as Struntje light sailed to their first race win of the event. As the German team watched the course behind them from the finish, both John Gottwald's Eagles Wings and Norboy crossed the line in front of Plenty, narrowly edging out Roeper's team by less than a boat length. “The problem was we didn't know how many points Plenty would be behind,” said Schaefer. “Having the Commodore of Chicago Yacht Club between us helped a little bit.”

“The truth is we were just sailing our best race and letting the other boats sort themselves out,” said Sigmond. Thymian elaborated, “We were just trying to not get a penalty and there could've been a few close calls at the finish with Eagles Wings and Plenty.”

Norboy has come a long way since their World Championship debut finishing last place 22 points behind the fleet in 2012. Despite not winning a single race in the event, Norboy won the Corinthian Fleet by 15 points. “We learned a lot from the Flash Gordon program. We wouldn't be here without their help,” said Thymian.

Elsewhere in the fleet, Chicago natives Helmut and Evan Jahn's Flash Gordon 6 came in for a dominating first place finish in Race Two to finish in third place. It was a come-from-behind move as Alberto Rossi's Enfant Terrible had had a firm grip on the fleet from strong finishes in the first two days of the. Unfortunately for the Italians, they didn't excel in the shifty air that Flash Gordon 6 is accustomed to in their home port. The duo ended the event tied at 53 points with the Jahns having just enough bullets to secure their place on the podium.

“I've been sailing this regatta since 2002 – with very few exceptions. The teams here in Chicago sailed at a much higher level. It's so much fun sailing against them,” complimented Schaefer. “We've known our friends Alex and Alberto a long time – they're why we've been part of the class for so many years. That is the Farr 40 for me.”