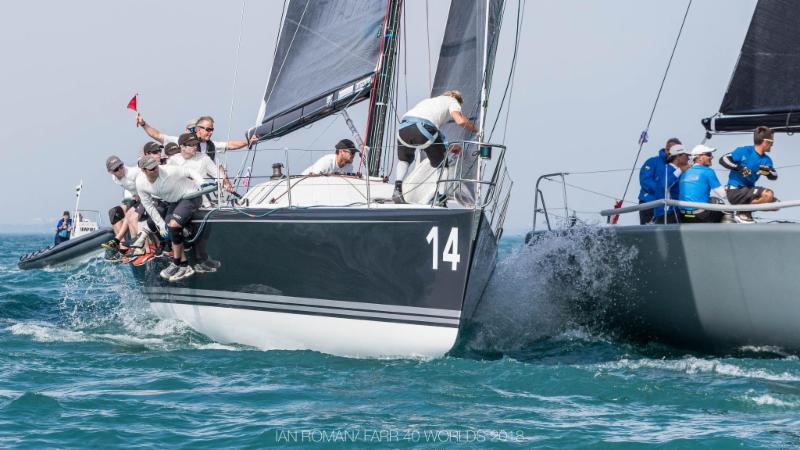 CHICAGO, IL (October 8, 2018): Competitors at the Farr 40 World Championship have emphasized that consistency is key and that is what Alex Roeper's Plenty had going for them today. Day Three's racing has both Plenty and Wolfgang Schaefer's Struntje light tied at the top with 27 points. Chicago's weather swung 180 degrees overnight to a shifty southerly breeze bringing unseasonably warm temperatures and flat seas. Unfortunately, the oscillating air refused to settle, bringing an early end to the day after only two races.

The first race dethroned and derailed Alberto Rossi's Enfant Terrible when they tacked within the three boat lengths circle at the first windward mark trying to shoot the mark and edge out Plenty. Plenty protested, and Rossi's team went into their penalty turns just outside the windward mark. The Italian team couldn't regain their ground as the rest of the fleet slipped past for the remainder of the day.

“If you get a protest in those conditions, you're in trouble,” sympathized Roepers. “You've got a lot of boats coming at the same time and you have to step out to do your 720. It takes tremendous mental toughness and good luck to come out of that.”

Luck wasn't on the Italian team's side as they continued to fall in the rankings sliding seven points behind both first place Plenty and second place Struntje light. “We are fast downwind, but today, we went to the right side and it turned out to be the slow side,” said Struntje light's owner Wolfgang Schaefer. “We were quick upwind, though. We were usually leading at the windward mark, but we couldn't bring it home at the end.”

Helmut and Evan Jahn's Flash Gordon 6 was also thrown off the horse in Race One with a leeward mark penalty when their spinnaker touched Norboy. The team wasn't able to recover quickly as they finished second to last in fleet. However, mental fortitude proved to be Flash Gordon 6's strong suit as they finished Race Two in first place.

While the leaderboard suffered in Race One, Jeff Carter's Edake from Australia had a moment of glory resulting in a bullet and the first Corinthian boat to earn that placement at this year's World Championship. Carter's team had a clean start and was able to keep with the pack into the top mark, but it wasn't until they went right on the downwind that they shifted into gear. “Most of the boats gybed out to the left with a gybe-set and we hung out to the right a bit further. Low-and-behold, we pulled four boats in on the downhill,” elaborated Carter. Edake was just behind Struntje light at the bottom mark and was able to hold their position for the second upwind leg while reusing their downwind strategy to pass the Germans in the end.

“We're very familiar with a battle all the way to the end at the World Championship events,” said Roepers alluding to when Plenty won Championship events 2016-17 by a marginal two points. “It's up to three boats tomorrow; seven points in a 14-boat class is nothing. Enfant Terrible is not out of it and we're tied with the Germans. May the best man win.”