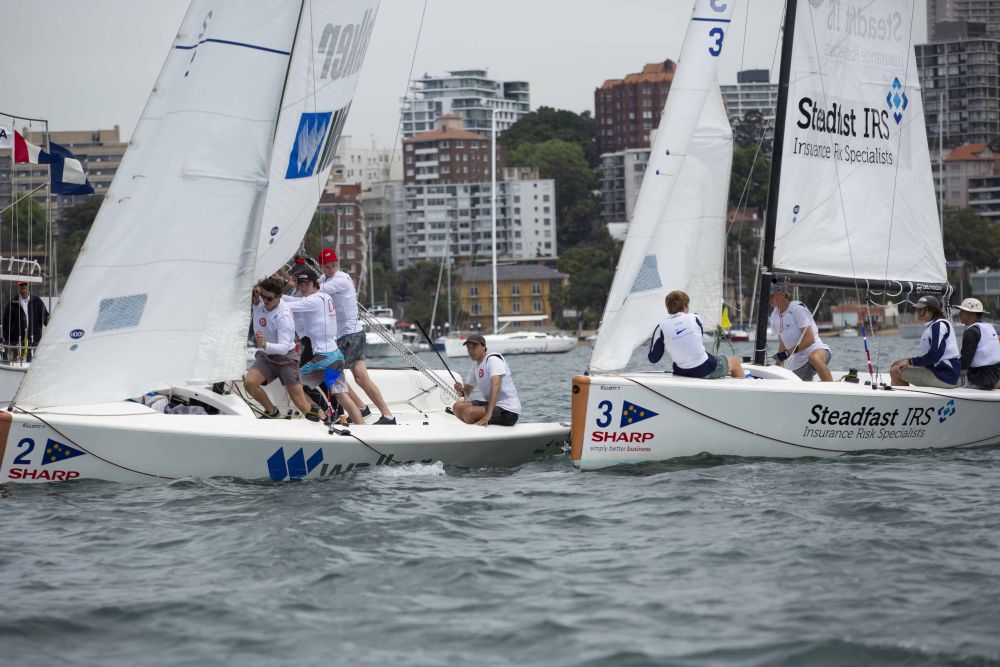 The Cruising Yacht Club of Australia (CYCA) have dominated the opening day of competition at the 2018 Sharp Australian Youth Match Racing Championship with James Hodgson & Finn Tapper both remaining undefeated after the first seven flights in the Championship. Defending Champion, Tom Grimes (CYCA), almost had a perfect day, only losing to fellow club member James Hodgson in the final flight of the day in an exciting race with several lead changes and penalties.

This is the third and final time the CYCA will host the Australian Youth Match Racing Championship, having hosted and won the event for the past two years. For the 2018 event, 10 teams representing eight yacht clubs from five States are competing, showcasing the most diverse entry list ever for the Championship.

Today, racing took place in Rushcutters Bay with a variable westerly breeze eventually dying away then turning to a light sea breeze from the North East. Starting on time, flight 1 of the Championship had a slow start with half of the matches having to be abandoned as the westerly breeze shut down. After a one and a half hour delay, racing was re-positioned off Darling Point as the north easterly filled in enabling the Race Committee to push ahead and complete 70% of the first-round robin.

With the CYCA teams taking control in each of their races, the remaining clubs fought to stay in touch. Newcastle Cruising Yacht Club’s (NCYC) Thomas Steenson currently leads the chasing pack, having notched up three wins from their seven starts.

Tomorrow racing will continue with the intention to complete Round Robin 1 and commence Round Robin 2 at 1000hrs.