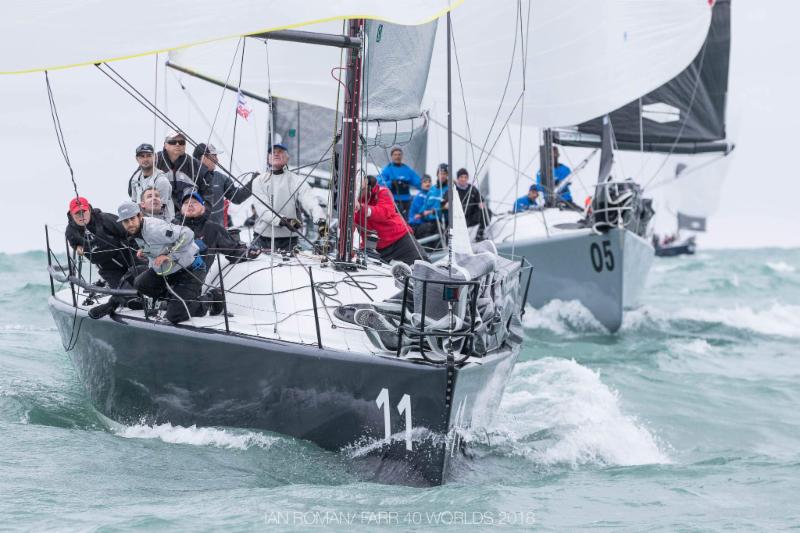 CHICAGO, IL (October 6, 2018): The point spread grew at the top of the Farr 40 World Championship leaderboard on Day Two with Enfant Terrible finishing at the front of the fleet while Plenty fell to third. Three races were run in a confused sea state of 4-6 foot waves with wind decreasing throughout the day from 16 down to 11 knots.

Hailing from Australia, Gordon Ketelbey's ZEN had never raced in Chicago prior to this year's Worlds. “So far it's been cold, wet, rainy and very windy,” said Ketelbey. “I was downstairs when we left the harbor today and I felt the bump-bounce-bump-bounce. I said to myself, 'Here we go another day in Chicago'.”

At the top of the leaderboard, Alberto Rossi's Enfant Terrible now holds a four-point lead on Struntje light and eight-points on Plenty going into Day Three, despite losing their footing in the third race. “For the first two races we had fantastic starts and we were able to maintain our position for the whole race,” said Rossi. “For the third race, we had a good start, but we were a little close to other boats so we couldn't follow our planned course. We – and several other boats – made the mistake of using the S1.5 instead of the S1 spinnaker as well.”

Elsewhere in the fleet, not to be dismayed by their results on Day One, Helmut and Evan Jahn's Flash Gordon 6 recovered again after a shakeup in the second race to redeem themselves with a bullet in the final race of the day. “We did everything wrong in the start of the last race. We had to duck the whole fleet and we thought we were dead last,” said Helmut. “When we finally turned up to the left again, it looked like we were doing quite well. Only Struntje light was ahead of us and we finally got them in the first downwind mark rounding then rounded boat lengths ahead of them on the second upwind.”

Leading the Corinthian Fleet, Norboy gave Enfant Terrible a run for their money in the first race of the day with a downwind dogfight to the finish. “It was a great moment to be surfing downwind with the leader of the regatta,” said owner Marcus Thymian. “Between match race tactics and pumping the sails to surf the waves, it all came down to who was able to get their boat going faster.” Enfant Terrible narrowly accelerated ahead of Norboy to finish just a half a boat-length ahead of Sigmond and Thymian.

Norboy is now watching their back as they stand currently tied with ZEN at 35 points.* “Both Norboy and us didn't have a particularly good day,” Ketelbey clarified. “It swings around a bit. It's supposed to be light winds and flat water the next two days. I don't know who it's going to favor, but I hope it favors us. We just have to sail fast and keep out of trouble. There's a long way to go in this event.”