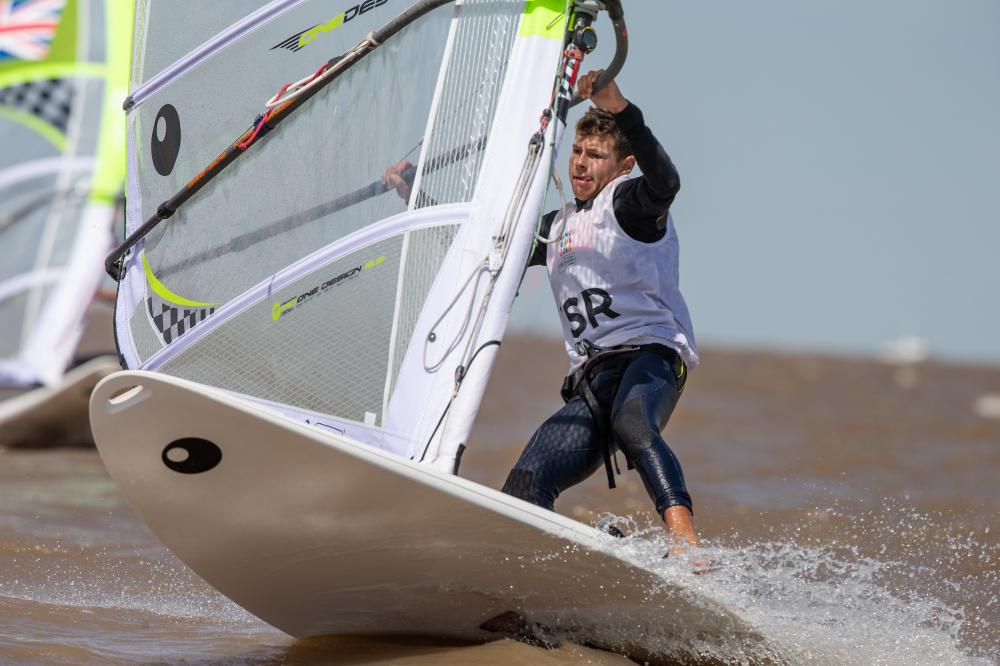 Battle on in the windsurfers

Ahead of Friday’s Medal Race, the battle to claim a spot on the podium amplified in the Windsurfing class at the Youth Olympic Sailing Competition at Club Nautico San Isidro, Buenos Aires, Argentina.

Shifting winds on the coldest day of the week so far brought new challenges for the Girl’s and Boy’s fleets, but both were able to complete three races each. However, Tuesday’s postponed slalom elimination race could not be finished, and will be abandoned.

And the podium places are by no means wrapped up yet. Both fleets have the prospect of two very different fights for a bronze medal. Boy’s windsurfer Tomer Vardimon (ISR) and girl’s windsurfer Yana Reznikova (RUS) both sit on the outskirts in their respective fleets in fourth place.

Reznikova won one of today’s three races in the Girl’s fleet and is now only two points behind third-placed Naama Gazit (ISR).

“It was cold but I enjoyed my day on the water, and I’m happy with my results,” she said.

“When I came here I just wanted to enjoy this amazing and wonderful experience – I didn’t think about medals.”

Vardimon has a tougher battle on his hands, as third-placed Finn Hawkins (GBR) is 11 points ahead of him, but he has accumulated more top-three finishes than his British opponent so far this week and will hope for a strong medal race tomorrow.

“Third place [Hawkins] has gained a few points on me, but I will try to catch him tomorrow,” Vardimon said.

“I can learn from every single race here. It would be great to win a medal.”

Both Alexandros Kalpogiannakis (GRE) and Giorgia Speciale (ITA) are in pole position to claim gold in their respective fleets.

Speciale is an astonishing 17 points ahead of Manon Pianazza (FRA) in second place – the Italian has only finished outside the top three once, a fourth place in Race 11 which she discards.

The gap between Kalpogiannakis and second-placed Nicolo Renna (ITA) is a smaller seven points, with the two exchanging firsts and seconds for most of the week.

Tomorrow’s final windsurfing race is non-discardable and to claim gold Speciale needs to finish in the top 17 and Kalpogiannakis in the top seven.

Kiteboarding were able to complete one race, with the top three of both the Girl’s and the Boy’s fleet remaining the same. With their medal race scheduled for Saturday, plenty could change in tomorrow’s races.

In the Girl’s fleet, another win for Alina Kornelli (GER) gives her an eight-point lead, but the chase for the silver and bronze medals is much closer, with six athletes separated by just seven points.

Currently sitting second is Sofia Tomasoni (ITA), who is only a point ahead of Nina Font (ESP) in third.

“Today was pretty cold and I struggled with that; I had to race in the Final B, which I won, but I’m not so happy with my results,” said the Italian.

“I’m still second, so I can’t complain. You really have to be focused on what you’re doing and take a good kite size.”

The fight for gold is not quite as clear-cut in the Boy’s fleet; Deury Corniel (DOM) won today’s race, but he’s just five points ahead of Cameron Maramenides (USA) and six ahead of Toni Vodisek (SLO).

“There’s a lot of fierce competition and a high level of kiters, so I’m just trying to stay focused,” Maramenides said.

“It’s a pretty tight race between the three guys for gold and silver – I’ll be going for gold over the next two days.”

Racing continues at 12:00 local time on Friday 12th October. The Boy’s and Girl’s Windsurfing fleets will sail their medal races, while the Mixed Nacra 15 fleet will resume racing after today’s reserve day.