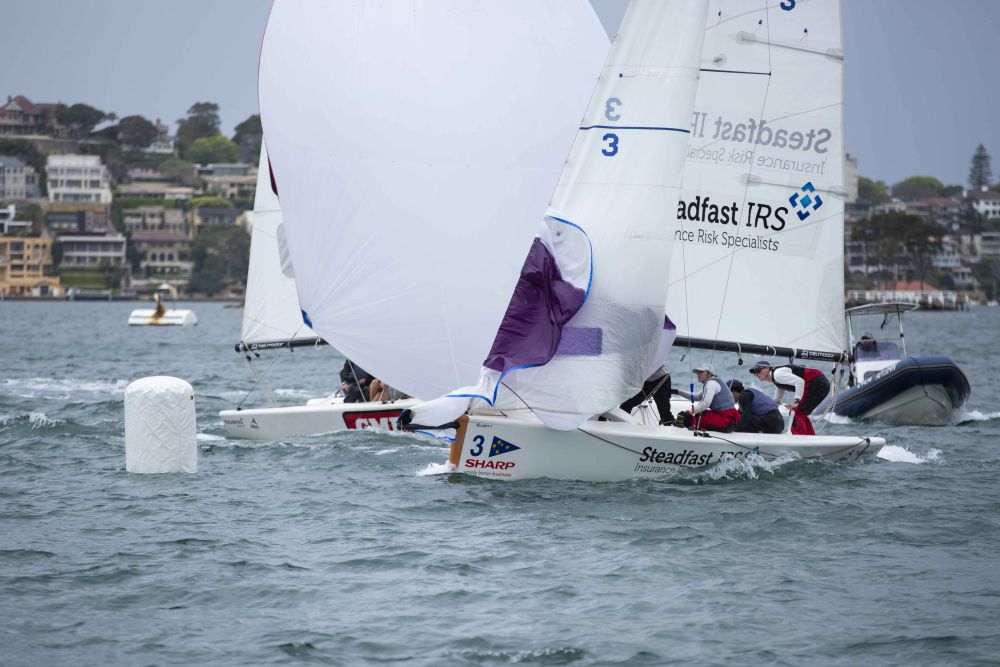 Tom Grimes and his CYCA team during their final race of the round robin series. CREDIT - Hamish Hardy CYCA

2017 Australian Youth Match Racing Champion, Tom Grimes, representing the Cruising Yacht Club of Australia has made an impressive finish to his double round robin stage, taking out the top spot with a 17-1 (win-loss) scorecard, to go through Round Robin 2 undefeated, knocking regatta leader James Hodgson to second place after the Round Robins.

With another shifty and puffy South-Easterly breeze on Sydney Harbour, the 10 competing teams completed the five remaining flights to finish off the qualifying stage. Over the past three days, the Race Committee has managed to complete 92 races and will now move into the knockout rounds with the semi-finals and finals scheduled for tomorrow.

The final 5 flights had plenty of action with Grimes’ bowman getting caught out in a spinnaker set and thrown overboard in their must-win match against Hodgson. Quick thinking from both the bowman and skipper saw him hauled back on-board within a few seconds and only a boat length lost. This wasn’t the only ‘swim’ of the day, with another CYCA bowman also falling off in a set. Again thankfully, this didn’t affect the outcome of the race.

At the end of the double round robin, the Cruising Yacht Club of Australia’s teams continue to lead from the front, whilst the final semi-final berth went to fellow Sydney yacht club, the Royal Prince Alfred Yacht Club with Niall Powers helming.

With the round robin complete, the Race Committee pushed ahead with Race 1 of the semi-finals, with Grimes choosing to race Powers, leaving Hodgson & Tapper to face off in the other pairing. Although Grimes finished a massive seven points clear of Powers after the Round Robin, their opening race was extremely close as a fading South-Easterly shifted further east. Grimes eventually took out the race and now leads the series 1-0 heading into tomorrow.

The other semi-final was even closer, with Tapper holding a small advantage for the first three legs of the race. But again in the fading, shifting breeze, Hodgson looked to attack. With the gap closing between the boats, Hodgson managed to roll Tapper after a slow gybe. But Tapper fought back hard again and looked to reverse the rolls again, but in a close gybing duel, was penalised, gifting Hodgson the overnight lead in their series.

Tomorrow the semi-finals will commence at midday, with the first to three point Final series expected to start at approx. 1330hrs. Racing will once again take place in Rushcutter Bay.