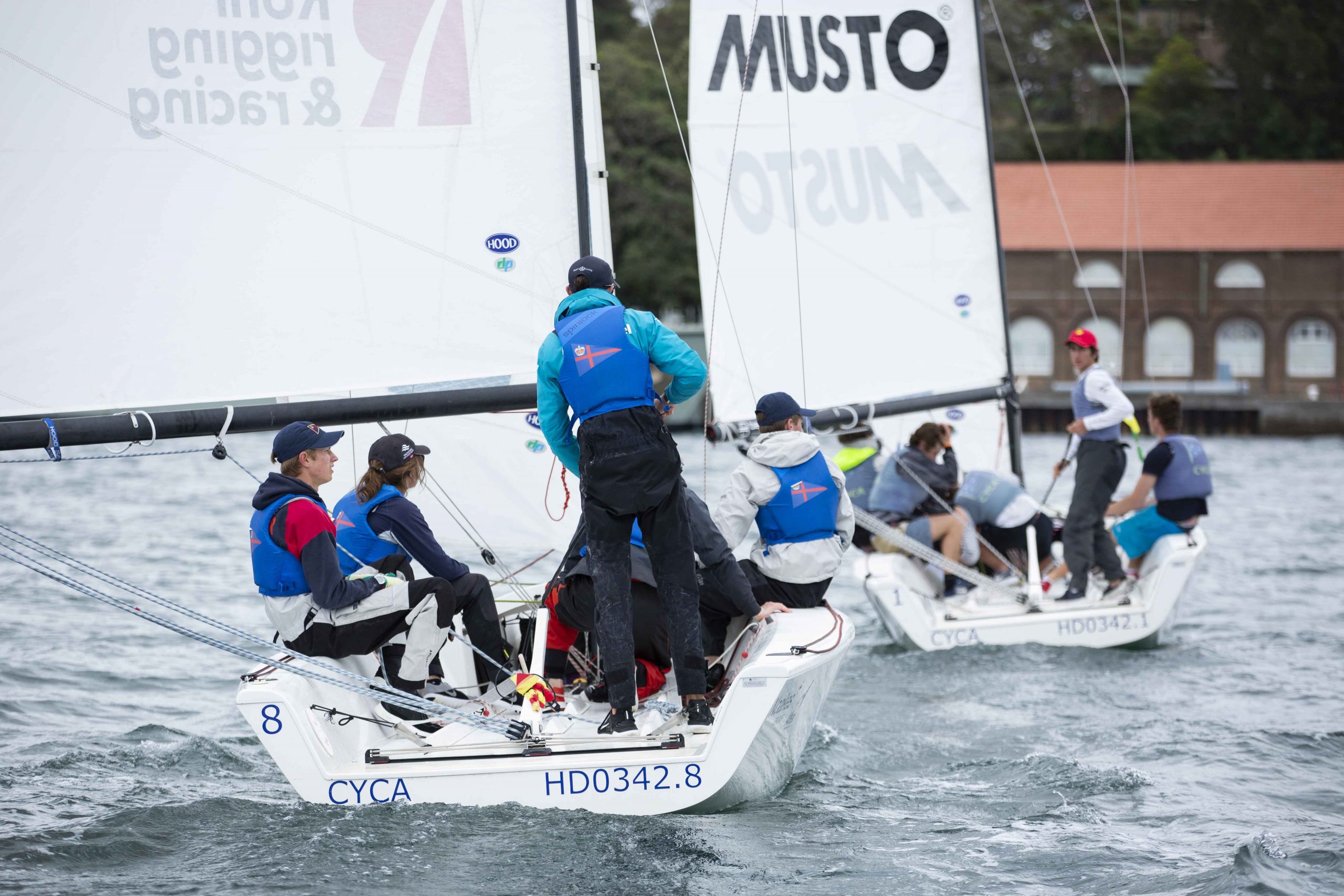 After an epic final battle, the Sharp Australian Youth Match Racing Championship came down to one race – a rematch of the Finals from 2017, with James Hodgson/Harry Hall/Ryan Wilmot/John Cooley/Charlie Gundy looking for revenge 12 months later.

After taking out Race 1 of the Final, and leading for almost the whole of Race 2, the comeback looked complete. But defending champions, Tom Grimes/Dante Olivieri/Jess Grimes/Eric Sparkes/Emma Harrison’s never-die attitude saw them claw back and overtake in the dying stages of the race, only winning it by a mere second to level the series.

In a fading, shifting breeze and rain clouds on Sydney Harbour, the final, winner-takes-all race started with 2 minutes to go before the regatta deadline kicked in.

In the pre-start, Grimes made a bold manoeuvre. He came within an inch of his opponent in a last-minute hook attempt, which paid off, forcing Hodgson into a slow 360 degree turn only seconds before the start.

But again, the fickle and shifting breeze was read better by Hodgson on the first upwind leg, nullifying Grimes’ early advantage to level, then pass, at the top mark after a luffing duel.

With the final race living up to expectation, both boats split the downwind leg with Grimes again passing coming into the bottom mark. An intense tacking duel plagued by a heavy downpour began with both boats maintaining the three-length gap until the top mark before a huge split on the downwind leg.

With better positioning and bold tactics by the defending champions, they gybed away from their opponents, finding new breeze to hold onto their lead.

As the rain cloud passed and the breeze faded away once again, Hodgson could do nothing but look on as Grimes gybed clear into the finish line, becoming only the fourth team to win the title back-to-back.

“We are absolutely stoked,” winning skipper, Tom Grimes commented back at the CYCA. “Honestly, the Final could have gone either way, and James and his team put up an amazing fight.” Grimes ended.

It was another successful story for the Cruising Yacht Club of Australia, host of the event. It is the first time a club has taken all podium positions in an Australian Match Racing National Championship.

Finn Tapper took out the petit-final 2-0 over the Royal Prince Alfred Yacht Club’s Niall Powers, showcasing the incredible depth, talent and commitment the CYCA Youth Sailing Academy is producing in its 25th year.

The morning began with the sail-off series’, with Australian Schools Match Racing Champion Will Sargent (RYCT, TAS) taking out his series 2-0 over Thomas Steenson (NCYC, NSW) to be the top non-NSW team.

With 10 teams, eight yacht clubs and five states/territories competing, the 2018 event also marked the most diverse competition ever in the 18-year history.