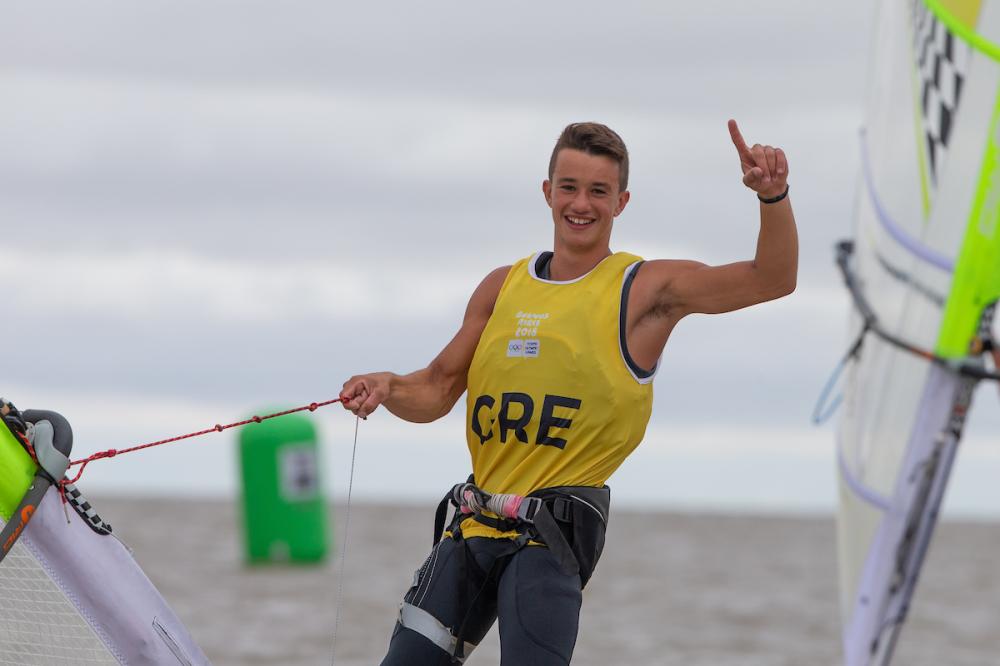 The first Medal Races were held in the Girl’s and Boy’s Windsurfing class, with both fleets completing 11 races in the series over the course of the competition.

A seventh-place finish in the Medal Race – his lowest fleet race score of the week – was enough for Kalpogiannakis to wrap up gold.

The Greek has performed consistently well throughout the competition, with five wins overall, and finished the final race far enough in front of nearest rival Nicolo Renna (ITA), whose 13th-place finish was good for silver.

And the 16-year-old, who came second in the Youth Male category of the Techno 293+ World Championships in August, admitted that winning a medal was more than he originally hoped for.

“I’m very excited about winning gold – I didn’t expect it, but I’m happy to achieve it,” Kalpogiannakis said.

“The Youth Olympic Games have helped me learn to concentrate on every moment and to never give up.

“Next I have the Europeans in Greece, then I’ll take a holiday before training for next season.”

Finn Hawkins (GBR) finished third in the Medal Race to confirm his bronze medal; Tomer Vardimon (ISR) came second in the race but was too far behind points-wise to trouble the Brit.

In the Girl’s fleet, Speciale approached today’s Medal Race with a 17-point lead over second-placed Manon Pianazza (FRA). As long as she made a clean start and sailed a comfortable race, the gold medal was hers.

But she turned on the style, taking a huge lead early on and crossing the finish untroubled to claim her fifth victory of the week and seal her gold medal.

Pianazza finished second to confirm her silver medal, while the battle for bronze reached a thrilling conclusion as Yana Reznikova finished the race in third place to pip Naama Gazit (ISR), who came sixth, to the final podium spot by just one point.

With only one race result outside the top three, 18-year-old Speciale, who won bronze at the Youth Sailing World Championships in July and gold at the RS:X Youth European Championship in August, will now turn her attention to senior racing.

“This week was so hard and I’m so happy about this result,” she said.

“Preparation was the most important thing; we trained two years for this championship.

“Now I will have one week of rest before I start training again, because next year I will start racing in the senior RS:X fleet.”

Elsewhere, the Nacra 15 fleet sailed three races to complete their 12-race series ahead of their Medal Race tomorrow.

Home favourites Dante Cittadini and Teresa Romairone (ARG) remain in pole position for gold, leading the fleet by 10 points. With little separating the top four, all three medals are up for grabs tomorrow.

The Girl’s and Boy’s Kiteboard were unfortunately unable to race today, with wind conditions unsuitable. They will look to progress with their Final races tomorrow.

Racing continues at 12:00 local time on Saturday 13th October, as the Nacra 15s head out onto the water first to sail their Medal Race.