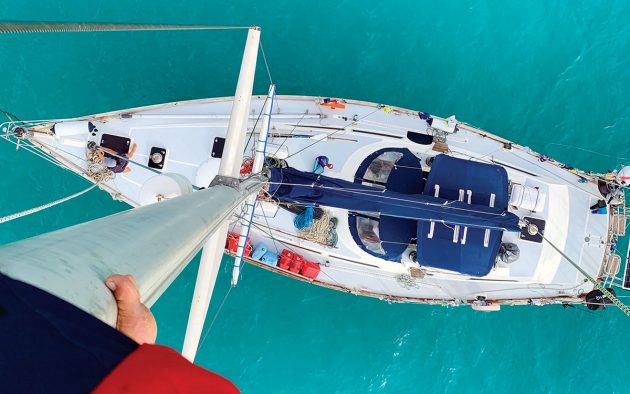 Dave Carey discusses how he made major changes to the rigging of his 47ft cruising yacht, all- while living aboard with his family in the Caribbean.

As a former RAAF (Royal Australian Air Force) aircraft technician, I was always going to perform a thorough rig check before attempting my first ocean crossing.

Our 1984 Moody 47 Roam is a solid blue water performer, but as I am quickly learning, boats are only as reliable as the owners who maintain them.

Having never attempted an ocean crossing, I erred on the side of caution in the way I prepared for our west to east passage across the Atlantic.

Our vessel, although stoutly built, was made in the 1980s and has many of the original fittings.

One of the main issues I was concerned about was the rigging and in particular, the chainplates.

The rig had been replaced seven years ago – not an overly long time as far as standing rigging is concerned – but what did set off alarm bells was that the chainplates, and their mounting hardware, had never been replaced.

After tracking down the original owners of the boat, I found she had completed seven Atlantic crossings, enduring over 30 years of cyclical loading. A little investigation showed that the deck plates had never completely sealed out the water from penetrating the deck. This combined knowledge planted a seed of doubt in my mind.

For the full story, see: https://www.pbo.co.uk/expert-advice/how-a-routine-rig-inspection-saved-my-mast-and-our-atlantic-crossing-65375