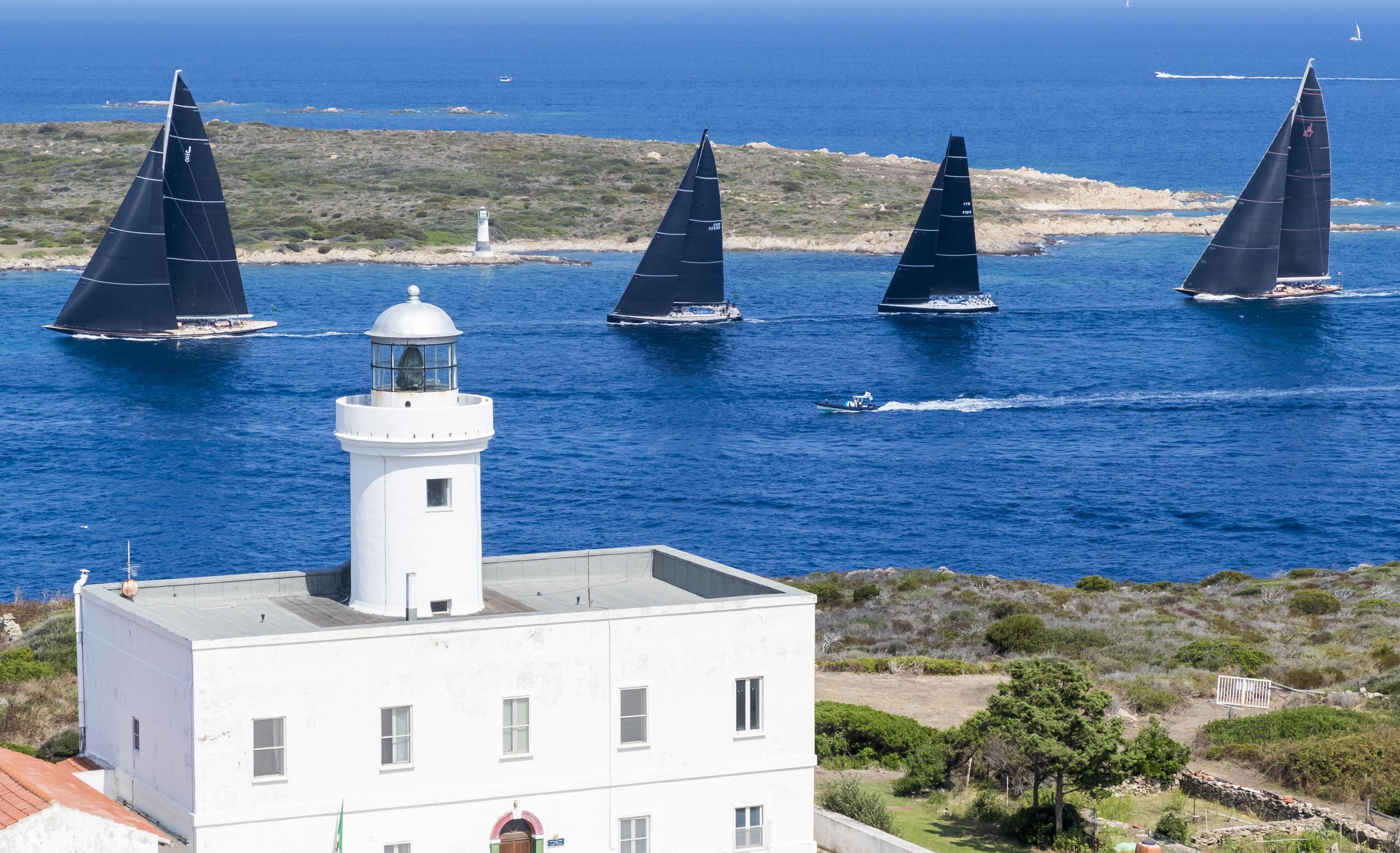 After a year’s absence, maxi racing’s premier event will return to Sardinia’s magnificent Costa Smeralda in two week’s time stronger than ever.

Organised by the Yacht Club Costa Smeralda (YCCS) in conjunction with the International Maxi Association (IMA), the Maxi Yacht Rolex Cup will take place from September 5-11. The event is the third of five in the IMA’s 2021 Mediterranean Maxi Inshore Challenge.

The Maxi Yacht Rolex Cup has been the highlight of the international maxi racing calendar for more than four decades now. The first ICAYA World Championship took place in 1980, the year after the International Class A Association (ICAYA – maxi yachts were designated ‘Class A’ under the IOR rule) had been founded by keen maxi owners – Baron Edmond de Rothschild, John Kilroy, Enrico Recchi and William Whitehouse-Vaux

The event then evolved into the Maxi Yacht World Championship and with the welcome arrival of Rolex as its main sponsor, in 1994 gained its present title, the Maxi Yacht Rolex Cup. Following the demise of IOR, the ICAYA was rechristened the International Maxi Association in 2001.

While the ICAYA maxis of the 1980s were heavyweight 70-80 footers, today the maxi fleet is far more diverse from stripped out thoroughbred speed machines to cruiser racers; from the state of the art to classics or neo-classics; ranging in length from 60ft up – the 218ft (66.7m) Hetairos is the longest ever to have entered.

IMA Secretary General Andrew McIrvine sets the scene: “After the enforced pause last year in our long series of pinnacle Maxi Championships in Porto Cervo, we are very excited to be returning with an impressively strong fleet. We have good numbers in all three of our main fleets, Super Maxi, Maxi and Mini Maxi.

“Our intention is to have larger starts with the sub-classes starting together even if later scored separately. We have gone away from rather vague and potentially contentious descriptive terms such as ‘racer/cruiser’ and now the splits are according to a formula which includes both size and performance with the aim of creating better racing.

“Now we pray for good weather conditions and of course control of the coronavirus.”

This year’s Maxi Yacht Rolex Cup has 45 yachts entered from across the globe with a particularly good spread across the three fleets.

Stealing the show in the Super Maxi class will once again be the magnificent J Class yachts Velsheda and Topaz. Topaz was originally a design by Frank Paine from 1935, but was only launched in 2015, however Velsheda is a true classic, built in 1933 for the then MD of Woolworths. Since being ‘saved’ she has been keenly campaigned for more than decades by Ronald de Waal.

While it might be imagined these massive heavy, highly loaded ancient leviathans are raced with some reverence, this is entirely not the case – their highly experienced crews throw them around with all the intensity of America’s Cup racing, for which most were designed.

An equal ‘looker’ among the Super Maxis will be the modern classic Geist, a 111 footer from Spirit Yachts. She will be joined by the Swan 115 Shamanna and MYRC long term competitor Vittorio Moretti’s Maxi Dolphin 118 Viriella.

Most exciting is the hot competition this year in the Maxi class. Partly thanks to the inclusion of the Wallys this year, the Maxi line-up includes six 100 footers. No doubt competition between the two Wallycentos, Sir Lindsay Owen-Jones’ Magic Carpet Cubed and David M. Leuschen’s Galateia will be as intense as ever.

Former IMA President Claus Peter Offen on his Wally 100 Y3K will have good racing with the new race optimised Swan 98 Be Cool.

Leading the fleet on the water will be the now Russian-owned Verdier-VPLP 100 Comanche, the highest rated entry with an IRC TCC of 2.018. In speed terms, she is followed by American George David’s all-conquering Rambler 88 and Arca SGR, once the 2003 Rolex Sydney Hobart winner Skandia, now campaigned by Trieste legend Furio Benussi. This year Arca SGR has already claimed line honours in the Rolex Giraglia and Palermo-Montecarlo.

Among the Mini Maxi classes, the hottest competition as ever will be between the former Maxi 72s. While Dario Ferrari’s Cannonball won in 2019, the newest in this fleet and another Botin design, is American three time Maxi 72 World Champion Hap Fauth’s Bella Mente, the highest rated of the Maxi 72s.

Bella Mente arrives race fit having won both Block Island Race Week and the New York Yacht Club Annual Regatta in the USA, however Hap Fauth says that they didn’t have much direct competition there.

Fauth said, “We hadn’t been on the boat in a while. It is still a new boat, so we are still shaking her out. It is very subject to fine tuning and sail shape, etc – a little tweak here or there makes a fair difference in boat speed.”

One reason they come to Porto Cervo annually is because competition here is the highest available. “It is the regatta that the whole rest of the season points to,” Fauth continues. “We love sailing out of Porto Cervo and the races are always exciting whether they are coastal or around the buoys. We have been doing it for 10 years and we have won the Worlds in 2012, and 2015 and 2016. It is a favourite of ours.”

In among the 72s will be the Austrian VO65 Sisi, while nipping at their heels will be the Hungarian Marton Jozsa’s DSS-equipped canting keeler and regular Maxi Yacht Rolex Cup entrant Wild Joe. The Davidson 69 Pendragon VI is being heavily campaigned this season by new owner Carlo Alberini.

Boat manufacturers are well represented among the Mini Maxis. The line-up from Mylius Yachts as usual has owner of the Italian builder Luciano Gandini’s 80ft flagship Twin Soul B as top contender.

Swan 601s are usually successful at the Maxi Yacht Rolex Cup and this year it will be a French match race between Gerard Logel’s @robas and Jean-Pierre Barjon’s Lorina 1895. However both will also face stiff competition from another French crew on board IMA President Benoît de Froidmont’s Wally 60 Wallyño.

In 2019 Lorina 1895 and Wallyño were both jockeying for the lead of the IMA’s Mediterranean Maxi Inshore Challenge. This Wallyño only won on the last leg of the last race.

De Froidmont commented: “It is a great pleasure finally to return to Porto Cervo both as a sailor and President of the IMA.

“As a sailor, the Costa Smeralda offers some of the most tactically challenging sailing in the most picturesque of surroundings. In our hosts the YCCS, we could not hope for a better co-organiser of the Maxi Yacht Rolex Cup, maxi yachting’s premier event.

“This year’s entry, including a wealth of new yachts across the fleet, shows that the desire of owners to race their maxi yachts has never been greater. I wish everyone good competition.”

Racing takes place over Monday 6 to Saturday 11 September with a lay day on the Thursday.