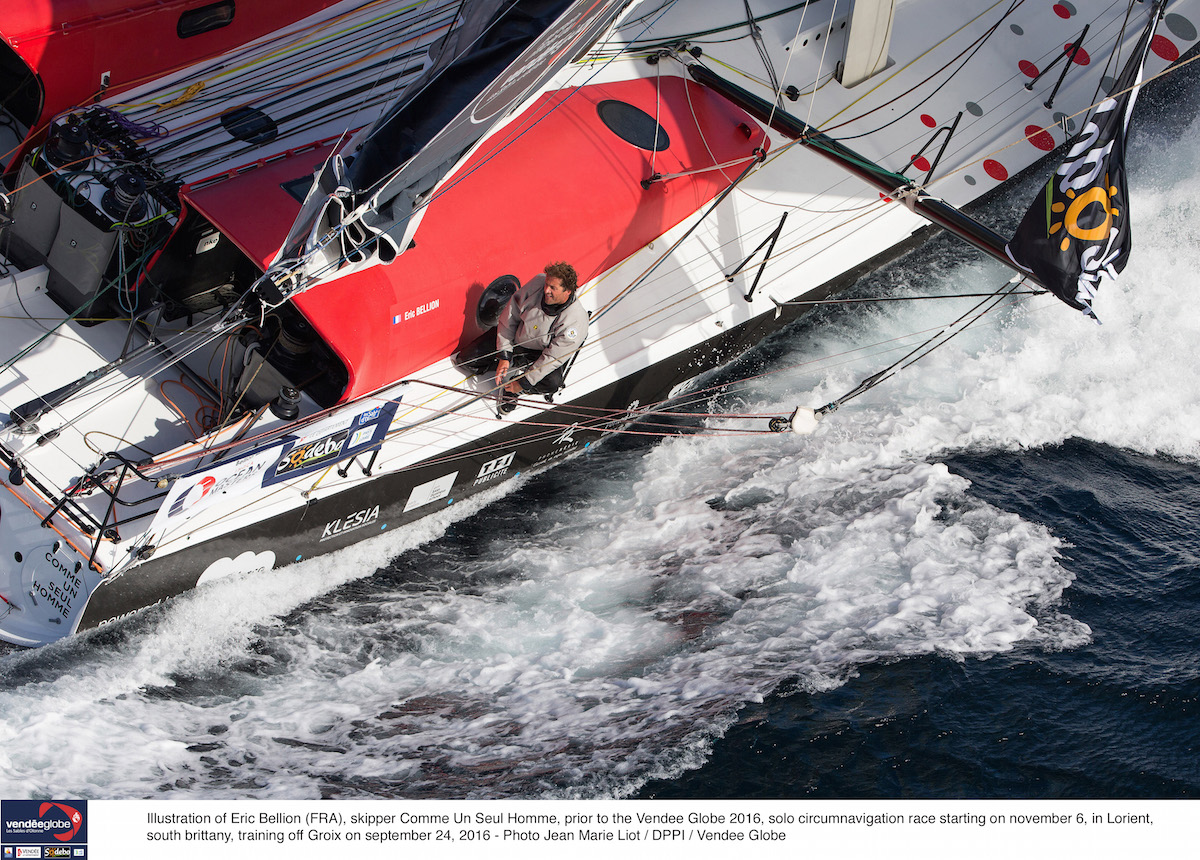 The Bay of Biscay is not giving up Eric Bellion easily as the French skipper battles upwind with no mainsail, trying to get to the finish line of the Vendée Globe. Bellion on CommeUnSeulHomme has had four tempestuous days fighting a North Atlantic depression and this Sunday afternoon there is little sign of real relief for Bellion.

After losing a section of track near the top of his mast Bellion was forced to drop his mainsail. But a blocked and twisted halyard meant he had not yet been able to re-hoist it. He got to within ten miles of the Spanish coast after Cape Finisterre and, after a short tack out to the north, was making south east this afternoon at between five and six knots. He will still see 30-35kts of knots of wind but the breeze will veer to the SE, which should allow him to make more directly for Les Sables d'Olonne. He had a little over 250 miles to the finish line this Sunday afternoon.

Winds are due to ease for the stricken Conrad Colman and move into the south west and drop to 20-25kts which should allow the New Zealand skipper to start work on attempting to step a jury rig. He is in full energy saving mode, minimising all of his electrical power use unless essential. The forecast is much more favourable for Colman.

Arnaud Boissières and Fabrice Amedeo look set to gain downwind conditions as they route towards the Portuguese coast. Boissières was almost exactly 200 miles south of Conrad Colman's position this afternoon.

Speaking to Race HQ in Les Sables d'Olonne, the solo skipper of La Mie Caline, said: “I am 1000 miles from the finish but these can be the most difficult and dangerous miles of the race. Anything can happen at any time. Every step brings me closer to home but it feels long and hard. The last stage for me is to Cape Finisterre. Right now I am upwind and it is not slamming too badly. I take it as it comes.”

Boissières added: “Last night I had between 12 and 35kts and this morning a huge range of wind in a squall, for two and a half hours I was making two knots. Now, until I finish I should have a westerly wind. I hope to arrive between the 16th and 17th of February. Yesterday I was quite optimistic. Right now it is strange because it feels so close but far away, all at the same time. I am affected by what happened to Conrad, that scares me.”

Amedeo, racing Newrest-Matmut, is a further 200 miles behind Boissières and so should be expected to finish less than 24 hours after La Mie Caline.

Conditions meantime are favourable for Alan Roura and Rich Wilson. Roura – just north of the latitude of Madeira – will have to arc northwards to get round the high pressure zone but his complicated weather situation is evolving all the time.

Slowed in the high pressure ridge Wilson has been examining the predicted track and evolution of the next low pressure and believes, as it looks now, that he will not need to go too far north into its track, instead being to use the downwind conditions in the south of the system. The American skipper is now expected to finish in Les Sables d'Olonne in around ten days time, now with less than 2000 miles to sail.

When making just four to six knots Wilson said today: “There is a big low pressure system coming out of the north east of the USA but it forecast to not come all the way across but head across the north east. We will carry on the north east and get updates every six hours, we need to watch that. It looks like the Azores high pressure system will re-establish itself between the Azores and the Bay of Biscay. So we will see how that materialises.

“The idea is that we can stay on the southern peripheral of the system, take advantage of the downwind aspect of it and not get into the north where the really strong winds are. Again if goes where it is forecast then it is all do-able and so it depends how far south we want to stay. My inclination is to stay away.

“Yesterday I had some sun and that helps a lot. It seems like this whole race has been very grey compared to 2008-9 when it seemed like we saw the sun a lot more along the way. That was nice. And there was a nice big full moon last night which is a bonus. As we are out of the stronger part of the trade winds then he sea state has gone down which is great relief. The boat really took a pounding. Everyone in front that I was in touch with said the boats really took a beating upwind.

“We are closer to the eastern side of the Atlantic. In 2008 it was a strange situation. I had trouble going across the trade winds, we had no ballast tanks. We were really overpowered with the staysail and so I had to sail a lot of time with the storm jib then in 2008. We have done better this time.”

It is looking increasingly like Wilson and then, close together, Didac Costa, Romain Attanasio will finish on consecutive days next week. Costa is 200 miles behind Wilson this afternoon and Attanasio only 40 miles astern of the rival he has duelled with since the south of Australia. Wilson is on course to better his 2008-9 time of 121 days on his Great American III.