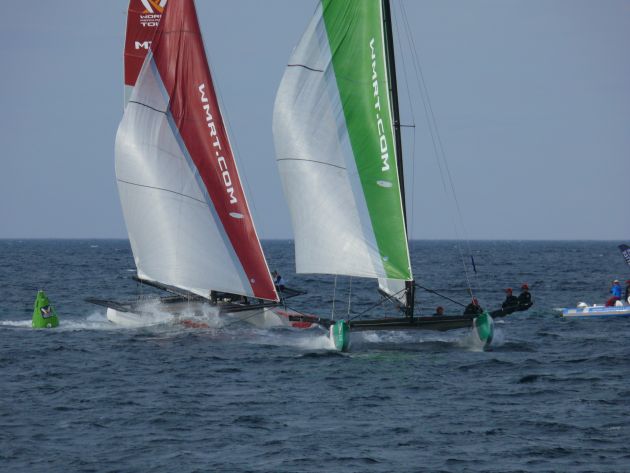 Though David Gilmour still leads the Geographe Bay Cup, he is no longer undefeated and is under pressure with three other skippers just one point behind him. Fellow Western Australian Torvar Mirsky knocked Gilmour off his pedestal, and is one of the three skipper putting on the pressure.

It is all local skippers at the top of the leaderboard after day two of the regatta, with Matt Jerwood and Gilmour’s younger brother Lachy also just one point off the lead.

The thrills and spills came thick and fast on Geographe Bay, with the wind still virile, in the 15 to 25 knot range during the day. First to take a swim was Robbie Gibbs, with his lack of experience taking its toll, but the spills were not confined to the lower end of the leaderboard. An embarrassed Torvar Mirsky managing to put his mast in the water in his match against Evan Walker.

The Mirsky versus David Gilmour match was a nail biter, with Torvar grabbing the advantage in a tight start. He held onto his lead on the first three legs, ensuring that Gilmour had no passing opportunities, but downwind for the second time the game closed right up and it looked as if Gilmour might grab the advantage.

Mirsky, always tactically smart, managed to cling to a slim lead as they started the final upwind leg, from there he showed no mercy, relentlessly staying between his prey and the mark to chalk up the win.

Although Swedish skipper Mans Holmberg and Sydney’s Evan Walker are two points off the lead, they have also sailed two fewer races than the Gilmour brothers and Mirsky, so are in a strong position to make up the deficit.

The race committee worked relentlessly to run 22 matches after a late start due to strong winds. Monday is the last day of the event.