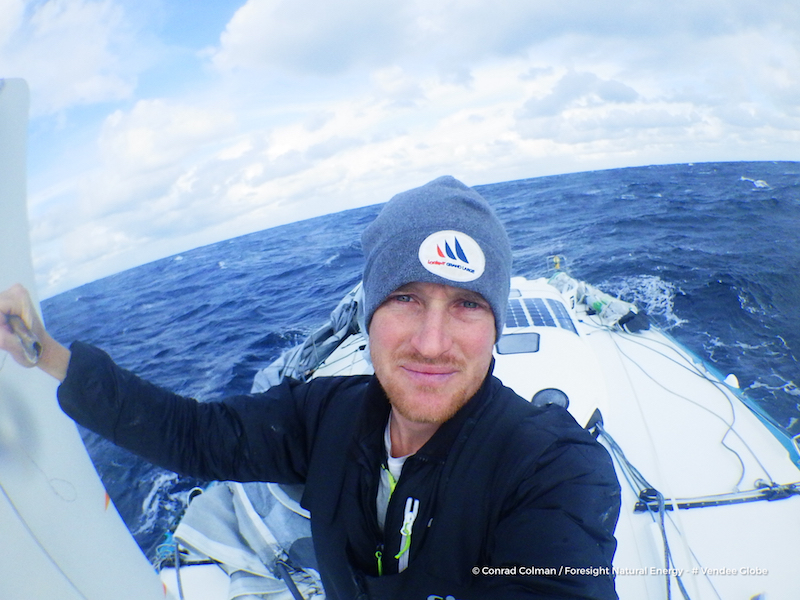 The final miles of the Vendée Globe non stop around the world race have dealt a brutal blow to New Zealand solo skipper Conrad Colman when his Foresight Natural Energy was dismasted last night (Friday) around 2200hrs UTC.

After 97 days and more than 26,500 miles racing round the world and with just over 700 nautical miles to the finish line off Les Sables d'Olonne, Colman's mast crashed down in 35-40kts of wind and big, confused seas when he was positioned 270 miles north west by west of Lisbon, Portugal. Colman was dealing with a big, active Atlantic low pressure system, his one last big hurdle before his final passage across the Bay of Biscay to Les Sables d'Olonne where he was expected to finish in tenth place on Wednesday.

This morning Colman finally had a chance to go on deck and assess his situation more fully. After last night cutting the mast, rigging and the mainsail free before they damaged the hull of his IMOCA, Colman managed to save the boom – which had suffered some damage – and his headsails. He hopes to be able to set a jury rig using the boom as a mast and some, or part, of the sails he still has. But in the first instance he must repair the boom. Colman has two days before the weather situation is forecast to change for a more favourable outlook, the potential of downwind sailing conditions on the Portuguese coast may allow him to make northwards progress. But this Saturday afternoon he was still waiting for the winds and seas to subside enough and discussing with his technical team how best to repair the boom with the materials he has. In the meantime he is also trying to minimise his electrical usage as – seeking to become the first skipper to finish the race using only renewable energies – his primary means of generation is his electric motor which requires forward motion.

Colman is reported to be extremely disappointed but very motivated to find a solution to allow him to finish his Vendée Globe. “Thanks for all the messages of support coming in from everywhere. I hope to be up to this and to be able to start towards land without assistance,” Colman messaged this morning. According to the latest weather files Colman will still have 30 to 40kts winds until Sunday afternoon and it will be late Monday or early Tuesday before the north-westerly gales back to the west and, on the Portuguese coast, rotate to a more southerly direction. “If there is anyone who you'd put your money on to do this it would be Conrad,” British ocean racer Sam Goodchild, who raced with Colman in 2011-12 on his first round the world race, said this afternoon, echoing the belief of tens of thousands of race followers who have been entranced by Colman's drive and bravery since he left Les Sables d'Olonne on November 6th. The 35 year old Kiwi had already survived a prolonged knockdown in the middle of the Pacific in a 60-70kt storm, some 2000 miles west of Cape Horn.

Eric Bellion, the French skipper of CommeUnSeulHomme, has suffered damage to his mast track in the same big storm which saw him battling squalls over 70kts during Thursday night and Friday. Bellion, best placed Vendée Globe first timer lying in ninth position, had to drop his mainsail and will have to complete his final 450 miles with three reefs in his mainsail. In 35-40kts winds, 100 nautical miles north west of Cape Finistere, Bellion told his team that he was struggling to get his mainsail hoisted again and consequently was sailing upwind under headsail only this Saturday afternoon. He is not expected to finish in Les Sables d'Olonne before Tuesday night at the earliest, facing upwind conditions for the next 48 hours at least. “I heard a strange noise from the top of the mainsail. The wind was getting up again and I decided to put back in the third reef because it was gusting to 40kts. Then I realised the top of the sail was no longer attached to the mast. These last few miles are impossible. I am not going to let this beat me,” said Bellion.

Expected on Friday at the finish line 12th placed Fabrice Amedeo is 190 miles behind Les Sables d'Olonne's Arnaud Boissières. “It will be very difficult to make miles back on Cali. There was a bit of suspense a while ago but he got a better angle than me by staying west. And so unless he has a technical problem there is no reason for me to think I can get back to him. We have had a great fight but this is his third Vendée Globe and my first. We have the same boats. I come back stronger and better and I am already very happy to be so close to him.”

In 16th place Romain Attanasio is still fighting to stay with Spanish skipper Didac Costa, despite losing a daggerboard two days ago. Attanasio told Race HQ in Les Sables d'Olonne today: “This is the third time I have hit something. The boat stopped and it was the daggerboard that took the blow. The deck and the housing are a little cracked. It is terrible to see the boat damaged like this. At this stage I am not so bothered about the loss in performance but I make a lot of leeway. The solution is to drop the keel a little more to 20 to 25 degrees. It is less powered up and we go slower. It has been a bit mad for three days with big seas but it is starting to calm down a little. As for Didac Costa, well I keep telling myself the main thing is just to finish in Les Sables d'Olonne but my instinct is to race him and to always be comparing speeds and courses. So it is frustrating right now to see him get away. I am stunned about the news of Conrad. You are always afraid something like that happens so close to the finish. I hope he can make it. My daggerboard problem pales by comparison.”

Dutch skipper Pieter Heerema crossed the Equator at 2158hrs UTC last night, back into the Northern Hemisphere, but the solo skipper of No Way Back has already had more than 24 hours of very light, drifting Doldrums conditions: “There is zero dot zero happening. There is no wind at all. There is lots of rain. There is not much to tell. I crossed the Equator at just before midnight and then just after that ran into this airbag. Everything stopped and I have hardly moved since. The whole thing about the Doldrums is the forecasting is all one big joke. As far as I can see then the Doldrums should only start about a degree from now, about another 60 miles to the north. And now, for the second day, I am in full Doldrums situation but the charts are still showing trade winds. So the forecasts are completely off. I am happy to be across the Equator. It is a step, another milestone. But I would rather be moving right now. If the end of the Doldrums is where they say it is then I will be here until Christmas.”

In Gosport, England, many boats and thousands of people turned out today to mark Alex Thomson's second place in the Vendée Globe. On the water dozens of boats joined Thomson in a Parade of Sail this morning, commencing in the Solent and travelling through Portsmouth Harbour before berthing HUGO BOSS, at the Gosport Ferry Terminal. Thomson was welcomed ashore by the Mayor of Gosport for a civic reception, as well as answering questions from the crowd of excited fans. Alex Thomson commented, “I am always overwhelmed by the support I receive from my local community, but today has been particularly special. I'm truly honoured that these crowds came out to celebrate not only my achievement, but also the work of my team both before and during the race, today is as much a day for them as it is for me and it is something none of us will ever forget.”