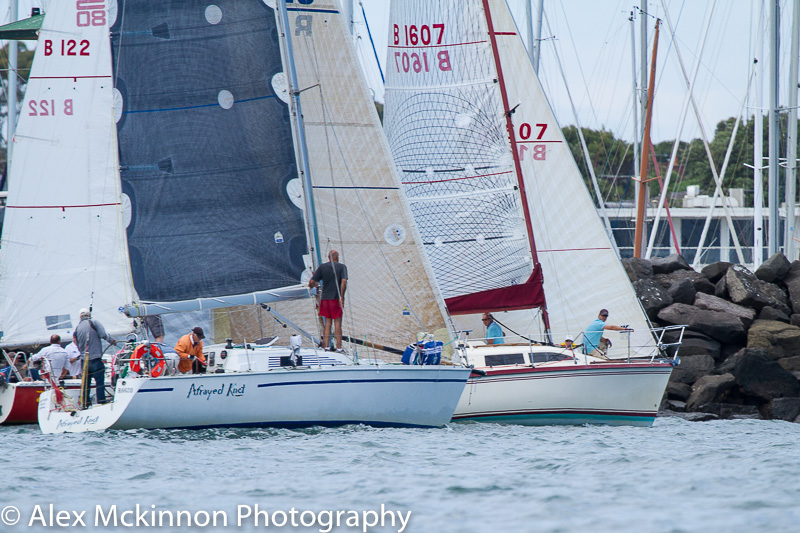 After nearly two months away from the race track the Club Marine Series was continued yesterday 11 February, 2017, with 119 registrants and hosted by the Royal Brighton Yacht Club. This decent break gave local yachts the opportunity to participate in other well-known regattas such as the Rolex Sydney Hobart Race and the Festival of Sails regatta.

A late seabreeze meant racing for Divisions 1, 2 and 3 were postponed for nearly half an hour yesterday while the Blue Division (being closer to shore) were able to kick off on time. For all divisions, racing began in a light 5 knot South- Easter and as racing and time progressed the seabreeze kicked in to a solid 12 – 15 knots.

Mike and Mark Welsh’s, ‘Wicked’, came back in full swing (after a successful Rolex Sydney to Hobart campaign) taking out a split 2nd (IRC) and 3rd (AMS) in yesterday’s race placing them in the lead for IRC now and 2nd overall in AMS. ‘Sierra Chainsaw’ has stepped up to take the lead in AMS and Phil Bedlington’s ‘BKT JAMHU’ also takes the lead in YV Handicapping.

Nick Bartel and his team on ‘Terra Firma’ join the Club Marine Series cohort after campaigning at various other regattas including the Audi Hamilton Island Race Week, the Rolex Sydney to Hobart Yacht Race and most recently the Festival of Sail where the team won IRC Division 1. They now finish off this season with the remaining Club Marine Series races,

“Unfortunately, we have been unable to compete in this series as the boat has been competing at different regattas around the east coast for the earlier part of this season.

We enjoyed (yesterdays) racing; we had to wait until the breeze filled in and was consistent enough to race but were happy when we got underway. We were fortunate to have a good start and first upwind, making gains by going further in to shore. The boat goes well in light air and once ahead we were hard to catch. IKON, Wicked and Primitive Cool all sailed well today; it was a clean race and none of the boats got too tangled up. We look forward to the last remaining races.”

As always, the strong S80 fleet in Division 3 saw tight racing for the one design boats with less than a minute of separation between their finishing times. Paul Neilson and Rodney Lagham’s ‘Moonraker’ sits a comfortable 4 points ahead of close rival, ‘Skipjack.’ Paul said,

“We were shorthanded in crew (yesterday) and unfortunately had a bad start but were lucky in picking a couple wind shifts that helped us up the course. We love racing and if we can be up there with the rest of the fleet we’re happy! ‘Imaginer’ was on fire today, they did very well in the light air and sailed a tight race, congratulations guys.”

Following closely behind is current S80 State Championship crew, ‘Skipjack’ who are currently taking the lead in Division 3 IRC by a solid 13 points.
As the seabreeze was trying to fill, the shoreline was still where most of the pressure was. Since the Blue Division’s start is adjacent to Royal Brighton Yacht Club’s marina rock wall and hence close to shore the fleet was able to begin their race on time.

Koos Theron’s ‘Xenia’ made a jump today and landed line honours bumping them up to eighth overall. Leo Cantwell’s ‘Magic Bullet’ currently sits tied with Ignazio Parolini’s ‘Republica’ for first overall. With no one boat consistently scoring top 10 results it could be anyone’s game by the end of the series.

Racing continues for the Club Marine Series later this month on the 25th February when Sandringham Yacht Club hosts Day 5.