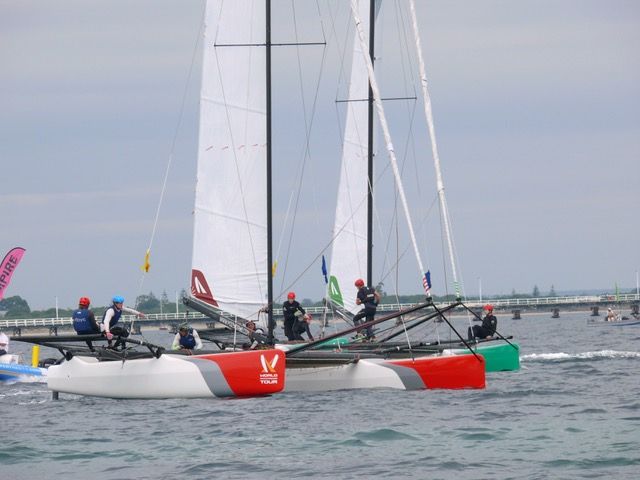 David Gilmour commented, “We were very happy that most of our racing was in the stronger winds of the first two days, because today’s fickle conditions were very difficult to handle.” He and his team only had one race today against Mans Holmberg, which they won, coming back after a poor start.

Today’s racing started promptly, with a steady but light breeze of less than 10 knots, but this faded out after a couple of hours, making the race committee’s job very difficult. By sheer perseverance and some swift course adjustments they managed to complete the round robin, and get a fair result.

Despite the light and shifty winds there were a few moments of drama during the day, with Olympic silver medallist Olivia Price, sailing with Evan Walker, falling overboard during a gybe. Some strong swimming and quick crew work got her back on board without losing the lead. The last time she abandoned ship was in the final of the women’s match racing at the 2012 Olympics in England.

Torvar Mirsky just missed out of qualifying, finishing third, having been level with Jerwood on seven points, but losing second place on a countback. First overseas entry was Sweden’s Mans Holmberg who finished fourth, beating Sydney’s Evan Walker on a countback.

The next event on the World Match Racing Tour is the Perth Match Cup, another Tour level event from 16th to 18th March, followed immediately by championship level event Match Cup Australia, with both events hosted by the Royal Freshwater Bay Yacht Club on the Swan River.