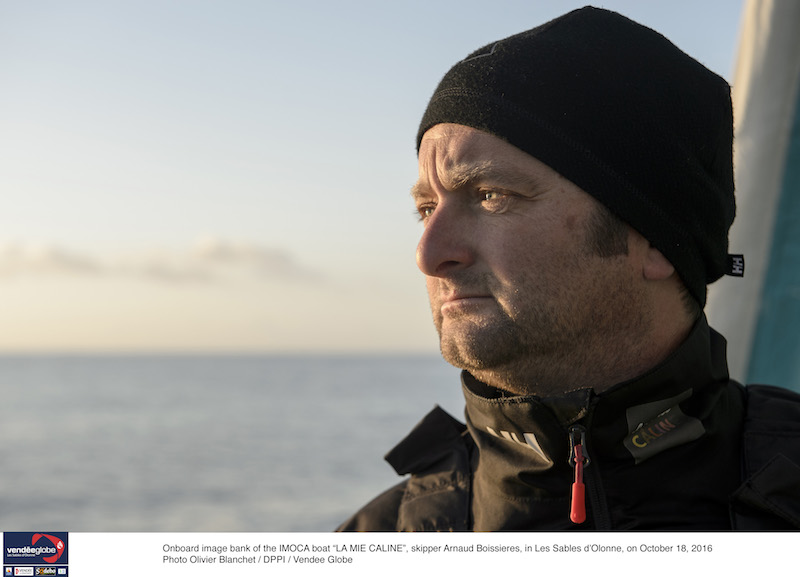 After the arrival last night of Eric Bellion, the French skipper who finished in ninth place and top 'rookie', Les Sables d'Olonne on the west coast of France prepares to welcome back their favourite adopted son, Arnaud Boissières who is now due to finish into his own home marina on Thursday evening or first thing on Friday.

The solo skipper of La Mie Câline, who grew up in Arcachon, south-west of Bordeaux, but moved to Les Sables d'Olonne, will equal the record of Armel Le Cléac'h as the only two skippers to have finished three back-to-back Vendée Globe races.

Boissières, 44, cherishes childhood memories of Vendée Globe finishes and lives in the La Chaume area of Les Sables d'Olonne, not far from the legendary ‘canal'. Yesterday, as he climbed northwards up with Portuguese coast, racing downwind in favourable breezes, he passed the latitude of the stricken Conrad Colman and so now holds tenth place with around 450 miles to the finish line. Expected to finish around 24 hours later is the rival he match raced from the Pacific, journalist turned ocean racer Fabric Amedeo.

Conrad Colman is reported to be taking time and care to ensure the jury rig he sets on Foresight Natural Energy is right first time and as efficient as he can make it. This morning he reported that he had completed the repairs to his boom and had appropriate supporting rigging in place. The former sailmaker was cutting and shaping part of his mainsail but did not anticipate stepping and setting the rig until all the component parts were in place. He is reported to have worked through as much of last night as he could.

The weather forecast is in his favour in the meantime with downwind conditions until Friday before a ridge of high pressure extends SW to NE across the Bay of Biscay which would mean even slower progress.

That high pressure zone will likely affect the youngest skipper in the race who sees his ETA slip to Sunday. Alan Roura on La Fabrique commented today: “It's horrible. Yesterday when I looked I thought it was going to be Saturday morning. If I do well, I'm now looking at Sunday morning. It's long. The weather has been unpleasant since Cape Horn. On the one hand I'm thinking of the finish, but on the other I'm trying to put it to one side, as there are so many complications. It's incredible to be here with this boat. The race isn't over, so I need to remain focused until the finish.

“I'm proud to have been through all this with the boat. I'm still eating well. I brought enough for 120 days. In the south I didn't need to dive into the reserves. But now there aren't any sweets or chocolate left. Thanks for reminding me it is Valentine's Day. My girlfriend will have my present this weekend. She doesn't want flowers, but is waiting for me.”

Rich Wilson, the skipper of Great American, still sees a complicated weather pattern for his approach to the Bay of Biscay, but is now expected between the 20th and 21st February. It is still not clear how a low pressure system generated off the NE coast of the North America will evolve mid Atlantic. It appears to stall and so how much he will be able to use the favourable downwind and reaching conditions is not entirely clear.

Didac Costa has been taking advantage of the light winds to try and repair some of his downwind and reaching sails in order to augment his very limited sail choice. “When I was trapped in a high pressure I took the chance to repair the FR0 (Fractional Code Zero) first. This sail had suffered a lot in the passage of the Doldrums and I knew there were a couple of holes, but I had not seen a cut of 5 meters in its upper part when I hoisted it at night. As I have not the required materials for such a repair and due to the greater need for a relatively small sail for the North Atlantic lows, I decided to try to repair a sail that I broke before passing Cape Horn: the MDTK (blast reacher), that has plenty of cuts and delamination.

“I had to try, even if I only can use it for a few hours before finally it gives up. I used almost all the material left on board to repair sails: cuben fibre cloth, Dr. Sails, sikaflex, everything and after 10 hours of work I hoisted the sail to furl it properly and then I discovered a new cut in the foot of it. It was dark and I had no strength enough to lower it again so I hung myself with my harness and put a last patch juggling with the sail. I did what I could. We will see how long it will last.”