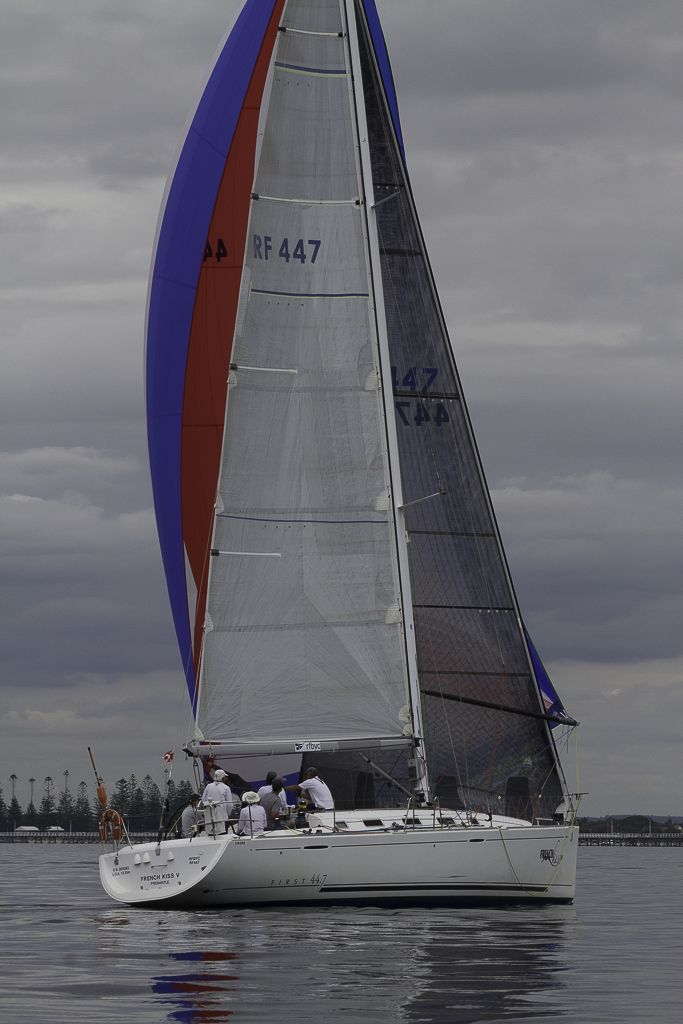 Ross McLaren’s Beneteau 44.7 French Kiss held on grimly to finish second over the line and fifth on handicap to sit at the top of the points table. Photo Bernie Kaaks.

The weather turned from gutbusters to doldrums overnight. The 20 knot easterlies of the past two days were replaced by a ghoster at barely 3 knots by midday but worse was to come as a heavy fog drifted over the Bay, obscuring even the mighty Queen Mary 2 which anchored offshore for the day. After the fog came the rain, thoroughly drenching crews while the breeze dropped from light to non-existent.

The M32 match racing fleet somehow struggled through the whole of its round robin program but was forced to abandon the finals (see separate report by John Roberson). Two keelboat fleets struggled all day on the windward and return course but eventually managed to complete three races for the afternoon, while cruising fleets sailed a short passage race which was mercifully shortened by the race committee near the midpoint.

The grey skies did little to dampen the spirits of sailors however and the mood back at the Port Geographe bar was buoyant.

David Clifton’s Thirsty Work led the cruising fleet all day, but was hard pressed by Ross McLaren’s Beneteau 44.7 French Kiss V, which was barely 200 metres behind at the finish. Jim Merton’s Cole32 Omega, sporting a suit of home built sails, handled the conditions well to win handicap honours, with Beluga and Fidra filling the minor places. The decision to shorten the race was widely supported since most yachts would have failed to meet the time limit had the race gone the full distance. As it was, the tailenders returned to the marina in near darkness.

Gary Griffiths again claimed fastest time in the Jib and Main division sailing Heaven Can Wait, but was beaten for handicap honours by Lady Liza. These two now share the overall lead at this early stage.

There were a few heart stopping moments on the windward and return course. Light winds made mark roundings challenging and with the number of yacht sporting bowsprits now, there were some very near misses and more than a few raised voices.

In the Vipers series Rod Beurteaux’s You Get in the Bowl has now established a clear lead after six races with a score of 10 points, ahead of Mike Navarro’s Fizz on 15. The Viper class is gaining ground in the West and should attract even more attention next February when WA hosts the Viper World Championship at the South of Perth Yacht Club on the Swan River. The class has already attracted a number of the State’s dinghy champions.

Premier Cruising Division, designed for skippers who like to race but prefer to avoid windward and return races, had to put their prejudices aside and sail on the short course today in some of the most difficult conditions, with heavy rain and light, variable winds proving a real challenge. “Now you can understand why we don’t like windward-leeward races,” one skipper was heard to grumble at the bar at the end of the day.

Local yachtsman Ken Waller sailed his Flying Tiger Let’s Dance well in all three races for a total score of just 7 points, followed by Michael Cameron’s Easy Tiger (a sister to Let’s Dance) with 11 points and Doug Lawler’s Twist-n-Shout with 13 points, making it a trifecta for country based sailors.

IRC results show Denys Pearce at the top of the table with two firsts and a second for just 4 points from 3 races, with Laurie Flynne’s Dynamic second with 7 points.

Better news for day 3 – sunny skies and light breezes should persist all day to dry out the soggy sails from day 2 in the regatta’s Long Race, starting early in the morning and lasting most of the day.