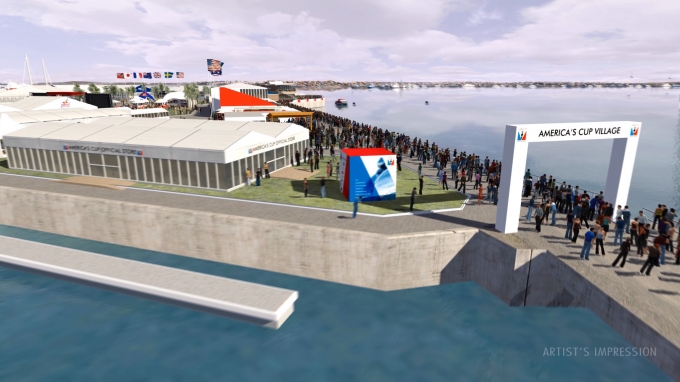 Right across the beautiful island of Bermuda, preparations continue apace for the incredible events that will unfold, with racing taking place on the Great Sound, the stadium-style setting for the racecourse that will play host to the fastest boats in America’s Cup history, raced by the greatest sailors in the world.

“When you see the progress that’s being made every day at the America’s Cup Village site in Dockyard, it’s now possible to visualize how the final village will look. We’ve started construction of our largest and most premium hospitality structure and we’ve released a video flythrough which you can see here which is a simulation of what the racecourse and the America’s Cup Village will look like, and that just serves to increase the anticipation and excitement even more.

“Another sign of how close we are to the start of the action is the launching of the America’s Cup Class (ACC) boats the teams will race in May and June. The step forward that these boats will have, in performance terms, is incredible.
Races that, in past America’s Cup events, took hours, will now be played out in around 22 minutes.

“Incredibly the boats will perform at least the same number of maneuvers within this time, meaning this new format will place a premium on crew fitness and making accurate tactical decisions within this much more limited time frame.

“In the right conditions, the boats will most likely stay up on their foils for the entire race, which is going to produce fast moving racing for everyone watching at the venue, as well as the millions of people watching on TV and on the internet.

“As with all match racing, the start will be very important, as will the positioning and having smooth, well coordinated tacks and gybes. It’s going to be fascinating to see which teams will eventually qualify for the final races.

“Finally I want to touch on the America’s Cup Endeavour Program. This is an incredibly important part of the America’s Cup, using sailing to inspire and educate thousands of young Bermudians and around the world, and making sure that we create a positive lasting legacy. We have just seen two young Bermudian sailors, Ahzai Smith and Christopher Raymond, winning in the Gold and Silver Fleet races in the O’Pen Bic National Championships in New Zealand, and I can tell you from first hand experience that those young sailors achieved something incredibly special. Those boys are shining examples of what the America’s Cup Endeavour Program aims to achieve – creating opportunities that its participants had surely never dreamt of, and then helping them grab that chance and achieve more than they thought they could.

“The America’s Cup Endeavour Program would not exist without the support and help of a number of important partners, and the America’s Cup and all the events around it could not happen without the hard work, drive and determination of thousands of people, in Bermuda and worldwide. However, all this work is being done to create the greatest race on water, and now, just 100 days until it starts, it is all becoming very real. The countdown continues!”