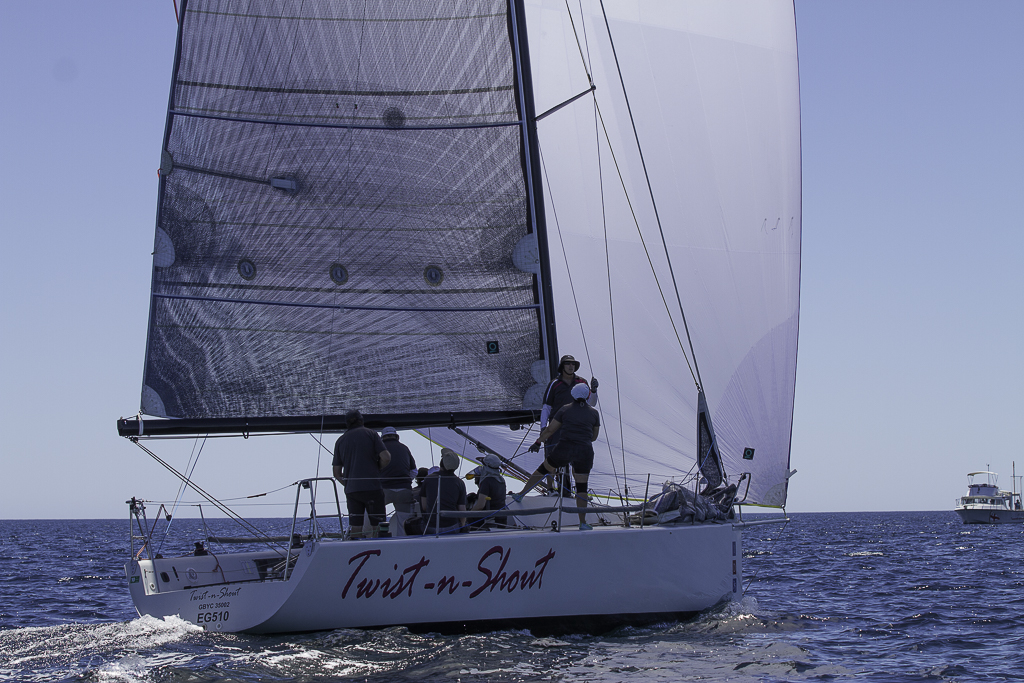 Local boats from Bunbury and Busselton took more than their fair share of pennants after today’s racing and several also starred in the race for line honours.

Doug Lawler’s DK35 Twist-n-Shout was untouchable in the division 3 fleet to scorch around the course for a comfortable win by three minutes from Tony Carter’s First 40, Just Cruisin and Michael Peel’s Secret Mens Business. Ken Waller’s Flying Tiger Let’s Dance started well and was still second only to Twist-n-Shout at the third mark of the course. He was eventually swamped by the bigger boats in the fleet but still finished a creditable fifth over the line. Handicap favoured the little boats, however. Gil Sowden’s Empty Pockets won the race from Clint Hayes’ Stellar Leap and Nuzulu, jointly sailed by Jaye Martin and John Palmer. Two country yachts share the lead on the points table – Albany based Flying Tiger, sailed by Michael Cameron is currently tied on 19 points with the Busselton yacht Electric Tram, sailed by Barry Brown.

David Clifton’s Swarbrick 12.2 Thirsty Work once again bolted away from the fleet to record line honours, but the handicapper has the boat’s measure and it placed ninth, victory going to a new Busselton yacht, Satchmo, owned and sailed by local optometrist Nigel Chesterfield-Evans, who only purchased the Hanse 41 in Melbourne last September. Tilt, sailed by Geoff Salter and Dave Godfrey was second and Aida third. Progress scores with one race to go have Fidra in the lead with 8 points, ahead of Ross McLaren’s French Kiss V with 10 points.

Denys Pearce’s By and Large continued its domination of the IRC fleet to add another first place to her impressive tally. The S&S34 Huckleberry performed well to take second place with Laurie Flynne’s Beneteau 34.7 Dynamic third. By and Large now leads Dynamic with 5 points to Dynamic’s 9 and will be very difficult to beat from there.

Tony Mills’ Lady Liza is still a step ahead of the handicapper, notching another win today ahead of Jean-Philippe Hanriot’s little French Kiss and Ken Waller’s Leonie third. Lady Liza now leads the points score for her division by two points from Gary Griffiths’ Heaven Can Wait.

Full results are available at http://www.rpyc.com.au/sailing/regattas/2-page/538-gbrw-2017.