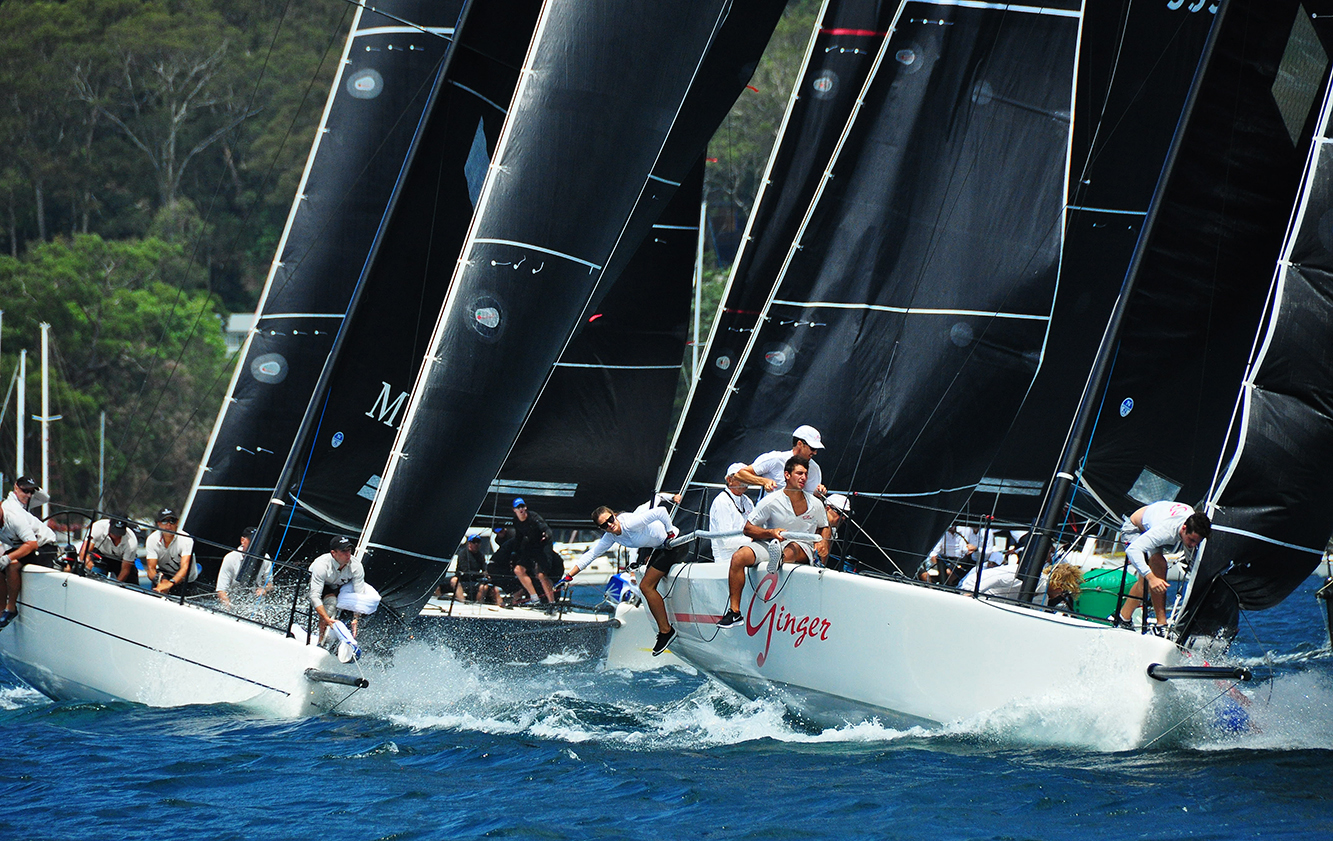 Ginger leads the fleet after day one of the Australian Championship. Photo Bob Fowler

A changeable opening day of the 2017 MC38 Australian Championship began in pleasant summer nor’easters only to be cut short just before a violent storm cell crossed over Sydney’s northern beaches bringing high winds and hail and causing flooding at the host Royal Prince Alfred Yacht Club.

Three races in mostly warm breezes NE 7 – 11 knots and a 2,2,1 scorecard yielded Leslie Green’s Ginger the North Sails boat of the day flag on Friday February 17, followed in the pre-protest series pointscore by Vino and Hooligan.

Over the course of the day on a clear Pittwater race track, various crews deemed there were enough infringements, plus one collision, to warrant five protests being lodged at the RPAYC, which reordered the top placings. Maserati (Neville Crichton) moved into second on 11 points and Hooligan (Marcus Blackmore) into third, propped up by their opening race win, on 12 points.

The feistiness metre clicked straight to high when Ross Hennessy’s Ghost Rider (RPAYC) and Howard Spencer’s Menace from New Zealand came together in a port/starboard collision in the opening stages of race one, the clip of Ghost Rider’s stern by Menace causing enough damage to send the former ashore for hasty repairs.

Hennessy’s team retired from race one, missed race two and made it back just in time for race three thanks to the quick application of carbon to the damaged areas by tactician Gerard Smith and a postponement by the race committee as the approaching storm tugged the breeze around the north-east quarter. “We’ll try and stay out of trouble on Saturday,” Hennessy assured.

In the protest room both MC38s were disqualified from race one, Ghost Rider for not keeping clear of the starboard tacker and Menace for taking evasive action but not avoiding contact.

Another MC38 crew aiming to stay out of strife on day two is Vino. With champion Laser sailor Glenn Bourke on the helm of Chris Hancock’s Vino they managed to rattle a few teams. Two race disqualifications later Vino was languishing points-wise with a big fight-back required if Hancock and his crew are going to rise up again at this three-day national title.

One of the day’s high points was when Steve Barlow’s Light Speed, a new team making their MC38 debut at the premier level, did a ‘Steve Bradbury’ and finished second in race three. “We are a happy boat; I think the only other boat that is happy is Ginger,” Barlow said, making reference to the multiple disqualifications. “We hadn’t even lined up with another boat and had no idea how competitive we were going to be with our rig and sail settings,” the jovial skipper added.

In good humour one of Barlow’s crew posted on social media an image of the rank outsider Bradbury skating through the fallen pack at the 2002 Winter Olympics to take out the gold medal.

The RPAYC’s jurors were kept busy hearing protests from 4pm until around 9pm on Friday evening. The class usually employs on-water judges to pass judgement at the time of any incidents however none were available for the championship.

Musto donated prizes for the RPAYC race committee to hand out at their discretion and in the first round Light Speed was awarded for their second place.

Saturday’s forecast is for south to south-westerly winds 15-20 knots tending south to south-easterly 10-15 knots during the morning and early afternoon. There is an 80% chance of showers during the afternoon. Race four of the MC38 Australian Championship is due to start at 1100hrs on what is scheduled to be a hectic Saturday on Pittwater.