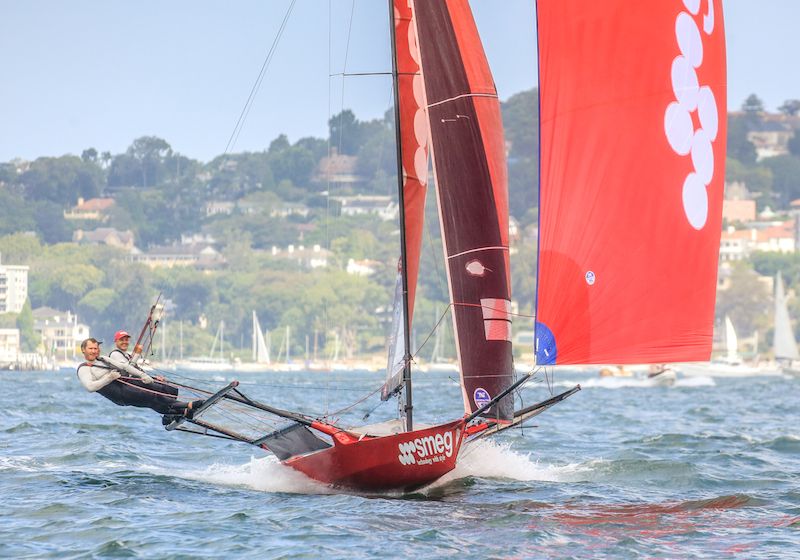 The closeness of the 2016 championship and the likely improvement in a few of last year’s rookie teams, indicates the 2017 championship will be just as tough to win as Smeg’s victory was just twelve months ago.

Smeg will be going into the regatta with the same experienced team (Lee Knapton, Mike McKensey, Ricky Bridge) which was able to withstand some very strong challenges. Good early season form, including a victory in the 2016-2017 NSW Championship series, has assured the team favouritism for a successful defence in the JJ Giltinan Championship.

Smeg’s mainsheet hand Ricky Bridge is optimistic about the team’s chances of retaining the title but is aware of the talented challengers they will face over the seven-race championship: “This will be our third season as a crew which always helps when the pressure is on in the big races. To a large extent we remain unchanged from last year.

“I think this year’s JJs will be another tight contest, the speed differential between the boats is extremely close and it really comes down to the day and how each team sails their boat and handles the conditions. We are excited about the JJs and trying to defend our title. We realise it’s not going to be easy but look forward to the challenge.”

There is no doubt, appliancesonline.com.au (David Witt, Tom Anderson, Tom Clout) is the most likely threat to Smeg’s attempt to retain the title, and skipper David Witt makes it clear that the team has done “what was necessary” to cover the gap at the 2016 championship.

“We were more than competitive with our #2 rig last year but we had problems with the big rig which was not competitive enough against the top end of the fleet. It was essential that we needed a completely new #1 rig if we wanted to give ourselves every chance in such a competitive fleet.”

While Smeg and appliancesonline.com.au will start as the two most favoured teams, complacency won’t be a problem as New Zealand’s David McDiarmid and his Yamaha team are coming back for another challenge.

David is making no rash predictions about his team’s chances at the 2017 championship: “Last year was an outstanding performance and we caught a few people off guard. We knew we had it in us but it was still pleasing to put the performance together. Unfortunately, this year has not gone to plan and we will have to rely on last year’s form a bit. We’ve had a very poor build up this season with many distractions. We’ve only recently got the same three crew together again and will be running the same set up as last year.”

Michael Coxon has won Giltinan Championships in 2006 (Casio Seapathfinder) and 2007 (Fiat) but is never one to talk up his team’s chances before a regatta. Michael, Trent Barnabas and Dave O’Connor are a strong team representing Thurlow Fisher Lawyers, and although conservative in their comments, the three members of the team are all winners and have confidence in their obvious talents.

Michael Coxon said: “Our team has been together now for three seasons and we all combine well when we are under pressure. All the top teams do this as well so it will be up to us to be more consistent over the variety of conditions we are likely to get in the seven races. We have a boat with good speed and very good sails. Now it’s up to us to get the maximum out of the equipment with our ability when the chips are down.”

Thurlow Fisher Lawyers showed the strength of the team’s challenge by winning the recent Australian Championship on count back after the scores were tied with Smeg.

The young Noakes Youth team of Ash Rooklyn, Rhys Mara and Ben Robinson will be one to watch as they take on the world’s best 18ft Skiff teams. In their rookie season, the talented team scored two 3rd placings late in the 2016 JJ regatta. It finished 7th overall in the 30-boat fleet.

Skipper Ash Rooklyn says the team is looking forward to the challenge but is not over-confident as he realises the task is a tough one. “We didn’t have too many expectations going into last year’s JJ because we knew the quality of the teams we were competing against. Our aim was to sail consistently and hopefully enjoy the experience. It was a bonus when we came away with two podium finishes and a 7th place overall in the championship. This season we have the same mindset as last year and are trying not to put too much pressure on ourselves.

“If we go out with the attitude to enjoy ourselves and be as consistent as we can be then hopefully good results will come. Our boat speed is good so now it’s up to us to put it all together when it counts. Sean Langman and Noakes support has been fantastic. They have made the whole thing possible.”

An interesting team at the championship is the Asko Appliances team in the skiff which previously won the championship as Gotta Love It 7. Skipper, Marcus Ashley-Jones has been a JJ race winner on a number of occasions over recent seasons and this year has the added experience of eight times Giltinan champion Seve Jarvin on the mainsheet, and talented young Jeronimo Harrison in the bow.

Marcus is confident it will all come together when the regatta begins: “We will be putting in the necessary work in the lead up to the championship and will also rely on our experience when the racing begins. We realise how good the teams are at the top end of the fleet but we feel we can match it with anyone if we perform to our potential.”

There is a great depth to the fleet this year with many teams capable of race wins during the championship. The local fleet has Coopers 62-Rag & Famish Hotel (Jack Macartney), Compassmarkets.com (Keagan York), Yandoo (John Winning), The Kitchen Maker (Stephen Quigley), De’Longhi (Simon Nearn) and Line 7 (Jonathan Whitty).

Two other internationals with great credentials are former Giltinan champion Howie Hamlin (USA) and Jarrod Simpson (UK). Hamlin returns after missing last year’s championship with illness. He will skipper Harken and has a very experienced team with him. Simpson will skipper a brand new skiff recently built by Van Munster Boats and also has a top team with him for this regatta.

The Danish team of Flemming Clausen, Soren Clausen and Jesper Broendum also return for another crack at the JJs. This time the team has chartered the New Zealand skiff Events Clothing for their challenge.

The 2017 JJ Giltinan Championship will be sailed from 25 February to 5 March.

A spectator ferry will follow each of the seven races in the championship, leaving Double Bay Public Wharf alongside the clubhouse, at 2.30pm on each race day.

All races will be streamed live to enable everyone to follow the entire championship on the computer or other smart device from anywhere in the world.