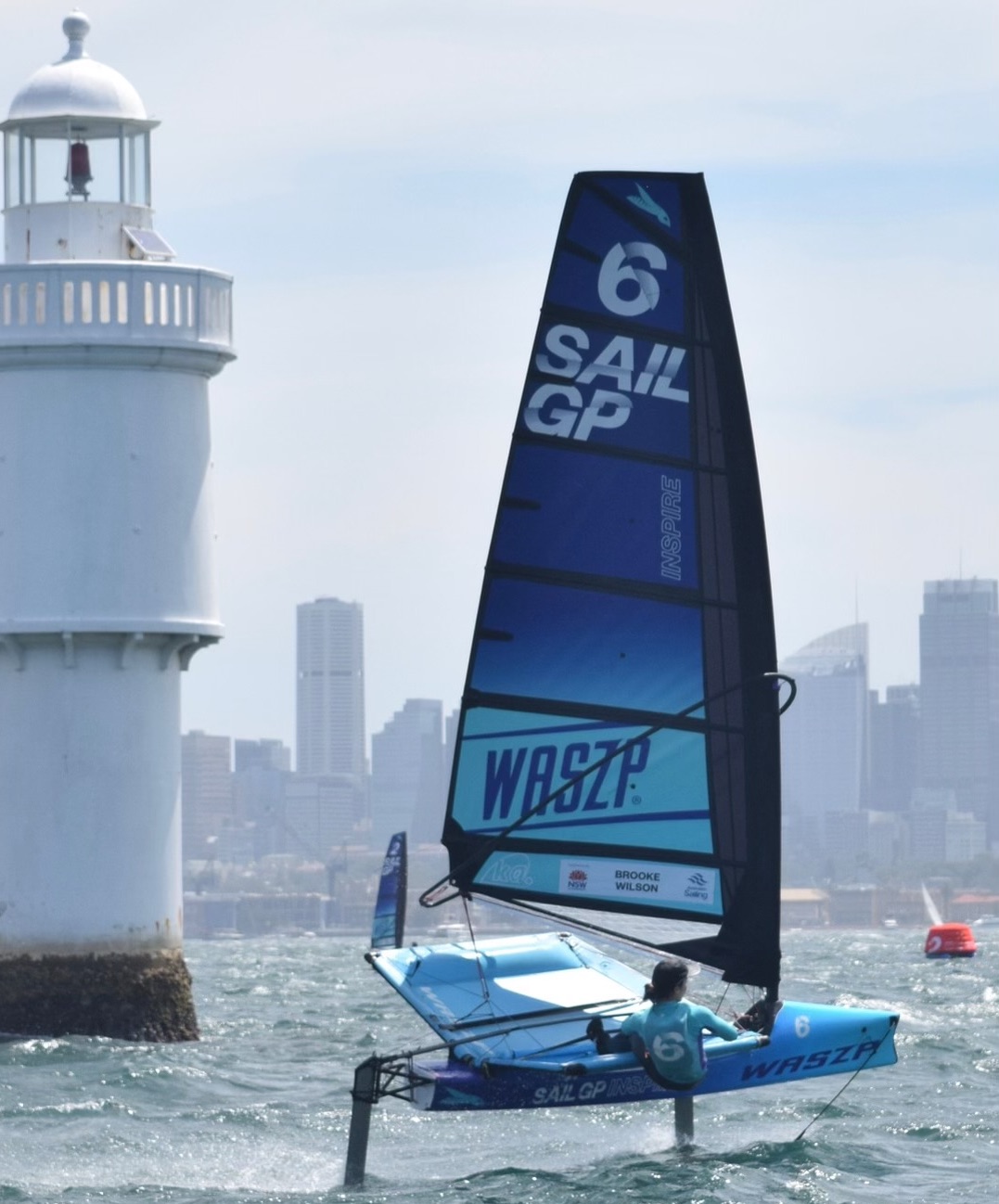 Moving from Laser sailing to foiling on a Waszp is a considerable leap, more so if you transition from one to the other after two days of training.

That’s what happened to Laser Radial sailor Brooke Wilson. In December, the 18 year old from Sydney’s Northern Beaches got the chance to race in the Wazsp class, a one-design foiling dinghy, against 15 other sailors on Sydney Harbour.

The event was part of the Inspire Racing X Waszp program that ran in conjunction with the Australia Sail Grand Prix (SailGP) from December 11-12.

The program introduces young sailors from all walks of life to the world of foiling, and ultimately sets them up for a bright future in sailing, potentially as F50 sailors.

Wilson applied for SailGP Inspire, encouraged by a former coach. She submitted her application just before the deadline.

It’s lucky she did because she was the first female finisher in the event.

As a result of that win, Wilson and fellow youth sailor Jack Ferguson (first place overall), are off to the San Francisco Waszp Grand Final – Championship of Champions.

The Australians will race against 14 other SailGP Inspire sailors from each F50 nation and most host nations – USA, France, Japan, New Zealand, the Netherlands, Great Britain and Spain.

The event coincides with the United States SailGP Season 2 final from March 26-27.

Wilson, a first-year Bachelor of Medical Science student at UTS, was over the moon when she and Ferguson received the news of their selection at the awards ceremony at Barangaroo, Sydney, in December.

“We were jumping up and down, squealing like girls. It was really amazing,” Wilson said.

She competed against seven female sailors and eight male sailors from across NSW. Forty per cent of the fleet were new to foiling.

Although conditions were challenging, with north-easterly wind gusts up to 25 knots, Wilson said she had an absolute blast sailing on a course beside the F50 event, won by Australia with Tom Slingsby at the helm.

“Coming from a Laser Radial, the Waszp is definitely a lot faster,” Wilson said.

“I got up on the foils the first time and I had no idea how to stop. [It felt] so out of control. But I kind of got the hang of it. Flying above the water, everything feels so smooth.”

At the Sydney event, the Inspire sailors got to meet F50 sailors, including Australian Olympic Gold medallist and America’s Cup sailor Nathan Outteridge from Team Japan and Olympic Silver medallist Nina Curtis. Curtis joined the Australian team in 2021 after SailGP made it mandatory for each crew to have at least one female member on board for racing.

“Sailing alongside the F50s, going to team base, it was so inspirational. Seeing Nina talk – it made me hungry for the future,” Wilson said.

“And going against all the boys, who all had [prior experience on] their own Waszps in Sydney, was also pretty cool.”

Wilson started sailing an Optimist at Bayview Yacht Racing Association at Pittwater at the age of eight in 2011. She progressed to Laser 4.7s and then to Laser Radials, which she sails out of Middle Harbour. Wilson is a training partner with the Australian Sailing Team Laser squad. Her long-term goal is to qualify for the Olympic Games in the Laser Radial.

She has competed overseas in Sri Lanka, Greece and Poland. In August she will travel to Portugal for the under 21 ILCA Worlds. And in October she goes to China for the Worlds.

This will be Wilson’s first experience of sailing on San Francisco Bay. She is looking forward to the challenges that will be presented to her, such as strong winds and tides, and to seeing the Golden Gate Bridge, and the F50s in action.

There is an equal number of females to males in the fleet which, Wilson said, is a step in the right direction.

In the future Wilson would like to sail in the F50, after being inspired by Curtis and the other female F50 sailors at Australia SailGP.

As part of the Inspire experience, Wilson and Ferguson get to spend a day with Curtis and the Australia SailGP Team in San Francisco where they will learn about boat set-up, data analysis, team meetings and media interaction.

The overall male and female winners from the SailGP Inspire event will receive a cash prize to go towards future sailing endeavours and join a “SailGP team’s training and tech sessions at a Season 3 event, including a chance to sail on board the F50”.

Wilson said she “can’t wait to get back in a Waszp” and train for the event. Although she is only new to the class, she plans to go in with all guns blazing in an attempt to win the female prize in the USA.