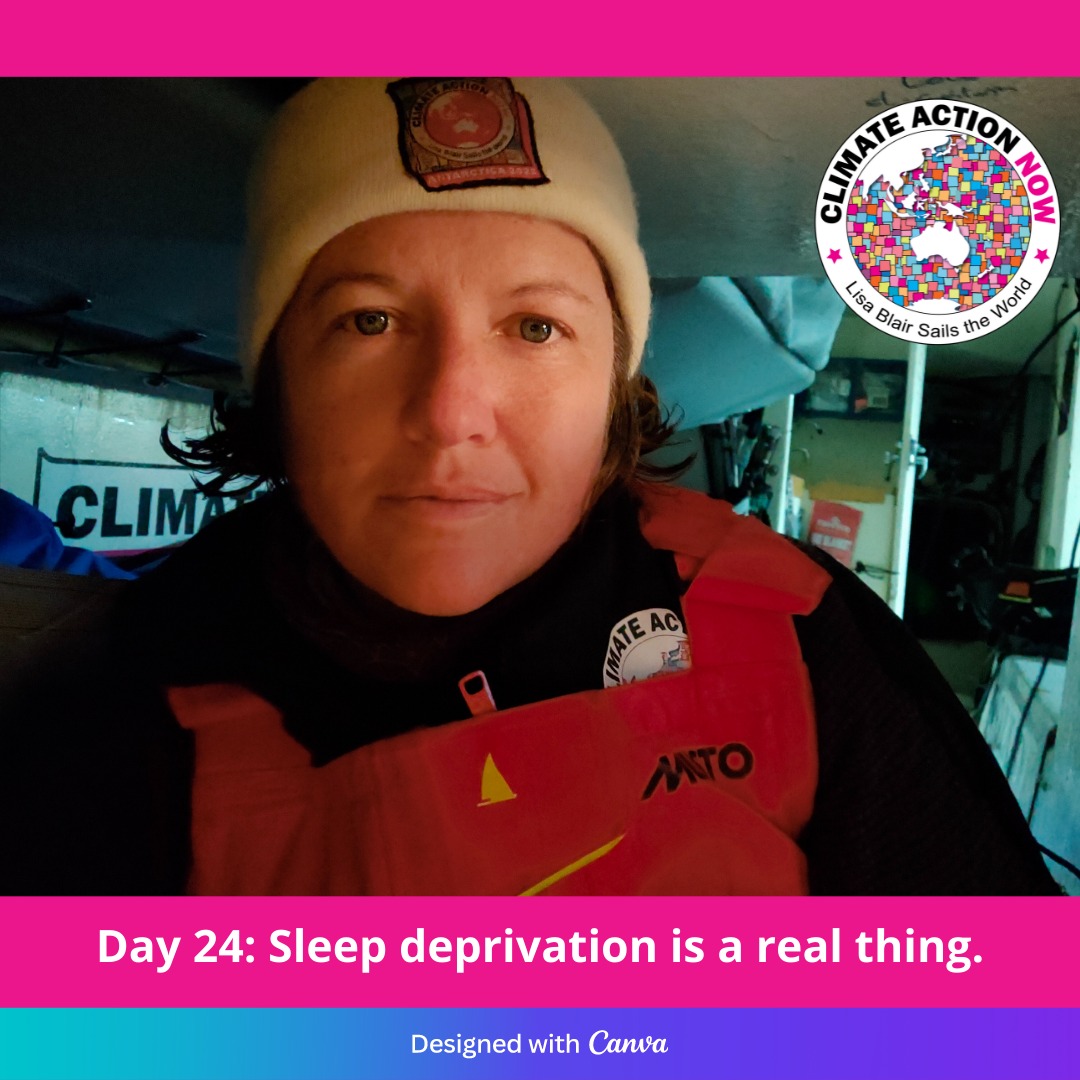 In her latest blog post, Blair struggles to get an uninterrupted sleep in changing wind conditions.

Try as I might, a good night’s rest remains elusive.  Last night I was really striving for an earlier night but I was struggling to get a clear signal out from the boat for the satellites to pick up and so I found myself only just wrapping up the blog at 3am.

By the time I had heated my hot water bottle, brushed my teeth and done the general pre-sleep checks it was closer to 4am.  All day the winds had been keeping to mostly 25 knots and the swell, while a large 5.5 metres wasn’t that rough as there wasn’t enough wind to drive it to break.

It was like the weather gods were having a laugh with me because not 10 minutes after lights out, just as I was fading to sleep, we were suddenly getting 35 knots of wind gusting all the way up to 47 knots.  This was more than strong enough to start breaking the swell and suddenly my night went from a rollie but calmer sleep to a brace while trying to sleep…

There wasn’t too much that I could do about the swell and the impacts that we were getting so I continued to attempt to sleep and set the auto pilot up to drive on the wind angle at 150 T because the wind was changing from the W to a SW and I didn’t want to accidently miss a quick shift.  By selecting wind on the B & G auto pilot it will steer to a programmed wind angle and when the wind shifts so will your course to maintain that wind angle.

I was attempting to sleep in my normal bunk which happened to be on the high side as we were on a port tack (winds coming over the port or left side of the boat so we are leaning to the right), so I was mostly laying against the lee cloth to stay in the bed.  There was about three hours where the seas became brutal and while I was able to lightly nap in between I was needing to keep my hands free of the sleeping bag so I could brace against the bunk above me or against the lee cloth when we were struck with a rather large wave.

It wasn’t until after 8am that I was able to finally succumb to sleep because the winds had eased enough to make the sailing slightly smoother.

The winds continued to ease and quite quickly were rolling around in a large swell going five knots, just enough to wake me.  At 11am I noticed the winds had also backed all the way around to the South and because I was sailing a wind angle it meant that I was now unintentionally sailing Climate Action Now on a norther course, not at all where I wanted to go.  I had managed three hours of broken sleep, so it was with a great difficulty that I dragged myself out of bed.

On deck I made an assessment and decided to gybe while I only had a small amount of main sail up and then look at shaking out the reefs in the main sail.  I was currently set with three reefs.  By the time I had completed the gybe I hadn’t seen anything over 23 knots and the average winds were at 15 knots, so I decided to at least shake out the reef 3 to reef 1. This requires me to winch the whole of the sail up until I hit the first tuck down point, or reef one, and then it is just a matter of tuning the set up.

I must be building up some extra muscle with all the sail changes because it wasn’t as hard to shake out two reefs at a time as it was in the beginning, but I did notice that my recovery time was a lot longer and is likely due to my fatigued state. I had stood on deck and ummed and ahhed for almost an hour afterwards about the need of putting up the full mainsail.

But something in me said to leave it as is for a little while longer, the weather is very unpredictable down here with squalls (localised storms) as a regular occurrence.  I am very glad I did as the winds built up to 25 knots about 10 minutes after I had tidied up and gone below back into the cabin.

The rest of the day was rather uneventful, the winds ranged anywhere from 13 knots to 30 knots and everything in between. But because the winds were lighter the swell was smoother and we weren’t suffering any knock downs. I managed to get another few hours in bed and before I knew it, evening was here.

At midnight the winds blasted with 30 knots through a squall, and I was now sailing with one reef in the main sail and the no 2 Jib out. I really didn’t want to sail with the whole of the no 1 Jib out in that much wind and as I still had the storm jib out, I decided to furl away the other jib.

I thought that this was going to be a short-lived storm, but rather than passing on, it stayed. It seemed that the winds were now mostly between 25 and 30 knots reaching 35 knots in the gusts.  When we started to nudge up towards 35 knots it was time to put the second reef in the main sail. Remember that the air is denser here so 35 knots like equivalent to 50-60 knots in Sydney.

Now there is bursts of wind reaching 47 knots at times and always accompanied with sheeting rain. The swell has also once again deteriorated with the increased winds, so we are starting to get some knock downs again.  One was so violent that the lids on my food cupboard was knocked off with the tins and glasses inside trying to escape.  We must have had the mast in the water and been over more than 90 degrees for that to happen.

Climate Action Now is handling it all with grace as usual so I am not too worried, it just makes life a little difficult and sleep hard to come by. But aside from that things are all going well.

As usual I would like to take the opportunity to thank the following degree sponsors.

160 W – Thank you so much to Jeff Moule from Allsafe Insurance Brokers. Your support is very appreciated.