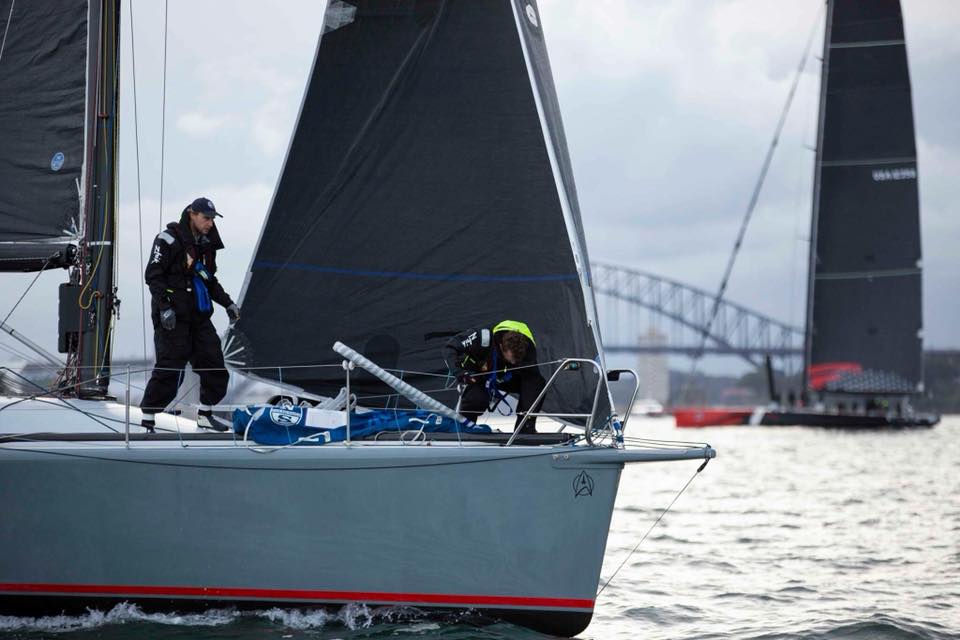 It was a forlorn Anthony “Captain” Kirke who arrived at Geographe Bay Race Week in February 2017. The plan had been for his Farr 40 “Enterprise” to sail in IRC Racing Division. The entry was paid up, the crew was organised, the accommodation was booked. But the boat sat in its pen at Fremantle Sailing Club, its carbon mast in jagged pieces after a D2 shroud parted during the delivery race.

But rather than wallow in self-pity, the resilient Kirke and two of his crew entered the J/70 “Jedi” (re-christened “Mini-prise” for the event) and went racing. During the week, Kirke saw an opportunity and hatched a plan. Rather than replacing the mast with a standard Farr 40 One Design rig (a twenty-year-old design), there was an opportunity to upgrade to a more modern stick – lighter and stiffer.

And why not set the souped-up Enterprise for the 2018 Sydney-Hobart? Might as well do some other races and regattas while the boat is in the East. As a senior executive with Fortescue Metals Group, Kirke is a big thinker. Lots of zeroes.

The plan was simple – do the CYCA Blue Water Point Score races as a Hobart warm-up to get the boat and crew sorted. The crew? An interesting bunch – a blend of youth and experience, according to the Captain. Long-term work colleague, crewman and co-owner Andrew Nuttman; Jack Chaston, an ambitious mining engineer and veteran of two Hobarts as a young bloke on Knee Deep; Will Koolhof, a Hobart native, another engineer and a brave, fastidious bowman; Máire Connolly, a fearless Irish nurse, pit specialist and medical officer; Michael Hughes, “the Great Man”, many offshore miles on many top-class boats; Mark Lovelady, WA sailing legend, coach and wind-whisperer; Luke Campbell, tech-savvy navigator ex-M3; Ben Walkemeyer, champion Laser sailor, winner of AS-WA Coach of the Year, finalist for AS Coach of the Year; Laurie Flynne, club-racing hack who is punching above his (diminishing) weight.

The 385 nm Sydney-Gold Coast in late July was a demanding start to the East Coast campaign. With unfamiliar waters and a crew that had not sailed together before, Enterprise nailed the start and exited Sydney Harbour ahead of many larger boats. It was a huge event, CYCA's second biggest, with the four 100-footers (Wild Oats XI, Comanche, Black Jack and Infotrack) attracting plenty of attention. With breezes from 0 to 30 knots from every direction, Enterprise pushed hard and was rewarded with an IRC second in Division 2 (behind sailmaker Carl Crafoord's Cookson 12 “Sail Exchange”) and ninth overall – a reasonable debut. But was it beginners luck?

Next up was the 90nm Flinders Islet Race in mid-September, a sprint down to Wollongong and back. With Jack away touring Italy, Redline Racing's Matt Jerwood was recruited to do some trimming. Defying a forgettable start and finish, Enterprise relished the VMG running down to The 'Gong, then hung tough in gusty 30-40 knot reaching conditions on the way home to record a narrow IRC win in Division 2. It was starting to look like the boat was genuinely in the hunt! No point in throttling back.

Last weekend saw Race 3, the 215nm Newcastle Bass Island Race. Up to Newcastle, down to Wollongong, then back to Sydney – CYCA's version of the 3 Ports Race. With Hughsie on Etchells Worlds duty and Cool-Hand Luke unavailable, Matt Jerwood stayed on and the legendary Jess Sweeney joined the Trekkies as Navigator.

Winning the start at the boat end set Enterprise up for another great race. Leading on IRC for most of Saturday, but with the well-sailed Cookson 12 “Grace O'Malley” clinging on, the Enterprise crew pulled out every trick in the book. In the end, the lower-rating Grace prevailed, becoming the third Division 2 IRC winner in as many races. But Enterprise's consistent 2-1-2 score line, and “wedges” from Ausreo in Race 2 and St Jude in Race 3, allowed the WA boat to extend its lead in the series.

A by-product of the intense battle between Enterprise and Grace O'Malley was the yachts finishing 3rd and 4th overall, behind the TP52s Ichi Ban and Celestial. To everyone's surprise, the result elevated Enterprise to second in the overall CYCA Blue Water Point Score series, behind the undefeated Ichi Ban.

Asked how he was finding the East Coast campaign, Kirke observed, “The logistics of getting the boat to Sydney were quite demanding, but everyone pitched in. Now that we're here and settled, we are enjoying the high standards of competition and race management. Lots of ideas to bring home, that's for sure.”

On plans for the rest of the adventure, Kirke was low key. “We are probably further along the curve than we expected at this point, but you are only as good as your last race. We will keep the lid on it and just keep doing the basics. The primary objective is to get to Hobart – the result will be whatever it is.”

Stay up to date with the voyages of the starship Enterprise by liking the boat's Facebook page “Enterprise Expeditions” and the “Offshore WA” page, where Adventures of a Sailor Grandpa seems to have special access to the inside stories. The Trekkies on Enterprise genuinely appreciate the support and encouragement of the WA Sailing Community as they boldly go.

– Adventures of a Sailing Grandpa (aka Laurie Flynne).