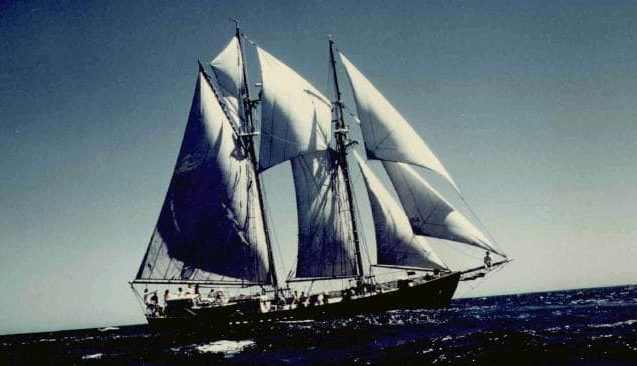 The Schooner Patanela which disappeared off the Sydney coast.

Exactly 30 years ago today, on October 16 1988, a 19-metre schooner called the Patanela set off on a month-long voyage from Fremantle, WA‘s busy port city, with an end destination of Airlie Beach, part of QLD‘s Whitsundays region. But the boat would never arrive, making it an unsolved mystery still baffling people to this day.

In the latest episode of PEDESTRIAN.TV‘s unsolved mystery podcast All Aussie Mystery Hour, we look at the Patanela‘s mysterious final voyage.

The yacht was owned by wealthy businessman Alan Nicol, and the captain was a bloke named Ken Jones, who manned the ship alongside his wife Noreen and their daughter Ronnalee. They were joined by two crew members named Michael Calvin and John Blisset.

Alan alighted at Esperance because he had work commitments and Ronnalee got off the boat at Port Eyre. The boat and Ken, Noreen, Michael and John continued on, seemingly with no issues. Until around 1am on November 8, when Ken, apparently located off Port Botany in Sydney, radioed in to Sydney Overseas Telecommunications Commission (OTC) operator Keith McLennan the following message:

I believe we’ve run out of fuel…we’ve hoisted our sails and we’re tacking out to the east, tracking about zero-eight-zero…our intention is to tack out for a couple of hours, then tack back in. We may need some assistance in the morning to get back into Sydney Harbour.

Keith said than Ken didn’t sound distressed, and the call itself was fairly routine. The weather was overcast yet calm, and the Patanela was more than capable of navigating those kind of conditions.

There was a second call asking for directions to the south coast town of Moruya which was slightly odd as it was in the opposite direction to where they were headed. And in the third call, received at 2am, things got a bit weird. The line was all static, and Ken could be heard saying: “Three hundred kilometres south? Is it? South…”

There was no further communication from the Patanela and the yacht never made it to Airlie Beach. No trace of the boat or the crew has ever been seen again — aside from a buoy marked “Patanela, Fremantle” plucked from the waters off Terrigal, on NSW’s Central Coast, the following year.

There was also a message in a bottle found in 2007, almost 20 years after the boat disappeared. But for all those mysterious details, you’ll just have to listen to the episode. Subscribe on iTunes HERE, or on Spotify HERE. Or, you can just listen / download below.

Listen to the podcast at Pedestrian TV.