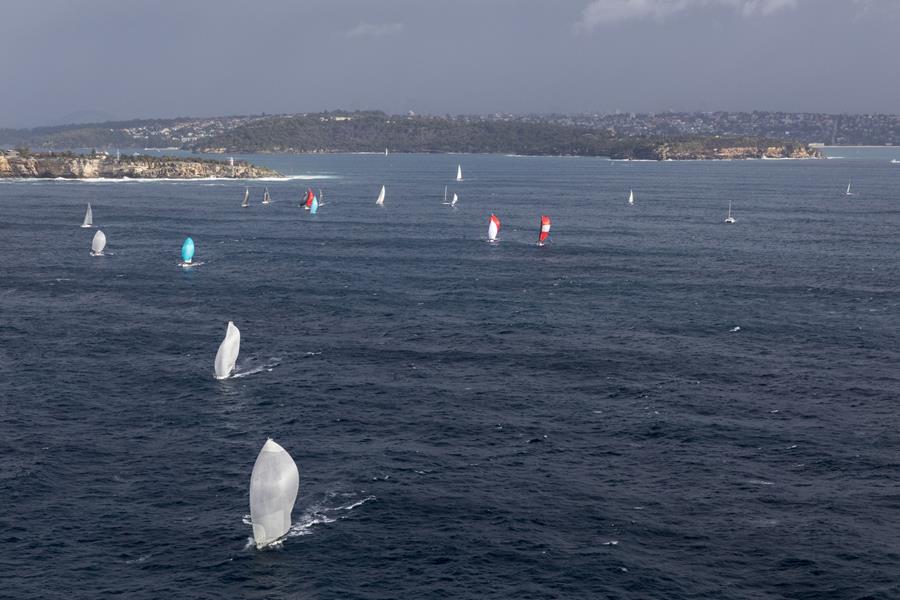 Sydney Noumea Yacht Race crews left Sydney Harbour at 10am on Sunday June 3, 2018 against a backdrop of dark clouds, windy rain squalls, bursts of sunlight and a spectacular rainbow that bridged Sydney Harbour.

Most of the 22 crews opted for a western shoreline start and yachts exited the harbour under spinnaker in south-west winds of 18-20 knots, gusting to 24. Marc and Louis Ryckmans’ Welbourn 50 GBP Yeah Baby skippered by Lindsay Stead was the first to reach the rolling swell at Sydney Heads.

Dockside on the start morning Stead said: “With the delay the race has gone from a downwind to more of an upwind race and while I doubt we’ll tack, I think some of the cruising boats will have quite a tough time. The race record is part of history and I think it will be broken by one of the four boats of similar speed; us, Patrice, Smuggler and Frantic. It will come down to who’s best prepared, the crew work, tactics and the navigation choices.”

Two hours into the Cruising Yacht Club of Australia’s longest ocean passage at 1,064 nautical miles, the frontrunners were heading 46 degrees and maintaining speeds of 14 knots.

Most were able to stay on their fleet in the rain squalls around start time, though photographer Andrea Francolini did capture a dramatic spill on Ian Edwards’ Dehler 46 Wings.

The low-pressure system which delayed the original Saturday start and generated gusts up to 45 knots in the harbour continues to move towards New Zealand. Competitors now face easing conditions as they head north-east, though there’s still talk of multiple attacks on the 27-year-old race record of five days 21 hours 35 minutes.

As well as chewing through as many miles as possible while the best winds are on the race track, sailors are for the first 24 hours on the lookout for floating shipping containers lost from a Siberian ship off Newcastle two days ago. The Noumea race fleet must abide by an exclusion zone between 30 nautical miles east of Anna Bay at Port Stephens and further north at Seal Rocks.

Just after 2pm, She’s Apple II was forced to retire after being dismasted. All crew are safe and well and returning to CYCA.

The fleet can be tracked via this link during the first Sydney Noumea Race in 25 years, thanks to French cruise company PONANT.